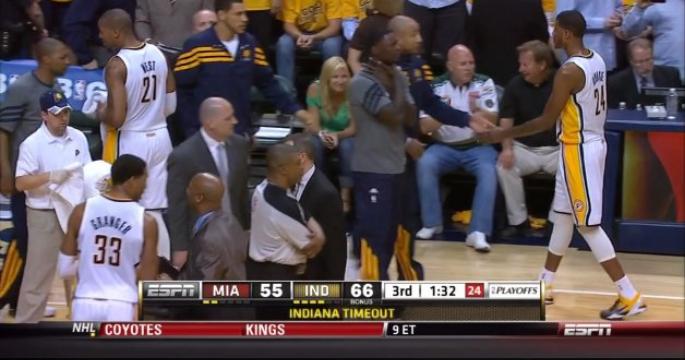 9: Lance Stephenson scored 106 points this season.  LeBron James scored 107 points in the 2011 Finals, and all he’s heard about since is how terribly he played.

7: LeBron may not be the “Chosen One,” but I think it’s fair to say Lance Stephenson wasn’t “Born Ready.”

6: LeBron James has his own Nike sneakers.  Both of Lance Stephenson’s children asked for a pair last Christmas.

5: Lance Stephenson hasn’t been in position to choke since college.  LeBron skipped college, and there isn’t an NBA franchise that wouldn’t pay him $20 million to come choke in their uniform.

4: LeBron James won MVP of the McDonald’s All American game.  Lance Stephenson, according to DraftExpress.com, put on the following display: “bad shots, selfish play, terrible body language, cheap shots to the opposition, plenty of turnovers, predictably followed by him visibly blaming others for his own mistakes.”

3: LeBron James has an Olympic Gold Medal.  Lance Stephenson was cut from the under-18 team.

2: Some folks will tell you that the money doesn’t make the man.  I suppose there’s a lot of truth to that.  However, let’s take two men with the same occupation, and say that one earns 20 times as much as the other.  In this case, money is probably a good measuring stick to determine which man is better at his job, at least.

1: Someone else heckled LeBron one time.  He responded by scoring 24 points in a quarter.  Although he didn’t have an answer in game three, I wouldn’t be surprised if he came up with one in game four.  Mr. Born Ready better hope LeBron doesn’t hang a triple-double on his Pacers and throw him a little shout out in the postgame presser.  That just might be enough to get a non-guaranteed deal terminated by the Executive of the Year, who is known to value character.