Lance Stephenson Has Come A Long Way In A Short Time 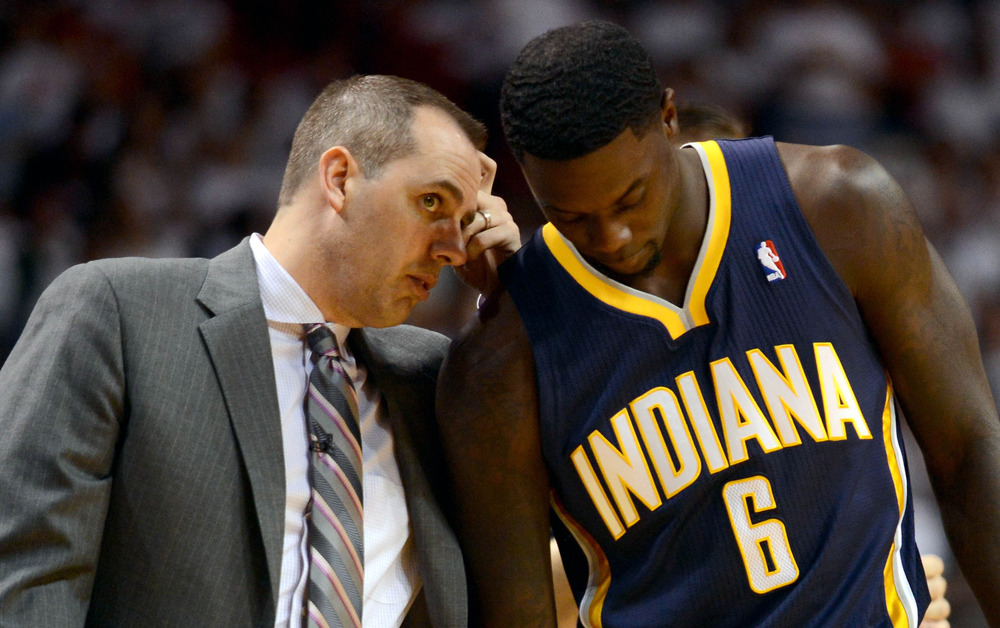 On Tuesday evening, the Indiana Pacers faced the Miami Heat for the first time since being knocked out of the playoffs last May.  They won… easily… for the 11th time in their last 14 games.  Paul George stole the show with his 29 points and 11 rebounds, outplaying the NBA’s consensus best player and reigning MVP LeBron James by a considerable margin.  George is currently amidst a breakout into borderline All-Stardom — he posted eye-popping numbers over 15 games in December, and he’s probably been the biggest reason why the Pacers haven’t been doing things like lose to teams that scored five points in the fourth quarter anymore.  However, there have been other factors, too.  One pleasant Pacer surprise has been the much-improved play of Lance Stephenson.

Lance Stephenson did not see the floor in the aforementioned loss to the Heat that eliminated last season’s installment of the Pacers from the playoffs.  As a matter of fact, he made just two appearances in the entire six-game series, playing for a total of seven minutes and seven seconds, all of them meaningless.  He missed all five of his shot attempts, scored one point, and posted a pair of turnovers to his lone assist.  To the young man’s credit, he did manage to make headlines.  Lance’s choking gesture, which he made from the bench to taunt LeBron James, was all over the internet after Indiana’s game-three victory.  James elected not to rip Stephenson to the press.  Rather, he responded with 40 points, 18 rebounds, and 9 assists in a pivotal game-four triumph.  If you clicked the link I threaded into the text above, you saw that I speculated that this incident may become a factor in whether or not Lance was still a member of the Pacers this season.  Back then, his contract wasn’t guaranteed.

Fortunately for Stephenson, Larry Bird held out more hope for him than I did.  Prior to this season, my primary criticism of the New York playground prodigy was his inability to perform next to players who are better than he is.  Having become familiar with Lance during his days at Coney Island’s Lincoln High School, I knew damn well that the kid wasn’t lacking in talent, nor was he short any confidence.  I watched him tear it up in various exhibitions, even professional ones such as the NBA Summer League.  Lance played particularly well in Orlando in the summer of 2012, but that came as no surprise to me; he was allowed to run the show, which put him in his comfort zone.  Problem is, he wasn’t about to be running any shows come November.  Hell, he’d be lucky to see the floor on a regular basis, I figured.  That had been the case through the first two seasons of Stephenson’s career, when he played only garbage time and displayed little promise.  With his questionable attitude, I thought there was a fair chance that this would be Lance Stephenson’s final NBA season.

On Tuesday night, Stephenson not only played in Indiana’s 87-77 victory over Miami, but he started.  Not only did he start, but he contributed — significantly.  Early on, he helped his Pacers get off to a fantastic start by scoring seven of their first nine points.  He began by banging in a three-point shot from the top of the key, then hit another jumper from the baseline.  Next, he drove to the rack for a layup.  By the time the Pacers concluded their victory, Stephenson had 13 points to go along with 4 rebounds, 2 assists, 2 steals, and not a single turnover.  Ultimately, he’d been the third-best player on the floor for a team that beat the reigning champions.  Less than eight months ago he was spending entire games on the bench, vigorously waving his towel.

It has truly been a dramatic turnaround for Lance, who moved into the starting lineup on November 10th.  That night, he dropped 12 in a slump-busting win over the Wizards.  He hasn’t been back to the bench since.  Remarkably, Stephenson has been able to transform himself from a man who couldn’t function without the ball in his hands into an effective two guard who spends most of the game standing in a corner to space the floor.  And space the floor he has — Stephenson, who had been an 11% three-point shooter through his first two NBA seasons, is suddenly knocking down 40% of his attempts from long distance.  While that may not make him Kyle Korver, it does make him the most accurate Pacer, and certainly forces a defender to respect his range.

In addition to an improved three-point shot, Stephenson has developed other methods to cope with playing off the ball.  One of the things he’s done extremely well this season is run the floor in transition.  Stephenson, like a mini LeBron James, is something of a freight train in the open court.  He obviously handles and passes the ball with incredible precision, making him a great candidate to lead a break, but it’s often his size and speed that really stand out when he takes off down the court.  At 6’5” 228, Lance is a big guard who is awfully tough to stop once he’s built up some momentum.  Though he isn’t the league’s highest leaper, he can finish above the rim with power or below with finesse.

At the other end of the floor, Stephenson uses his size, length, and quickness to harass opposing guards.  While he’s hardly a defensive mastermind with veteran understanding of various schemes and concepts, he has played hard enough and well enough individually on the flip side of the ball to earn the trust of his coach, Frank Vogel.  Here’s what Vogel had to say about him after a recent victory over the Phoenix Suns, via Indy Corn Rows:

“Defensively he continues to grow. His mistakes are being limited, he’s becoming more solid. He actually made the play of the game defensively on a weak side sink. We’ve been on him for three years on his weak side and it was probably the best weak side play he’s made all year, stopped a run, led to a transition bucket for George Hill. Just a big sign of growth.”

Oh, and I almost forgot: that questionable attitude?  Haven’t heard a word about it.  Not since last spring.

Certainly, Lance Stephenson remains a work in progress.  He still experiences lapses in judgment on a regular basis, mostly having to do with shot selection, over dribbling, or ball watching.  In Tuesday’s big win over Miami, for instance, he fired a few questionable jumpers down the stretch.  Surely he’ll continue to do such things as he forges along the learning curve, but that’s just the normal growth process that most young players have to go through.  What’s been so amazing to me about Stephenson’s whole metamorphosis is that he literally looked like a soon-to-be NBA washout approximately 225 days ago.  Now, while he maintains some of his old flaws, he absolutely looks like a legitimate NBA player who’ll be around for years to come.  To see such an unsuspecting prospect blossom so quickly, it’s rather unusual.

Rather enjoyable, too.  I doubted Lance hard — not hated, but doubted — and now he’s become one of my favorite role players in the league.  In a short time, he certainly has come a long way.