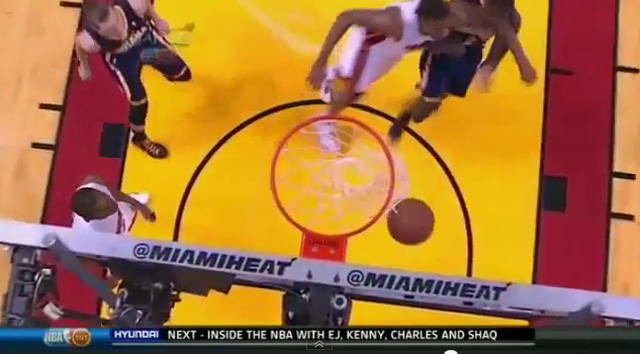 Have you learned to enjoy a good ol’ fashioned blowout yet?  If not, these playoffs may be leaving you asleep with the remote control in your hand.  For those of you who didn’t make it to the latter stages of Miami’s trouncing of the Indiana Pacers, here are three videos you’ll want to watch, along with my super-brief thoughts on each one of them.

***Dexter Pittman’s elbow did not make my list of nine reasons why Lance Stephenson shouldn’t have taunted LeBron James, but it vaulted all the way to number one last night.

I’m not advocating nasty retaliations of this nature (and this play really was dirty, no Steve Kerr overreaction), but this is the situation in which Lance put himself by being a toolbag. Hopefully he comes away injury-free, but also having learned his lesson. As for Dexter Pittman, he ought not to be suspended. As Charles Barkley so humorously put it, “that would be punishment to Indiana. He’s one of their best players.”

If you’re Leandro Barbosa you’ve got to find a way to score on a kickless Mike Miller. Miller has never been known for his defense (even with both sneakers on), and Barbosa had three chances to attack. First, he was unable to evade Miller in transition. Next, he opted out of an iso and passed the ball to George Hill. Lastly, he settled for a three-point shot despite having six seconds with which to work. Rather embarrassing sequence for Barbosa.

***LeBron James is really good. Like, good enough to redirect an awful pass by Mario Chalmers directly into the hands of a streaking Dwyane Wade whilst falling out of bounds.

Other stuff LeBron James is good enough to do? How ’bout come within three assists of consecutive 30-point triple-doubles in back-to-back playoff games with enough pressure resting squarely on his shoulders to create a sufficient supply of diamonds for an entire rap label?