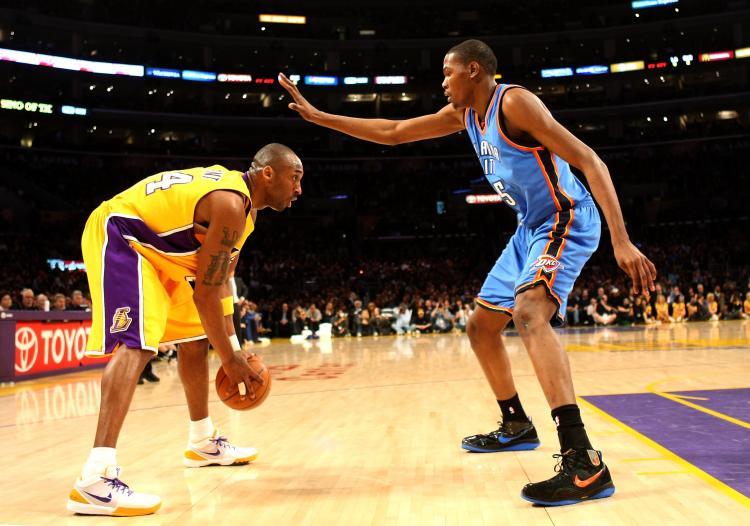 Youtube: Whether he and his Thunder (how stupid did that sound?  No more singular team names, please) trail by one, two, or three (or even if the game is tied, as it was in this case) Kevin Durant’s preferred method of being an icy-cold motherf@cker is the three-point shot.  Mysteriously, Ron Artest failed to stay within arm’s length.  Durant didn’t really even have to make a move, and by the time Artest got a hand in his face the ball was well on its way to the hoop.

Yahoo!: So, um, why exactly does Pau Gasol not want to be traded, again?  Dude should ask Kobe, “you want Kwame back?”  Or he could simply remind Bryant, preferably via the media, who it was that threw the ball away late in game two.  Or who has missed 62 percent of his 96 shots in the series, including all but one of his 12 three-pointers.  Gasol could also take his criticism the historical route and mention the fact that Kobe has never won sh!t without himself or Shaquille O’Neal.  Pau won’t do any of this, of course, because he isn’t a d-bag… but it’s funny to imagine what would happen if he did.

Youtube: If an old man happens to dunk on you in a pick-up game, he’s probably Kyrie Irving.  Watch out for his nasty crossover move at 3:37… might get your ankles broke.

InsideHoops: I’m starting to get really curious as to where Russell Westbrook finds his clothes.  Someone with media credentials should probably ask about this, and kindly tell him he looks like a fool.  Swag-O-Meter, you say?  No.  I don’t give out negative ratings.

Atlanta Journal Constitution: Larry Drew will coach the Atlanta Hawks next season.  The team’s next move will be an attempt to secure the entire roster through infinity.

SBN: The Spurs were able to hold the Clippers scoreless for 14 straight possessions in the third quarter of yesterday’s comeback victory.  Is that a big deal?  I’m going to have to disagree with the author here and say it isn’t.  The Clippers are a drought waiting to happen, and that’s been their problem all season long.

Twitter: According to this guy, Kobe Bryant’s 2-10 fourth quarter was part of a chokejob like only two others in Laker history.  According to the same guy, Kevin Durant and Russell Westbrook just did something last done by two dudes named Michael and Scottie.  I hear they were pretty alright.

WNBA.COM: Did you know the WNBA season tipped off on Friday?  Neither did I.  I wasn’t aware that Seattle got to keep its WNBA team, either.  That’s just a slap in the face.  It’s gonna be funny when Shawn Kemp’s daughters make up the entire starting frontcourt, though.

ESPN: Lots of interesting nuggets in this little article which dubs Kevin Durant “MVP of the playoffs.”  First, it notes the defense he played on Kobe Bryant last night.  Later, Russell Westbrook seems to express an understanding of Durant’s status.