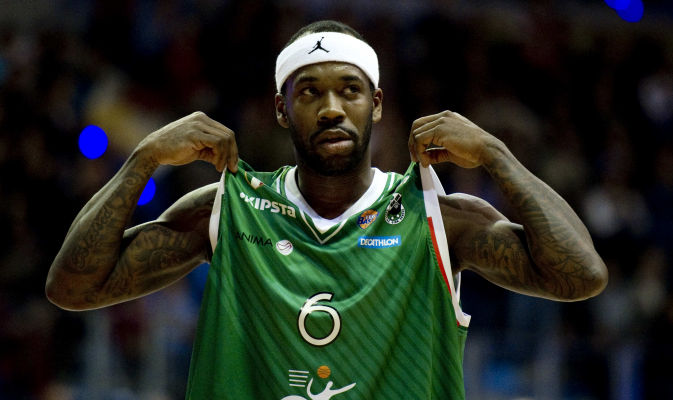 A few days ago I reported that former Sacramento King Quincy Douby had broken the Chinese Basketball Association’s single-game scoring record with a 75-point outing.  Oddly enough, it turns out he would only be the first former King to reach an international scoring milestone this week.  Yesterday, Montepashi Siena’s Bobby Brown, who played 113 NBA games between 2008 and 2010, tied the Euroleague’s record for points in a game* as he dropped 41 on Fenerbahce Ulker, who got 31 big ones from Bojan Bogdanovic.  If that names sounds familiar to you, that’s probably because Bogdanovic scored 11 points to help Fenerbahce defeat the Boston Celtics in a preseason game last October.

Brown had his big game in a 98-92 victory.  He made 8 of his 12 two-point attempts, 4 of his 6 three-point attempts, and all 13 of his free throws to lead Siena back from an eight-point fourth-quarter deficit.  He tacked on seven assists for good measure, and it’s also worthy of note that his 41 points represent the most ever scored in a top 16 game (from what I gather, the top 16 is like the first round of the playoffs).  The previous record of 37 had been held by Sarunas Jasikevicius, a onetime Indiana Pacer, since 2004.

Though he was unable to stick in the NBA, Brown is an exciting scorer with a mean crossover and explosive athleticism (as demonstrated by his monster dunk at 3:20).  He once dropped 21 on the Lakers, and if he has many more games like this one he just might earn himself a chance to play them again.

In other European basketball news, my main man Sonny Weems is doing Russian Papa John’s commercials with hot tubs and girls in bikinis.  And to think that people act like it’s a demotion when these guys go overseas…

*It seems that the Euroleague, founded in 1958, only acknowledges games from 2000 and beyond in their official book of records.  Multiple players scored more than 41 points prior to 2000, but Brown has still been reported by their official site as having tied the “all-time” record.