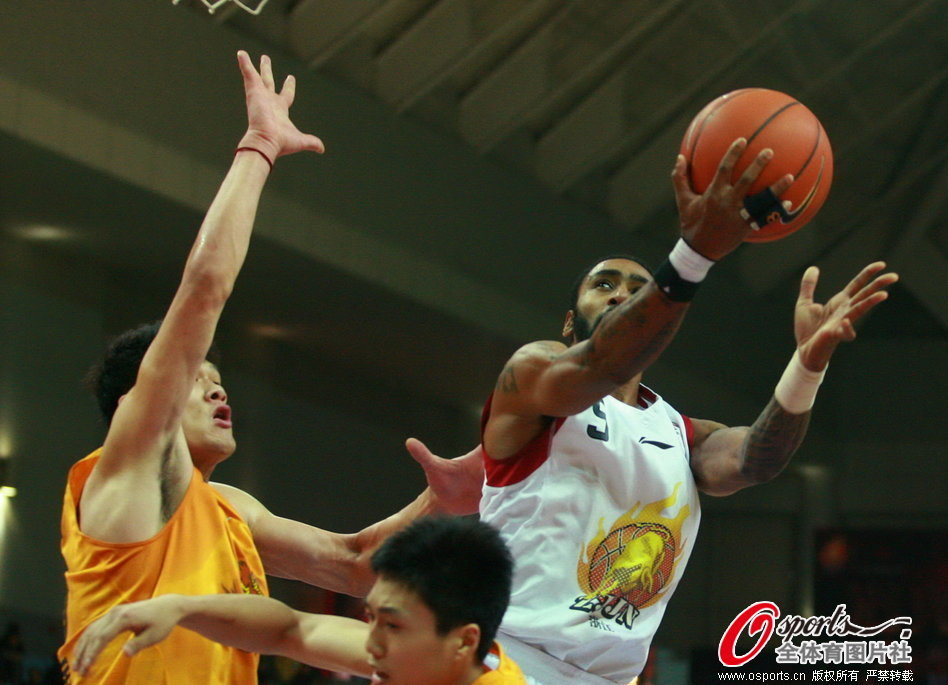 Somewhat vaguely, I can recall Quincy Douby being in the NBA.  I remember watching the strikingly-skinny off guard play sparingly for the Sacramento Kings, who made him the 19th overall selection in the 2006 draft.  Somewhere, hidden deep in a maze of folders on one of my old computers, I’m sure I have at least 20 or 30 seconds of Quincy Douby highlights.  I think they’re from a preseason game, as I recollect that the court had two three-point arcs.  Anyway, looking back at his game logs… I wouldn’t have guessed that his career lasted 143 games, nor that he once scored a career-high 32 points against the LA Lakers.  Granted, it was the last game of the ’07/08 season and the Lakers won by 23… but still, I’d contend that anyone who can come off the bench to make 11 of 22 shots in any NBA game knows a thing or two about putting the ball in the basket.

Turns out Quincy Douby does in fact know a thing or two about putting the ball in the basket.  This morning, he set a Chinese Basketball Association record by scoring 75 points in a 154-129 victory over the Shanxi Brave Dragons.  Remarkably, Zhejiang Chouzhou’s Douby surpassed the previous record of 71 points (Andre Emmett) in just 36 minutes of playing time.  He was on the bench for the first nine minutes of the second quarter and checked out for the final time with about three minutes left in the fourth.

NBA, ABA, or CBA, to score 75 points in three quarters’ time with other professional basketball players trying to stop you… it’s a pretty impressive feat to say the least.  Amazingly, Douby did so on 25-38 from the floor and 16-20 from the free-throw line.  He knocked down 9 of 15 threes and had just one turnover to five assists.  To put his efficiency in perspective, never has anyone scored 75 points in an NBA game on fewer than 46 shot attempts.  That’s how many Kobe took in his 81-point game, along with the same number of free throws as Quincy.

And yes, I have a video.

As you can see, Quincy Douby scored in just about every way possible (he even converted a four-point play).  His single most spectacular highlight was obviously the poster dunk in transition, which very pleasantly surprised the sh!t out of me.  It’s worthy of note that he threw that down over the opposing center, 6’9” Charles Gaines, who had 60 points and 29 rebounds.

That’s correct — not only did Quincy Douby go off for 75 in this game, but Charles Gaines, a CBA veteran and former D-Leaguer, came within one board of hanging a Wilt-like 60/30 on Eddy Curry.

Finding all of this hard to comprehend?  Take a moment to think it over, because stuff only gets crazier.  With his 75 points, Quincy Douby now holds CBA scoring records for the regular season, finals (53), and All-Star game (44).  Needless to say, he’s something of a legend in the Far East.