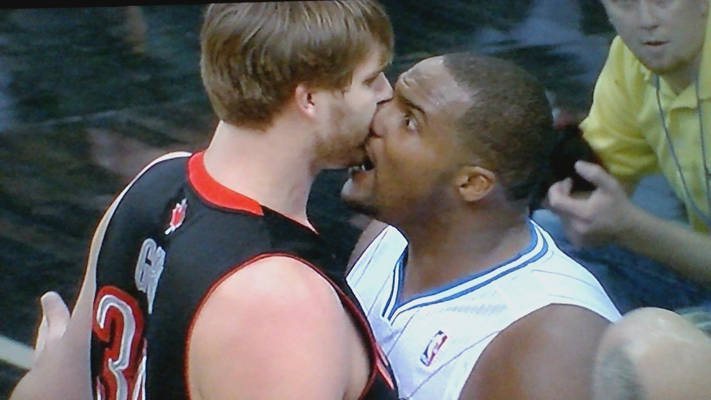 Glen “Big Baby” Davis is a really, really, really weird dude.  On top of being a really, really, really weird dude, he also has a volatile temperament.  Davis leads the Orlando Magic with three technical fouls this season, and he has always been known to let his emotions get the best of him.  As a Boston Celtic, Big Baby once cried on the bench after Kevin Garnett gave him a scolding.  He’s also faced a variety of fines and suspensions stemming from various instances in which he’s allegedly done such things as direct obscene gestures at fans and scream at his coach.

On Thursday, Davis picked up his most recent technical foul with just one second left in the first quarter of what would ultimately become a two-point loss to the Raptors.  Having been called for a travel during an attempted pump fake and drive to the basket, Big Baby took exception to the way that his defender, Aaron Gray, continued to play through the whistle.  Gray, presumably under the impression that a foul had been called on Toronto, hit Davis across the arms to prevent him from releasing a shot attempt.  Davis then began to complain to a nearby official, and apparently said something that upset Gray.  Gray began to walk toward Davis with his palms facing upward as if to say, “what in the hell are you mad about?”  What happened next is further confirmation that Davis is, as I said, a really, really, really weird dude.

Interesting argument, Glen, but I doubt that it’ll get very far with the league office.  You literally pressed your open mouth up against Aaron Gray’s face, which is kind of disgusting and most certainly warrants a technical foul.

In the words of Charlie Murphy, Glen “Big Baby” Davis is a habitual line stepper.