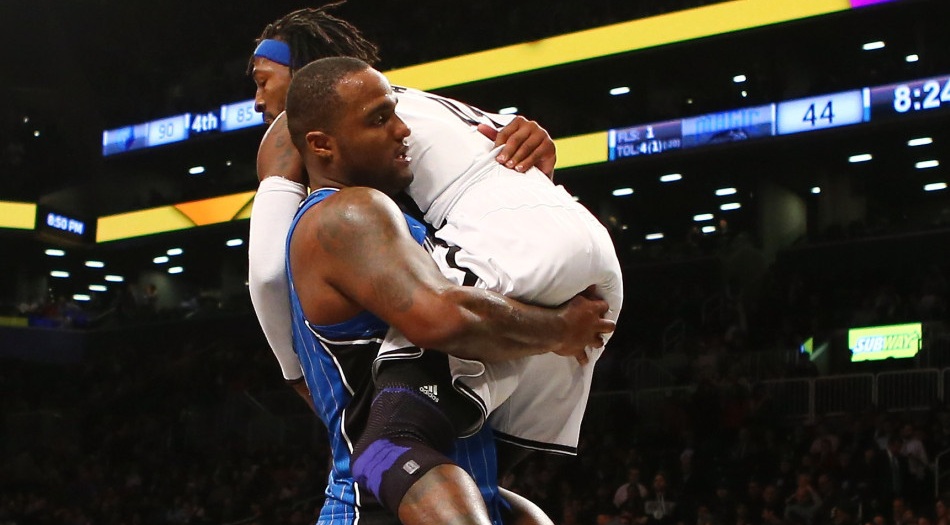 Anyone who plays basketball in front of thousands of people for a living is going to end up getting photographed and/or videotaped in some compromising positions and/or doing some pretty weird looking stuff.  It’s simply inevitable (…isn’t that right, Kobe Bryant?).  That being said, Glen Davis seems to appear in various types of unusual photos and videos much more frequently than his peers.  For instance, I recently posted a video of Davis getting his open-mouthed face so close to that of Aaron Gray that it looked like he was trying to eat the Raptors’ center.  Now, just a few days later, he’s at it again (not eating people, just doing something strange):

First of all, Orlando’s 20-point loss to Brooklyn appears to have had all the lulz and I officially regret not watching it.  Secondly, how is this not a foul?  I understand that Davis prevented Wallace from landing awkwardly, but you can’t grab people out of midair, throw them over your shoulder like a sack of potatoes, and place them out of bounds, regardless of whether or not it impacts the play in any way.

Also, Glen, get your hand out the damn cookie jar.