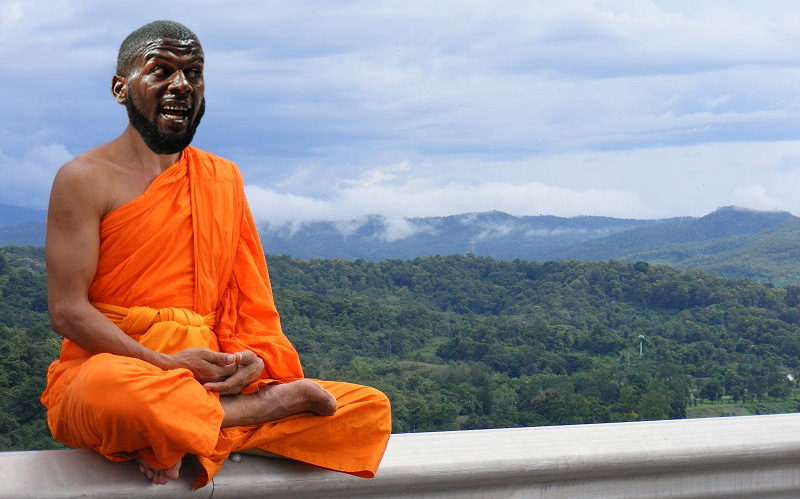 Yoga, as defined by Wikipedia, is a generic term for a variety of physical, mental, and spiritual disciplines originating in ancient India.  People practice yoga for an assortment of purposes, but many who participate do so to relieve stress and become more physically fit.  Yoga typically involves contorting the body into a variety of poses which aim to increase strength, flexibility, and balance.  Breathing technique is also a primary focus, and meditation may take place.  Today, there are an estimated 18 million yoga enthusiasts in the United States, and depending on your definition of “enthusiast,” the Atlanta Hawks’ Ivan Johnson is one of them.  From Grantland’s Q&A with Al Horford…

What about Ivan Johnson? On the court he looks pretty scary.

Ivan can be super laid back, real cool. Actually, we did yoga this morning. Me and him together. But, if you, like, make fun or say something he doesn’t like, he can get in your face. He can step up to you.

Whose idea was it to do yoga?

Our trainer. As a team, once every week or two we’ll have an instructor come in, and whoever wants to do it can do it pre-practice. So a few of us always go in there. And it helps us. Downward dog and all that. [Laughs.]

Well there you have it!  Ivan Johnson — the scariest player in the NBA, who is banned for life from the Korean Basketball League, has shattered a backboard, and flips the bird at approximately one third of all people he encounters — has practiced yoga at least once, presumably whilst wearing his diamond-encrusted grill.  If knowing that doesn’t make you at least a little bit happier than you were before then I’m honestly not sure what I’m even here for.

By the way, Ivan, sir, if you happen to see this just know that I am most certainly NOT making fun of you.  I’ve done yoga myself, multiple times!  I think it’s absolutely fantastic, and… please don’t hurt me?!