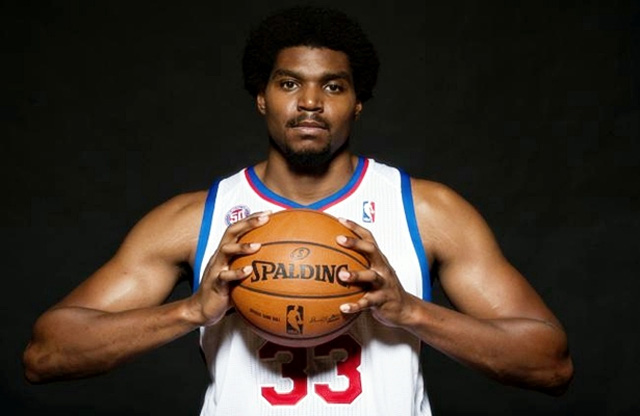 Ball Don’t Lie: Andrew Bynum’s former neighbors have accused him of a lot of things.  These things range in seriousness from not at all serious to pretty damn serious and involve guns, dogs, cars, fences, marijuana, and loud music.  Bynum denies it all and claims that the neighbors are the ones who used to harass him by throwing pennies at his Ferrari and banging the side of his house with a stick.  They’ve sued each other.

The Basketball Jones: Emeka Okafor helped the Washington Wizards win their first game of the season last night, causing one guy to get so excited about the prospect of high-fiving him that the guy nearly fell over a railing.  Fortunately, Okafor saved him from possible injury and further humiliation.

The Point Forward: Damian Lillard is afraid of statues, which might explain why he went 6-21 in a loss to the Wizards yesterday.  Obviously, Lillard knows he has to start playing worse in order to avoid the possibility of receiving and/or being made into a statue.

The Diss: This site uses the same WordPress theme as mine and regularly conducts league pass power rankings.  They also do games of the week, and in a very similar way to how I do it.  I’m not nearly famous nor arrogant enough to suggest that I’m being copied, so I’m just going to assume I’ve been cloned.

Fox News: Ricky Rubio has been cleared to participate in full-contact practices.  As much as I enjoy his Footlocker commercial, it’ll be nice to see the enthusiastic young man on TV for basketball reasons.  CAN’T WAIT.

Pro Basketball Talk: As I expected, Gerald Wallace has been warned for his late-game flop against Carmelo Anthony and the Knicks.  No additional fines for Reggie Evans, though?  He was like a fish out of water in that game.

Ball Don’t Lie/It’s Always Sunny In Detroit: Professional sports can be awfully grueling sometimes.  For example, Kris Humpries needs a tetanus shot and Amir Johnson could probably use a set of crutches and a pair of high tops.

Eye On Basketball: Amare Stoudemire is willing to come off the bench.  Unfortunately, it’s probably safe to assume that he remains unwilling to rebound and play defense.

USA Today: Michael Jordan, a notoriously poor dresser, was recently given the boot from a Miami Beach country club for going golfing in his cargo shorts.  Sounds like the people running this country club are a little too uptight.  I mean, it’s Michael Jordan — just be thankful he didn’t wear this, or this.