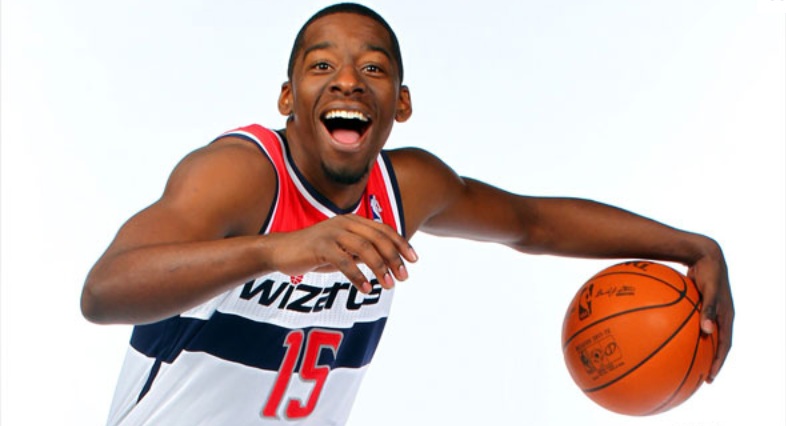 Wizards win! On their 13th try, the 2012/13 Washington Wizards finally won a game of basketball.  They did so at home against the Portland Trail Blazers, who shot 34.9% from the floor in the 84-82 upset.  Washington nearly blew it by failing to score as the Blazers rattled of 16 straight, but they were able to hang on thanks to a timely three from Jordan Crawford (the only Wizard to score a field goal in the final 9 minutes and 30 seconds of this game) and some poor Trail Blazer execution.  Despite multiple chances, Portland was unable to score a game-tying bucket after Washington took a two-point lead with 39 seconds to play.  The Wiz nearly blew it as they were unable to make a simple inbound pass with a half second on the clock, but Derek Fisher has been signed by the Mavericks and was therefore unable to help the Blazers send the game to OT with just a third of a second to work with.

I’ve said it time and time again this season, but DeAndre Jordan has come a long way. A long, long way.  Remember last spring, when he used to be removed from any and all crunch-time situations in favor of Reggie Evans?  Just six months ago DeAndre couldn’t even be relied upon to bring consistent energy, and he was extremely mistake prone.  Now he’s helping the Clippers snap four-game losing streaks by dominating one of the league’s most powerful front lines down the stretch.  As the Clippers got themselves a much-needed 101-95 victory over the T-Wolves, who have essentially haunted them over the last year or so, DJ scored two dunks in transition, made a free throw, ripped three offensive rebounds, and assisted Blake Griffin with a nice bounce pass… all in the final five minutes.  Two of his offensive boards led to Clipper scores, without which they likely would’ve lost the game.  As much as it pains me to admit it, DJ (16/6) outplayed Nikola Pekovic (11/10) not only down the stretch but throughout the entire evening.

Rajon Rondo and the Celtics can simply focus on basketball now as Rondo’s streak of 37 games with 10 or more assists has come to an end.  Doc Rivers’ crew may have to do so without Rondo for a game or two, though, as he was the primary instigator in a wild shoving match that ended up spilling over into the stands.

First thing here: if you consider that “a hard foul” by Kris Humphries, you’re either A) Tommy Heinsohn, or B) a goddamn pussy.  Straight up.  That’s nothing more than a normal, everyday, run-of-the-mill shooting foul by Kris Humphries.  There was no basis for Kevin Garnett’s overreaction, nor was there reason for Rondo to go after Humphries “in defense” of his teammate (he was really just mad about this).  I’ve seen quite a few people (mostly Celtics fans) trying to sell this as toughness, comradery, and even something that “would be appreciated by Red Auerbach.”  Get the f@ck out of here with that nonsense.  This is an overreaction from Kevin Garnett to a standard basketball play by Kris Humphries followed by an irresponsible decision from Rajon Rondo.  Simple as that.  The Celtics were down 16 at home, they were upset about it, and Rondo allowed his temper to get the best of him, resulting in his ejection and probable suspension.  And you’re trying to tell me Red Auerbach would be in support of such foolishness?  As Doc Rivers did, I think Auerbach would’ve recognized that there was nothing tough about the Boston Celtics last night.  Toughness would’ve been KG getting his melodramatic ass up off the floor and boxing Andray Blatche, who grabbed 10 rebounds in the first quarter of the game, the f@ck off the glass.

For the record, I wouldn’t suspend anybody for this so-called “brawl.”  No punches were thrown, so mandatory suspensions don’t come into effect.  That being said, there’s no way Rondo doesn’t get at least one game for lighting the fire.  Also for the record, I would not have ejected Kris Humphries from the game.  What did he to do earn more than one technical?  The play on Garnett certainly didn’t warrant anything beyond a personal foul.  If you want to give him a T for engaging with Rondo then so be it, but he shouldn’t have been thrown out of the game.  Lastly, if you’re going to toss Gerald Wallace, why does KG get to stick around?  Their roles in the skirmish were similar, except it was Garnett’s overreaction/arguable flop that inspired the fight in the first place.  If anyone deserved to be tossed it was Rondo first and Garnett second. 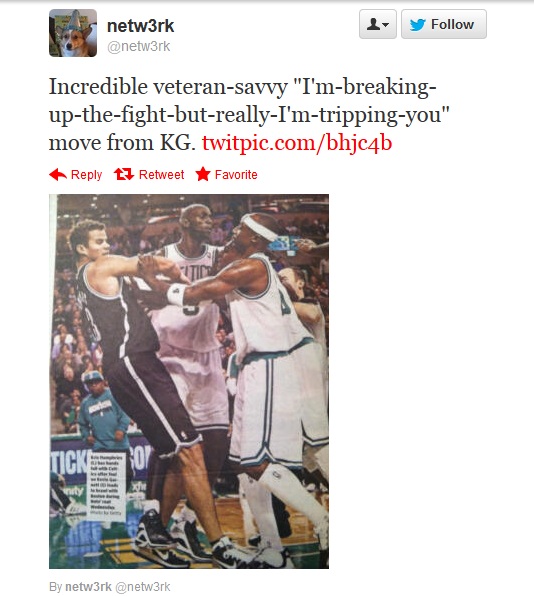 How come I haven’t seen anything about Josh Smith this morning? While his shot selection remains the worst in basketball, he very nearly had a historic line on Wednesday night as the Hawks edged the Bobcats 94-91.  Smith, who always has been remarkably versatile, finished with 17 points, 13 rebounds, 6 assists, 3 steals, and 5 blocks.  A healthy double-double, obviously… but note that he fell just 2 steals shy of a 5X5.  Rarely does any player even get close to recording a 5×5, and it’s only been accomplished 14 times in the history of the NBA.  For Josh Smith to score 17 points, grab 13 rebounds, lead his team to victory, and come within 2 steals of one of the most seldom-seen statistical feats in basketball… I’m just surprised I haven’t been hearing his name today.

Sir Charles Villanueva, people. Where the hell did this man come from?  Having hardly played since joining the Pistons, Villanueva has now scored in double figures for three consecutive games.  CV dropped a season-high 19 in Detroit’s 40-point victory (not a typo) over Phoenix, hitting 4 of 5 attempts from three-point land in front of 50 or 60 of the most hardcore sports fans in the D.  Also, Kyle Singler.  He has his own streak of three consecutive double-digit scoring games going on right now as he seems to be securing his starting spot.

James Harden’s return to Oklahoma City gets mentioned after Charlie Villanueva because it went just that uneventfully.  After having his confidence rattled early as he had consecutive shots swatted away by Russell Westbrook and Serge Ibaka, Harden was never able to get himself or his team on track.  By the numbers, he had the second-worst shooting game of his professional career (3-16, 18.75%).  He did score 17 points by virtue of 11 free-throw attempts, but he had his shot blocked what I assume to be a career-high 7 times.  Harden also struggled in his assignment to guard his old friend Kevin Durant, who exploded for 37.  The Rockets lost 120-98.  Kevin Martin had 17.

Box Score Observations: Steve Novak felt right at home in his old Wisconsin stomping grounds as he made 5 of 7 threes on his way to 19 points in a blowout Knickerbocker victory over the Bucks, who failed to compete despite the scoring efficiency of Brandon Jennings and Monta Ellis (35 PTS, 12-19).  Kyle O’Quinn’s career-high 6 points were not enough to lead Orlando past San Antonio, as the Magic lost by 21 at home.  The Bulls beat the Mavs bad enough to bring about 12 minutes and 27 seconds of Nazr Mohammed.  Robin Lopez played like his brother as he recorded 18 points and 6 rebounds in a 12-point loss to Utah.  Zach Randolph had 4 Z-Bounds in a 103-82 triumph over the Craptors, who have lost six in a row.