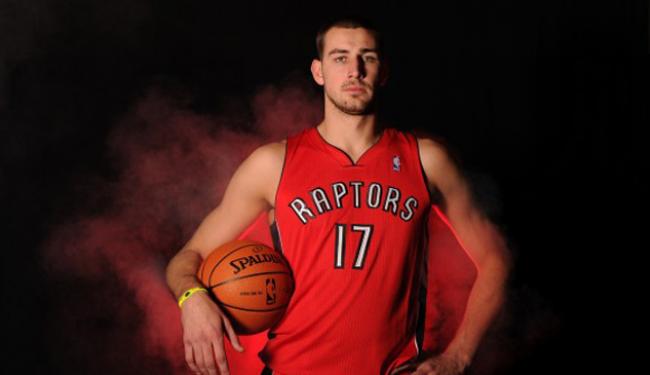 Spurs 111, Raptors 106
***I’m not sure who’s been better at finding painful ways to lose lately, Toronto or Washington.  In their previous game, the Raptors fell to the Bobcats at the buzzer… but the NBA has admitted that a last-second foul should’ve been called — a foul that would’ve sent Andrea Bargnani to the stripe with a second to go in a one-point game.  Based on the way he shot the ball on Sunday, Bargnani probably would’ve bricked a pair anyway… but that’s another story.  The night before they got shafted in Charlotte, the Raps gave up 33 points to the Sixers in a come-from-ahead defeat.  They’ve also been through the triple-OT loss to Utah and watched George Hill beat them at the buzzer on opening night.
***The good news, Craptor fans, is that these losses aren’t really important.  What actually matters is the development of young players like Jonas Valanciunas, who gave Tim Duncan just about all he could handle down the stretch on Sunday.  Valanciunas scored 11 of his career-high 22 points in the game’s final 15 minutes, and he did it in a variety of ways.  Valanciunas was extremely impressive in the last 5 minutes of regulation, when he scored 7 of 9 Craptor points.  After sticking a foul line jumper, Jonas rolled to the rim and finished a layup plus the foul.  He converted the free throw, then knocked down another couple to put the game in OT.  At the other end, Duncan did score 26 points, but Valanciunas stifled him in the post with 30 seconds to go in regulation.  Timmy had one late post up where he simply took the rookie to school, but other than that the majority of his buckets came early.

***You don’t think Gregg Popovich has clout in this league?  In the closing minutes of regulation, Coach Pop made his way to halfcourt and hollered at an official about a Jonas Valanciunas screen that had led to a Toronto score.  Replay showed that the screen was legit, but Pop continued to plead his case.  Two possessions later, Valanciunas made his way to the perimeter to set the same exact screen.  He was whistled for an offensive foul.  Replay showed incidental contact at best.
***Fantastic stuff from Manu Ginobili…

***Andrea Bargnani, 2-19, and Jose Calderon, 3-14, took 33 shots and only made 5.  DeMaR DeRoZaN also missed 17 shots by himself, but that was different.  DeRoZaN consistently attacked the basket with an admirable degree of ferocity despite receiving very little love from the officials.  It was DeRoZaN’s fight that put this game into a second overtime, plus he had 28 points.  So he gets a free pass.

Knicks 121, Pistons 100
***The most interesting thing that happened in this non-contest was probably Rasheed Wallace getting his 17,984th career technical foul, and even that wasn’t very interesting.  All he did was yell “BALL DON’T LIE,” which is something he’s been doing almost perpetually since 1974.  He actually did it again later in the game and they let him get away with it, as they should.
***Wait, I take back what I said about this game being completely uninteresting: CHARLIE VILLANUEVA SIGHTING!

^That was actually his second field goal of the season, but just one of his seven for the game.  Villanueva dropped 17 off the Piston bench, his most in nearly two years.  Charlie and I maintain fond memories of his time spent in Milwaukee, when his play earned him a truckload of money and me a trip to the fantasy league championship.

Nets 98, Blazers 85
***Sasha Pavlovic scored his first bucket of the game on a 13-foot jump shot at the 9:49 mark of the fourth quarter.  Not only was this Sasha’s first field goal, but the first for Portland’s bench.  Blazer reserves ended up scoring a total of 9 points on 14 shots.
***This was a tie game at the end of the third quarter.  When you take into consideration what the Portland bench did (or didn’t do) as well as the absence of LaMarcus Aldridge, it isn’t as bad a loss as the box score makes it out to be.
***Reggie Evans and Andray Blatche came up big for Brooklyn.  The two of them recovered 8 offensive rebounds — one fewer than Portland’s total of 9.  Blatche contributed 13 points and Reggie grabbed 14 boards.

Celtics 116, Magic 110
***Why exactly the Celtics needed an overtime to beat the Magic, I’m not really sure… but I can tell you this: Rajon Rondo’s double-digit assist streak has been extended to 37 games ($1.60 was your total in Rondo dimes, and they were all legit).  I’m petty sure that’s all anyone in Boston cares about right now anyway.
***Jameer Nelson fakes, Paul Pierce folds.  They call it an ankle breaker, but that looked more like a knee dislocater.  Paul did get up and keep playing, which leads me to believe that the training staff left his wheelchair in Boston.
***How NOT to stop the ball in transition, starring Glen Davis, Jameer Nelson, and JJ Redick.  I know he’s fat, but you can’t honestly tell me Big Baby couldn’t have run a little bit faster there.  If Rondo is holding a hotdog this goes much differently.
***Jared Sullinger has 23 offensive rebounds this season.  The rest of the Boston Celtics have 78.  Think about that for a minute.

Sixers 104, Suns 101
***If Michael Beasley has any passion for the game he’ll spend the entirety of his Monday working on right-handed layups.
***Did Goran Dragic kick Jrue Holiday’s dog or something?  In this narrow Sixer victory, Holiday spun, dunked, and ultimately dropped a career-high 33 points on The Dragon.  On one occasion Holiday literally dribbled away an entire 24-second clock attempting to break Goran down off the dribble.  That possession made his career night seem blatantly personal.
***YEAURGH!  That’s Marcin Gortat being very excited about his 11 shot attempts, 7 of which were converted to points.

Thunder 116, Sixers 109
***Thaddeus Young and Evan Turner combined for 55 points, 20 rebounds, and 8 assists.  Unfortunately for them, Russell Westbrook and Kevin Durant are pretty good at combinations, too.  They accounted for 67 points, 13 rebounds, and 14 assists.

Bobcats 108, Wizards 106
***How close were the Wizards this time? Within one free throw.  It was a Chris Singleton free throw, and it came between two other Chris Singleton free throws.  Chris Singleton shot these three free throws with under a second left in the first overtime, after he was fouled on a three-point attempt (a distance from which he shoots 16.7% this season) by supposed-Bobcat but apparent-Wizard Jeffery Taylor.  He made two of three, which was enough to prolong the agony, but not to win the game.  Instead, the Bobcats have matched their win total from last season.
***Nene was fantastic in this game.  He scored 19 points, made tons of great passes, and threw down two monster dunks in overtime.  It’s quite possible that he also suffered permanent damage to every part of his body due to surpassing his minutes limit, but that’s Randy Wittman’s fault.
***Washington’s bench out-scored Charlotte’s starters and they still lost.  The Wizards also had 18 offensive rebounds to the Bobcats’ 5, and yes, they still lost.

Hawks 103, Clippers 94
***The Clipps aren’t doing so hot away from the Staples Center.  There’s zero offensive continuity, Chris Paul is using the ball to pound holes in the floor, and Jamal Crawford has suddenly gone cold (19 of his last 53).  This was their third loss in as many games, and the final score makes it out to be a lot closer than it really was.
***Zaza Pachulia basically matched Blake Griffin’s offensive production (19 to 22) on 8 fewer shots.  Pachulia also ripped 12 boards, making this the first time since 2007 that he’s had as many points and rebounds in the same game.
***Mini LeBron does some full-size things…

Heat 110, Cavaliers 108
***Is Ray Allen not the perfect teammate for LeBron James?  If only they’d been brought together sooner, LeBron would’ve been spared a whole lot of grief (seriously, how many rings might he have and where might he play if Larry Hughes and Boobie Gibson were Ray Allen?).

Lakers 115, Mavericks 89
***In the NBA, there are many ways to lose.  Getting out-scored 65-38 in the first half is a pretty good one.  To be fair, Ron Artest made six shots in a row during that first half, which indicates to me that fate was simply on the side of the Lakers this Saturday.
***OJ Mayo’s season-long streak of 13 consecutive games with a three-point basket has come to an end.

Kings 108, Jazz 97
***Good DeMarcus Cousins.  Bad DeMarcus Cousins.  Will we ever see the good without the bad?  I have my doubts… but check out his crossover on Al Jefferson.  Goddammit, DeMarcus, you’re so big and talented!  Leave the officials alone, quit being so mopey, and stop letting your team down.
***Thomas Robinson went 4-4 for 9 points in this game.  Sadly, it was his second-best showing since college.

Warriors 96, Timberwolves 85
***This game got lost in the hype surrounding Harrison Barnes’ dunk.  I watched the whole thing and about all I can tell you about it is that Carl Landry had a real nice outing off the bench (18/9).  Landry wasn’t perfect, however; watch here as Kevin Love successfully pump fakes him twice.

I specifically recall seeing this play because it inspired some half-witted commentary from Golden State’s play-by-play guy, yet I didn’t realize until much later that Love had passed to himself off of Greg Stiemsma’s back.  How I managed to miss that… I have no idea.