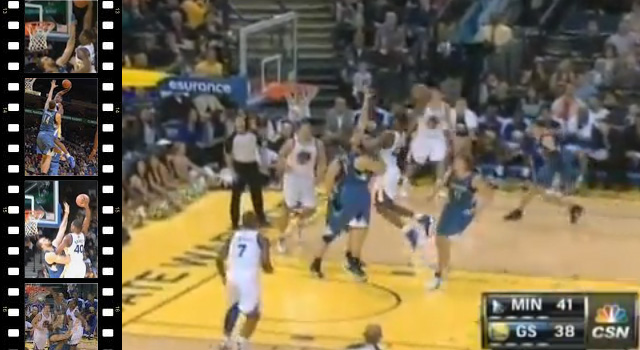 Ladies and gentlemen, we have a new Dunk of the Year.  In the second quarter of the final game on Saturday night’s schedule, a cutting Harrison Barnes received a bounce pass from David Lee.  The perfectly-timed dish put Barnes in position to score, but with the imposing, six-foot-eleven, 300-pound presence that is Nikola Pekovic looming between he and the goal, Harrison knew it would take the most powerful finish of his basketball career.  Without fear, he launched himself forward and upward.  As he extended his right arm behind his head, he firmly planted his left into the chest of Pekovic.  Contact had been made, and the airborne Barnes remained feet from the rim.  Remarkably, his momentum proved forceful enough to dislodge the hulking Pekovic.  Within arm’s length of the rim, Harrison dropped his hammer with the utmost velocity.  Over 3,000 miles away, I believe I felt my couch shake.

So does this mean Harrison gets to have a gnarly image of himself holding a severed warrior’s head tattooed on his shoulder?  That would be pretty awesome, and I think he’d be well within his rights to do so.

Throwback Poster of the Day: Two Defensive Players of the Year clash at the rim, but the offensive player prevails…