Nikola Pekovic And The End Of Moe Harkless 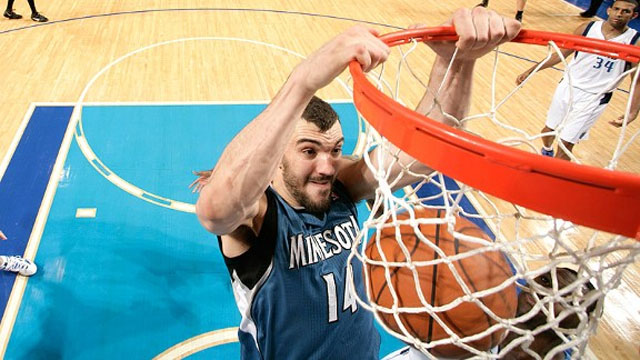 As awesome as Nikola Pekovic is (and make no mistake about it, he’s the best thing since sliced bread), it isn’t often that he makes his presence felt above the rim.  Pekovic’s colossal frame, which is rumored to be composed of mostly solid rock, doesn’t really lend itself to a high-flying style of play.  He does the vast majority of his damage directly underneath the basket — an area he’d never vacate if not for the three-second rule — where he uses his powerful build to carve out space.  He has little trouble creating a positional advantage in the post, and once he receives the ball Pekovic’s surprisingly-remarkable touch assures that a field goal is scored an impressive 55 percent of the time.  Essentially, this is the simple and repetitive manner in which Nikola Pekovic operates.  Unless he’s playing against the undersized, relatively-unathletic Orlando Magic, apparently.

As the T-Wolves clawed their way to a 15-point victory on Wednesday evening, Pekovic twice rose up for slam dunks, one of which came on top of a helpless E’Twaun Moore.  His elevated path of destruction would ultimately lead to the defensive end, where he did the following damage…

The play went down as a blocked shot, but all those who bore witness will remember it as the end of Moe Harkless, who joins the countless tortured souls represented by the skulls depicted in Pekovic’s tattoo.