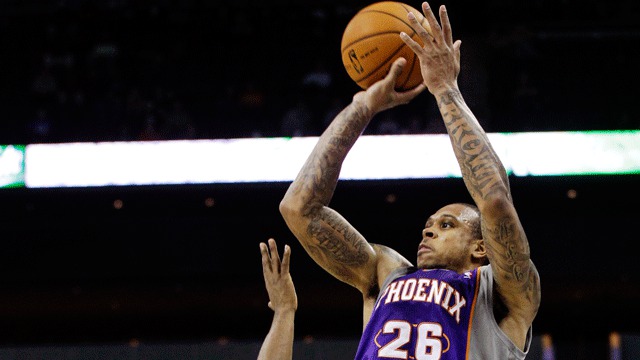 Shannon Brown’s name doesn’t ring bells like it did when he was running next to Kobe Bryant, back when his breakaway dunks made him something of a national sensation, at least until he left his faction sorely disappointed with an uninspired performance in the 2010 Slam Dunk Contest.  His recognition has never really recovered from the letdown, but that isn’t to say Shannon hasn’t been playing well.  It’s just that he’s two years removed from Los Angeles, where he left the spotlight behind.

Last season, his first with the Phoenix Suns, Shannon set new career highs in scoring (11 PPG) and three-point field goal percentage (36%).  His offensive contributions off the bench helped the Suns remain in the playoff hunt until the final days of the season, when he scored 61 points over the course of his last three games.  He exploded for a career-high 32 against the Spurs in late March and averaged close to 16 points per game through the end of April.

Now, Brown has embarked on what has been his best individual campaign to date.  After failing to reach double figures in an opening-night loss to Golden State, Brown took over down the stretch against Detroit.  To lead his Suns to their first win of the season, Brown scored 10 of his 14 points consecutively in the fourth quarter.  It was an impressive effort, but nothing that could even hold a candle to the unbelievable shooting exhibition he put on in Charlotte on Wednesday night.  Observe his barrage of three-point bombs…

As you can see, Brown was in the zone (had they not gone in, four of those were bad shots, no question).  It’s a good thing, too, because the Bobcats scored 29 in that fourth quarter.  Had it not been for Shannon’s perfect 6 for 6 shooting from distance the Suns almost certainly would’ve been flying back to the desert without a win to show for their three-game road swing.  Considering that they’d blown a 15-point lead to a Charlotte squad that is perceived as being absolutely futile, that would’ve been more than a little discouraging.

As for Shannon Brown, he’s just happy he finally shot the ball well against one of his former teams.  In three previous returns to The Queen City he’d scored just 11 total points in three losses.

It’s kind of funny to look back on the trade that sent Brown from Charlotte to LA; he’d played sparingly for three teams in three years, making him something of an afterthought in a deal that sent Adam Morrison, a lottery pick, to the Lakers in exchange for Vladamir Radmanovic.  Since then, Brown has emerged as a reliable source of offense.  He’s been by far the best of the three players involved in that trade, and it appears that his most outstanding days may be ahead of him.