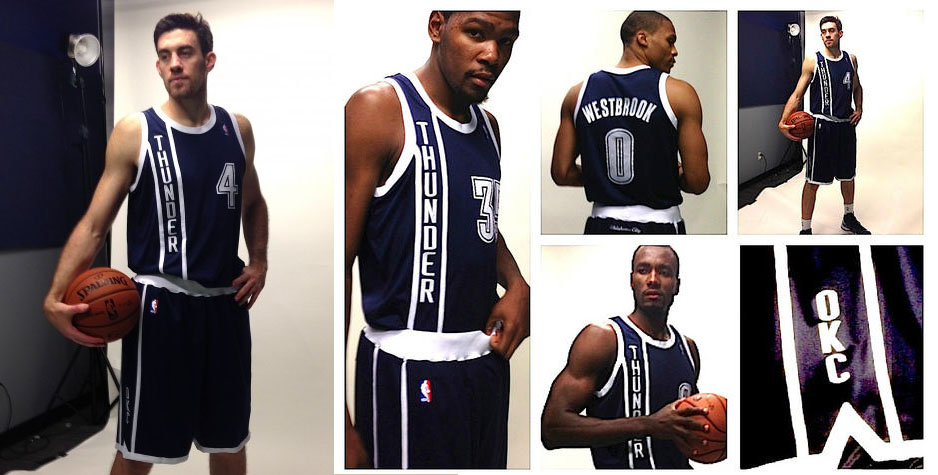 Pictured above are Nick Collison, Kevin Durant, Russell Westbrook, and Serge Ibaka.  What they’re wearing is Oklahoma City’s new, different, and completely unexciting navy blue alternate uniform.  The uniform looks like something an unartistic child would design with MS Paint, and will make its unfortunate debut on Friday night.

The Thunder are just the latest of many teams to reveal a new alternate uniform for the ’12/13 season.  The Nuggets recently took the floor in their brightly-colored throwback/Marquette hybrids (these I actually like), and the Spurs broke out their authentic practice jerseys for last Thursday’s home opener.  Also, the Blazers updated/downgraded their red alternates, and a variety of teams will wear their own version of the monochrome disaster that’s been dubbed the “winter court” style.

Clearly, revenues have moved ahead of… pretty much everything else on the NBA’s list of priorities.  I’m an advocate of “less is more,” but less being more is different from nothing being ugly.  This uniform features not a single interesting detail, and incorporates only two different colors.  That’s more lazy than it is clean.

Assuming Kevin Durant and company dislike their new outfits as much as I do, they can at least rest assured that no uniform could possibly make them look as awful as the Pistons probably will.  That’s OKC’s competition of Friday, and boy have they been bad.  Wow.