We’ve broken a lot of barriers in the United States of America, but one thing that still rarely happens is an interracial haircut.  Have you ever noticed that?  It’s like, for some reason, most people just don’t yet trust their hair to someone of another race.  I guess it kinda makes sense–we all have different hair–but is it really so bad that American ball players would prefer to go haircut-less during three-month stints in China than to see one of the local barbers?  I guess it must be that bad, because JR Smith allowed his hair to grow out like a Chia Pet during his CBA experiment (as did Wilson Chandler).  Upon touching down in the United States, this was one of JR’s very first Tweets:

And get his first cut he did.  I saw this tweet back on the 17th, but I thought nothing of it, anticipating something normal.  I should’ve known better.  Two days later, JR checked into his first game as a New York Knick, and my first thought was “what the f@ck did this dude do to his head?” 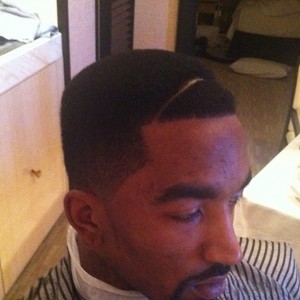 A horizontal part?  I’m not even going to pretend to have seen it all–I’m from Downeast Maine, for Christ’s sake–but do people actually do this?  Every part I’ve ever seen has been vertical… from the front of the head to the back of the head… maybe with a slight curve, but still essentially vertical.

So… why exactly did JR decide to take it a different direction?  Well, apparently, the style he was going for here is called the “Bishop,” which would be Tupac’s cut from the movie Juice.  Thing is, though, that I’ve got the screenshot of Tupac in Juice, and his hair doesn’t look a damn thing like JR Smith’s.

You know what this is?  A prime example of when a good idea goes wrong.  Like, remember when Tony Allen decided to shave a Grizzlies logo into the back of his head before a playoff game, but it came out lookin’ like a teddy bear?  Yeah… that’s basically what has happened here.  The “Bishop” is swag on a whole other level, and had the barber been able to nail it, JR would’ve received a 5/5 on the –Swag-O-Meter–, as OJ Mayo did with his new fade.  However, the execution was poor, and the only reason JR’s even getting a 1/5 is because he chose to wear Latrell Sprewell’s #8.

Maybe JR should’ve given the Chinese barber a try!