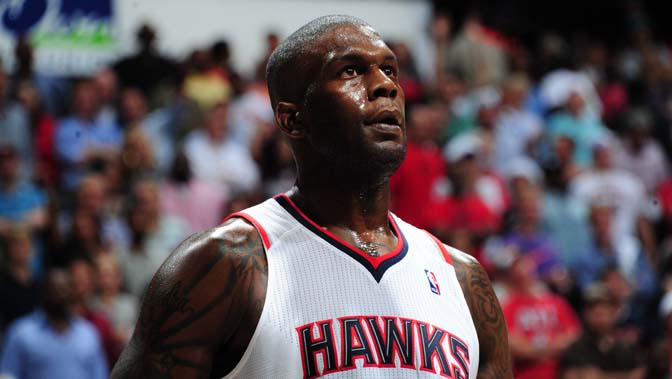 The following is essentially an outline of one of my typical recap posts.  I’m giving you this today because I’m trying to save some time in order to make other posts.  Executing the cutesy transitions and organization of a “Starting Lineup” forces me to think, and me thinking tends to take forever.  So, In bold/italics you will find my actual, complete game notes from Wednesday night, and in regular font some brief descriptions of these notes, because most of them would make little sense otherwise.

-DeShawn Stevenson/Ivan Johnson start same NBA game. This one is pretty much self-explanatory — Ivan Johnson got his first career start alongside DeShawn Stevenson, which is obviously right up my alley/the most beard-y thing to happen since James Harden.  This only occurred due to injuries to Al Horford and Zaza Pachulia, obviously, and it was also against the Bobcats… but Johnson’s 12 points and 15 boards still stand out on the stat sheet.

-Amir Johnson. Had some decent dunks and scored 12 of his 15 in the first half.

-LeBron kills Raps first Q. Trend. 5 games 10+. Step through dunk thing. The Heat actually lost the first quarter to the Raptors by a score of 28-22, but it was no fault of LeBron’s — the King had already racked up 10 points, something he’s done in five consecutive first quarters now.  As for the “step through dunk thing,” that was this.  Slicing through three defenders simply isn’t supposed to look that incredibly effortless.  LeBron finished with 31/10/11, his 34th career triple-double.

-BJ’s suit (halftime). Byron Mullens, who is out with an ankle injury, had a pretty awesome suit on.  Can’t find a picture of it, though.

-Lakers get calls early — Gasol, Z-Bo out w/ 2, in penalty — still tied 11-11. Personal fouls were 6-1 in favor of the Lakers eight minutes into the game.  Marc Gasol and Zach Randolph had been forced to sit down, the Grizzlies were in the penalty, and yet the Lakers still couldn’t build a lead.  Memphis ended up winning the first quarter 24-23 despite making one shot in the first 4:34.

-Wroten/Bayless situation. Wroten layup. Extremely agressive. deflected a lot. The Grizzlies’ trade of Wayne Ellington and Marreese Speights has forced Lionel Hollins to move Jerryd Bayless from backup one to backup two.  When rookie point guard Tony Wroten entered the game in the first quarter with 35 total minutes of NBA experience under his belt, I wondered if the Grizzlies would be in trouble.  Before I could even finish that thought, Wroten was driving to the basket for a nifty layup.  By the end of the second quarter he already had a career-high nine points, one monster dunk, and a +/- of +9.  He didn’t score in the second half, but he stayed aggressive (13 shots).  A lot of his driving layup attempts got deflected, but the point is that he impacted a game that the Grizzlies won by 13 yet only led by one when he checked in.

-Darell Arthur. Guy was a BEAST off the bench for the Grizzlies, scoring 20 points and grabbing 9 boards in 28 minutes.  He also played some small forward and shot a three-pointer, which is different.

-CJ, Jellyball help Wolves come back in 2nd. The T-Wolves 10-day contract signees, Chris Johnson and Mickael Gelabale, helped them make another mini comeback by scoring 10 points in the second quarter.  The Nets did go on to beat them easily, however.

-Other Chris Johnson checks in, takes fast shot. There are currently two Chris Johnsons signed to 10-day contracts in the NBA.  The one you haven’t heard of is a swingman for the Grizzlies.  He launched his first shot, a corner three that was way off the mark, just 28 seconds into his NBA debut.  Kobe was impressed.

-Bulls down 68-57 start of 3rd. Nate Rob 9-0, gets stuffed after heat check, falling OOB, somehow finds Noah for dunk. Pistons actually take lead back, but JIMMY BUCKETS. Was Noah’s foot or the ball OOB? Stacey King likes his meatballs spicy. So, um, yeah… basically, the Bulls were having their asses handed to the by the Pistons until Nate Robinson went off for nine unanswered points at the start of the fourth quarter.  Robinson actually made his first heat check, but then got stuffed, ending his run.  However, he got the ball back, darted around like a maniac, almost fell out of bounds, and somehow threw this ridiculous pass that found its way to Joakim Noah for an easy dunk.  The Bulls ended up taking a six-point lead, blowing that six-point lead, and taking the lead back once again on a Jimmy Butler jump shot.  Then, finally, this happened:

For the record, I’ve examined this closely both on TV and Youtube and I don’t think Noah’s foot had touched the floor when he saved the ball.  I don’t think the ball bounced on the baseline, either.  Great play.  And Stacey King likes his meatballs spicy.  Just so you know.

-Tinsley move/Rubio Pass. A couple of tricksters, these two.  You too, JaVale McGee.

-Scott Brooks moron. Not Perkins’ fault he was in the game. Thunder 0-1 when Perk outscores Westy. Something went wrong with a crucial offensive play in which Scott Brooks elected to make Kendrick Perkins the shooter?  You don’t say…

A lot of folks have been critical of Perkins for not rolling to the rim harder.  What I’m saying is that you can’t expect Kendrick Perkins to not fuck up in this situation, and therefore he should not be anywhere near the court.  This one’s on you, Scotty.  Oh, and the Thunder are now 0-1 when Perkins (12 points) outscores Russell Westbrook (10 points).

-T-Rob good night, Kings bad night (Beas/Suns/Attendance). Thomas Robinson took advantage of an opportunity to play extended minutes and posted a career line of 12 points and 14 boards.  The Kings suffered a depressing home defeat to the Suns, though, as Michael Beasley lit them up for 19 points in front of only 12,700 people.  I totally understand not wanting to give money to the Maloofs to watch Mike Beasley torch your team, but Kings fans may want to consider actually showing up at games if they want NBA basketball to take place in Sacramento.

One Response to Wednesday Night Game Notes, Quite Literally