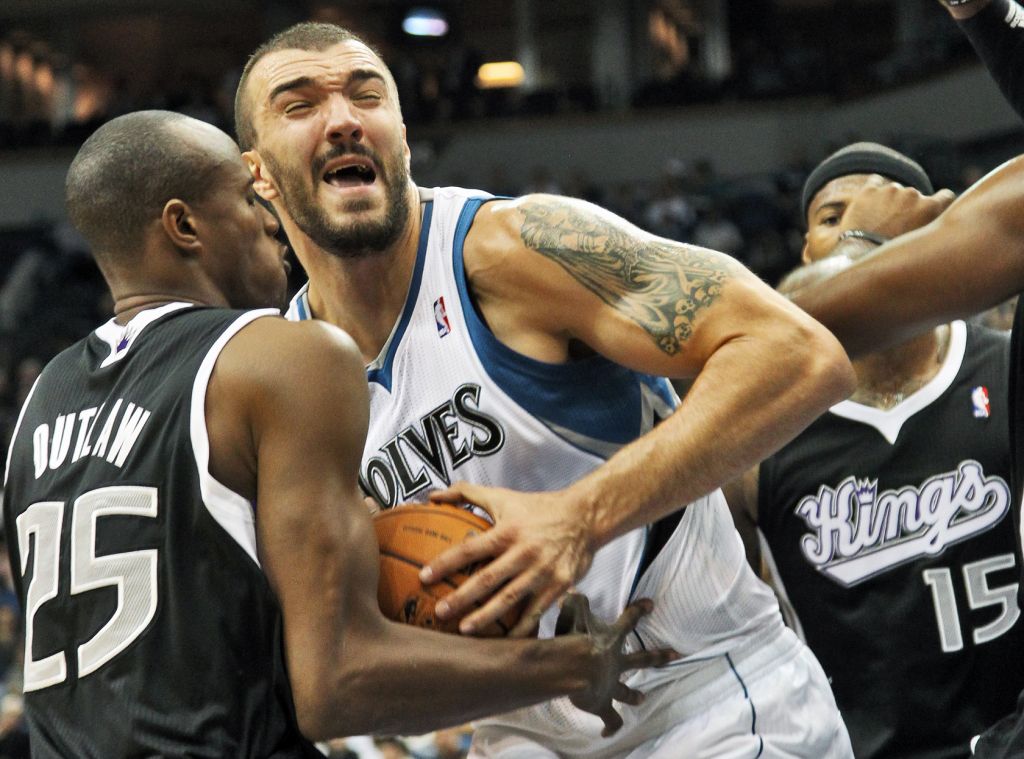 Lakers center Dwight Howard and assistant coach Darvin Ham are men of imposing physical stature to say the least.  Howard, nicknamed “Superman,” stands a reported 6’11” (though he appears to be an inch or two shorter) and weights in at just under 270 pounds.  Ham, best known during his playing career for obliterating backboards, was listed at 6’7”, 240 — modest numbers in comparison to many NBA big men, but he was built like a tank and played like a bruiser.  So, being that Howard and Ham are mammoths of men themselves, one would figure that they aren’t easily impressed by the size or strength of another.  After all, they’re bigger, stronger, and more athletic than 99.9% of the human beings that walk this earth.  Who could possibly be big and brolic enough to physically wow these two giants?

Nikola Pekovic, of course.  Via the Los Angeles Times…

Some NBA players try to limit their time talking to the media. Lakers center Dwight Howard is not one of those players.

His pregame and practice chats can be informal rap sessions on a wide range of topics. On Tuesday, Howard declared which NBA player should join the MMA (Mixed Martial Arts).

“There’s one guy in the NBA right now who could be probably the best MMA fighter in the world . . . [Nikola] Pekovic from Minnesota,” Howard said. “I swear. I swear he looks like he could be a great MMA fighter.”

The Timberwolves and Pekovic won’t visit Staples Center until Feb. 28, but the Lakers will meet Minnesota for the first time this season on Feb. 1 on the road.

Naturally, us physically-average fans have long been enamored by Pekovic’s remarkable size, brutish image, and punishing playing style.  I may speak for myself when I admit that one of my favorite pastimes is looking up fanciful adjectives to describe Nikola Pekovic, but I know I’m not the only one who gets a great deal of amusement out of exaggerating his legend into that of a superhuman figure.  As I said, though, you and I… we are merely fans.  To hear a couple of guys like Dwight Howard and Darvin Ham — peers of Nikola Pekovic — talk about him in such a fascinated light… it speaks volumes about how imposing he truly is.

For the record, Nikola Pekovic did dabble in Mixed Martial Arts.  He never got to fight, though, because each and every one of his opponents fled the octagon the moment they laid eyes on the Montenegrin manbeast.