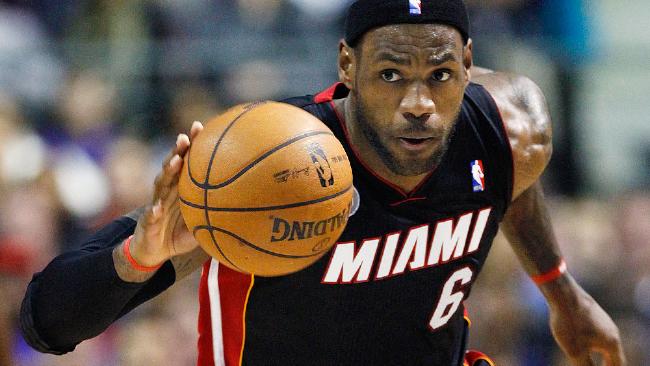 Only 13 players in NBA history have achieved 20,000 points and 5,000 assists.  Last night, LeBron reached both milestones in the same game.  Not bad for a 28-year-old (James is the youngest ever to reach 20,000, but certainly not the fastest; that was Wilt Chamberlain).  Around the five-minute mark of the second quarter, Draymond Green was given the unenviable task of trying to prevent LeBron from scoring the big bucket.  He was just five points away, but Draymond appeared to embrace the tall order.  As Shane Battier approached Draymond to set a ball screen, LeBron waved him away and prepared to take the rookie one-on-one.  Moments earlier, Green had bumped James on the perimeter, apparently angering him.  It was at that point that the King took over, dropping unassisted jumpers on three of six Miami possessions and scoring his 20,000th point in the process.  Mad ’cause the MVP was stylin’ on him, Green picked up a technical foul.

Green’s Warriors proceeded to have their asses handed to them, trailing by as many as 34 before losing 92-75.  LeBron finished with 25/7/10.

Quietly, the Bulls are sneaking up on the Pacers in the Central Division.  With Chicago’s 107-105 win in Toronto and Indiana’s 97-86 loss in Orlando, the Pacers’ edge is now just a half game.  Indiana has to be disappointed in their most recent effort… they pride themselves on their defense, but they gave up 97 points to a sub-.500 team that only averages 95.  Chicago, on the other hand, had an excellent showing last night.  Though the strong play of Kyle Lowry (26 points) and Alan Anderson (27 points) kept the game close and ultimately forced overtime, the Bulls’ exquisite ball movement (26 assists) and dominance in the paint (54-36) set the table for Luol Deng to bring it home.  The Bulls are now 6-2 in January, and Carlos Boozer deserves a lot of credit.  Boozer, who destroyed the undersized Raptors to the tune of 36 points and 12 rebounds, has recorded seven double-doubles in eight games since the start of the new year (take note — the man is averaging 24 points and 11 rebounds on 55% from the floor in January).  Props to Joakim Noah as well; he’s been nice all season long, and the way he passes the ball (4.1 APG leads all PF/Cs) is the primary reason why the Bulls lead the NBA in assists per made field goal.

Getting back to the Pacers for a moment…

Let me just say that I’m sorely disappointed in Roy Hibbert.  He of seven feet two inches got completely dominated by the smaller Nikola Vucevic (16/15) and allowed Big Baby to shake his fat ass right in his face.  I don’t typically condone violence, but you’ve got to slap the shit out of that man for thinking he can bring some fruity nonsense like that into your painted area.  That’s just unacceptable.

Austin Rivers managed to put nearly 23 minutes of solid basketball together as his Hornets defeated his father’s Celtics in Boston.  Playing without Eric Gordon, who continues to sit out the second game of back-to-backs, the Hornets snapped the Celtics’ six-game win streak in decisive 90-78 fashion.  Austin came off the bench to score eight points on 3-6, which is a notable performance considering both the circumstances (in addition to his dad’s presence, there was Avery Bradley) and the way he’s struggled all season long (at 33.2%, Rivers is one of the league’s worst shooters amongst all regular rotation players).  The Hornets also got boosts from various other role players, including Al-Farouq Aminu (18 points) and Robin Lopez (17 points), in their sixth win in seven games.

Washington’s three-game win streak has come to a heartbreaking end.  In short, John Wall bricked two free throws that probably would’ve won the game.  He actually made a great defensive play to earn himself the free throws, stripping DeMarcus Cousins and pushing the ball in transition.  Amidst a Wizards chokejob that saw them miss five of their last six shots, Wall toed the stripe with 30 seconds to go, presumably to give the Wiz the lead.  However, the score would remain tied at 94 as each of his attempts rolled off the rim.  Tyreke Evans proceeded to drive to the basket, get tripped by Nene, and score the deciding point at the opposite free throw line.  Kings win 95-94.

There was a moral victory, though! Bradley Beal dropped a career-high 26 points:

So don’t fret, Wizards fans.  Moral victories are more important right now anyway, and your youngin’ is looking awfully nice in the month of January (18.8 PPG on 46% FG).

The Mavs, winners of their last four, and Rockets are currently headed in opposite directions.  In Dallas, Houston lost their fifth in a row as James Harden had one of his worst nights of the season.  Harden did score 20 points for the 22nd straight game, but it took him 23 shots to do so and his go-ahead layup attempt was rejected by the timely Elton Brand…

Remember, kids, there was a time when Brand blocked over two shots per game for six straight seasons.  Though he’s never been the same since his severe achilles injury, he still swats his two per game on a per-36-minute basis.  This particular rejection is simply an example of heady help defense from the 14-year veteran.  When Omer Asik tried to create space for Harden by vacating the paint, Brand realized there was no reason to follow him and essentially zoned up.  Had he not been there Harden likely would’ve dunked the basketball; as you can see, Mike James had been burned.  Brand finished the game with 11 points, 10 boards, and 2 blocks, good enough for the 400th double-double of his career.

Young Damn Lillard experienced the misfortune of encountering a rabid Kyrie Irving in Portland’s 93-88 loss to Cleveland.  Irving, who was noticeably determined to snap the Cavaliers’ three-game losing streak, dropped 10 of his game-high 31 in the fourth quarter, and he did so in typical Kyrie Irving fashion.  Observe:

For the record, I think he double-dribbled before that last jumper… but damn.  Just… damn!  From the killer crossover to Kobe’s reverse pivot, this kid literally has every move in the book.  Lillard, on the other hand, has much to learn yet; though he hit a big shot to give Portland a one-point lead with two minutes to go, he struggled mightily (3-9, 13 points) in trying to hang with Irving.

The Blazers will have two much-needed days off before they face the Bucks on Saturday, when they’ll aim to snap a four-game losing streak.  I suppose it should come as no surprise that Portland sputtered through a stretch of four games in six nights; their biggest deficiency is their lack of depth, and the way they’ve been falling behind early in games is certainly an indication of sluggishness.  That’s not to mention that the competition was stiff.  Having played Golden State, Oklahoma City, and Denver over the past week, the Blazers will look forward to seeing the Bucks and Wizards.  We’ll see if they can recapture the magic this weekend.

Box Score Observations: Jeff Teague went off for 28 points and 11 assists to pace the Smoove-less Hawks as they ripped the Nets 109-95.  Discouraging loss for Brooklyn, who’d won 9 of their last 10.  Russell Westbrook, Kevin Durant, and Kevin Martin came together like Voltron, scoring 72 points on 44 shots as the Thunder beat the Nuggets by 20.  Serg Abaka was ’bout dat life with five blocks in his return from injury.  Timmy Duncan had five rejections of his own (averaging 3.9 in January) in a 103-82 victory over the slumping Grizzlies.

Highlight Recap: I want to get this thing posted, so here’s the top 10…

One Response to The Starting Lineup: LeBron Passes Various Milestones