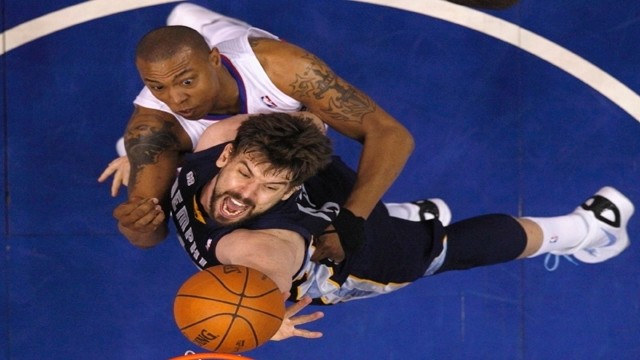 Monday, January 14th: Clippers @ Grizzlies, 8:00 ET, NBALP: The Grizzlies are still yet to avenge last season’s devastating, come-from-ahead playoff disaster, and with every mounting loss to the Clippers they become more and more ravenous.  The Clippers get a kick out of the Grizzlies’ frustration, of course, and very much enjoy maintaining the bragging rights in this budding rivalry.  Needless to say, neither side is overly fond of the other, making each and every one of their matchups worth watching.

Tuesday, January 15th: Bucks @ Lakers, 10:30 ET, NBALP: The Lakers finally became the last team to win a game in the calendar year of 2013 as they got Dwight Howard back and crushed the Cavs on Sunday, but I think they’ll find the Bucks to be a much more challenging Central Division foe.  With the way Steve Nash and Kobe Bryant struggle to defend speedy perimeter players like Brandon Jennings and Monta Ellis, Dwight Howard will likely be in for a long night.  Speaking of Dwight, it’ll be interesting to see how well the energetic Larry Sanders is able to handle him at the other end.

Wednesday, January 16th: Heat @ Warriors, 10:30 ET, ESPN: Expect the Oracle Arena atmosphere to be especially electric as LeBron James and the Miami Heat roll into town for the first and only time this season.  As is not the case at many of the league’s lesser venues, I do not expect the crowd to be divided in its rooting interests.  As long as this game is reasonably competitive — and there’s no reason it shouldn’t be — then it’ll be a blast.

Thursday, January 17th: Clippers @ Timberwolves, 8:00 ET, TNT: Is there anyone out there who doesn’t enjoy watching the Clippers?  How about the Timberwolves?  Exactly.

Friday, January 18th: Rockets @ Pacers, 7:00 ET, NBALP: Offense clashes with defense as the NBA’s highest-scoring squad travels to the Midwest to meet the league’s stingiest defense.  The tempo of this particular game is likely to be especially important as the Rockets will look to speed it up and the Pacers will aim to slow it down.  So, as you focus on James Harden and Paul George, be sure to recognize that one of the game’s most important battles will be fought by Jeremy Lin and George Hill.

Saturday, January 19th: Warriors @ Hornets, 8:00 ET, NBALP: The Hornets’ four-game win streak has come to an end, but — wait, what?  That’s correct: the Hornets recently strung together four consecutive Ws, and they did so despite facing some stiff competition in the Spurs and the Rockets.  Now 5-3 since Eric Gordon returned, New Orleans is a threat to give even a playoff contender like Golden State a run for their money.  Greivis Vasquez is playing some fantastic ball in 2013, averaging nearly 17 and 11 over 7 games.

Sunday, January 20th: Thunder @ Nuggets, 8:00 ET, NBALP: As I write this, the Thunder are currently tied with the Bulls for fewest road losses (5).  The Nuggets, coincidentally, are tied with the Spurs for fewest home losses (2).  Something’s got to give, but all indications suggest that nothing will give very easily.