Play of the Night: The Trailblazers’ Tying Basket

The Blazers found themselves with the ball, down three with a minute remaining.  It was a prime-time national TV game that was coming down to the wire.  Normally in this situation you might see just a pick and roll or isolation.  Instead, Terry Stotts drew up a perfect play that would either bring the Blazers within one or tie the game up.  Here is how it went down:

Things start out with what looks to be Wesley Mathews coming up to set a pick for Damian Lillard. 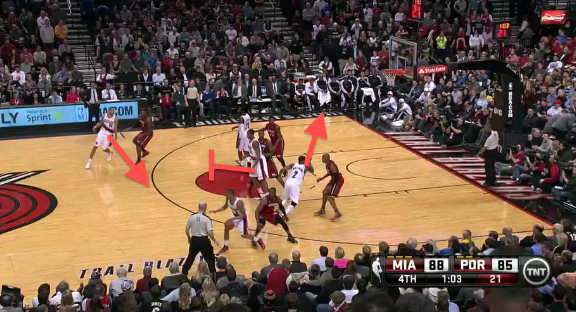 Instead of coming to set the pick, however, Mathews abruptly turns and starts to cut through the lane.  As this is happening, Nicolas Batum begins swooping towards a screen set by LaMarcus Aldridge.

Batum curls around the Aldridge screen and gets into the lane with nobody in front of him as Lillard skips him a bounce pass.  Now this play becomes a read and react off of Ray Allen.  Allen can either help out to make sure Batum doesn’t have a wide open dunk or stay with Mathews as he cuts toward the corner.  Also, notice how far away from the basket JJ Hickson is so that his man can’t help. 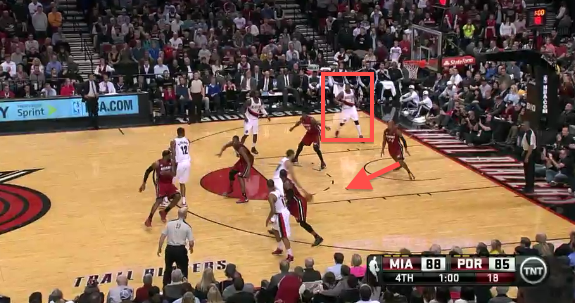 Allen stays in the lane to stop Batum’s penetration.  Of course, Batum then passes to Wesley Mathews for a wide open corner three.  Suddenly it’s tie game on a beautifully executed play.

One Response to Play of the Night: The Trailblazers’ Tying Basket