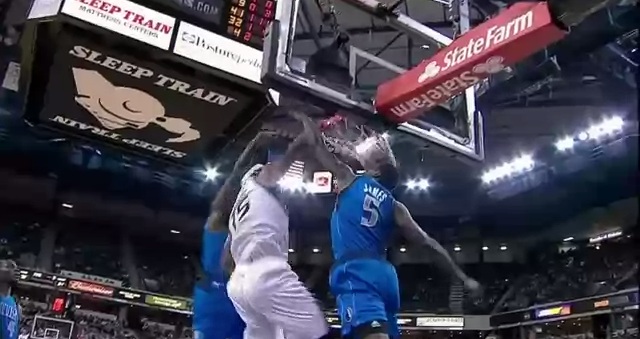 Today happens to be one of those days where I wish I could choose two winners, as both JR Smith and DeMarcus Cousins are entirely deserving of this particular POTD.  Each player threw down one of two remarkable slam dunks that, although very different, are almost equally impressive.  Smith took flight from the fringe of the painted area and, having launched off of his right foot, soared to the rack for a furious right-handed throwdown over seven-foot-forever Ian Mahinmi.  Cousins, on the other hand, elected to go through the defender, Bernard James.  Utilizing a powerful left shoulder, DeMarcus blasted James backwards with a Shaquille O’Neal bulldozer move and plowed his way to the iron for a right-handed smash.

I’m beyond torn.  Smith’s dunk is a thing of beauty, especially in slow motion.  Cousins’ dunk, on the other hand, is less beautiful than it is disgusting — in a good way.  JR’s dunk makes you say WOW!, and DeMarcus’s makes you say SHIT! Which am I supposed to choose, WOW! or SHIT!?

And that, my friends, is how I finally came to my conclusion.

This is, after all, the Poster of the Day, where things are judged on a nastiness scale depicting the face of a man who had almost certainly just exclaimed, “SHIT!”

Despite the sheer amazingness of what JR pulled off, I had no choice but to roll with DeMarcus.  His dunk was precisely the sort of insulting, degrading, humiliating, nasty power jam that the POTD is all about.

Throwback Poster of the Day: Oh how I miss the old Amare…