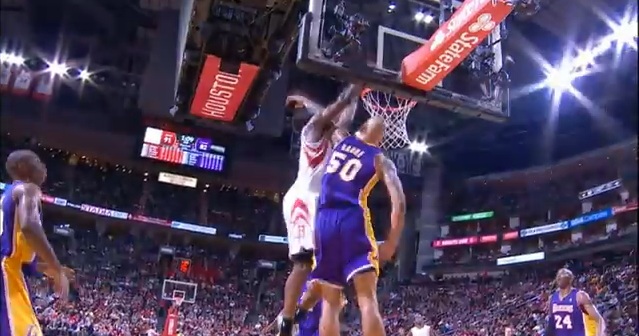 I was sincerely pulling for Robert Sacre to have a good game in his first start in place of the injured Dwight Howard… mostly because I wanted the Lakers to win, because that just would’ve been funny.  Unfortunately, that’s not what happened.  Sacre did score 10 points, but, as the Lakers got blown out 125-112, he grabbed just three rebounds in 27 minutes and played Washington General to James Harden’s Harlem Globetrotter.  Harden, who hung 31 on the Lakers, made a third-quarter statement by going up high and mashing in the seven-foot Sacre’s mug…

…then put the cherry on top of Houston’s big victory by going down low and dishing the rock right through Robert’s wickets.  A guy steps in fresh out of the D-League and you’re just gonna do him like that, James?  Cold.  Real cold.

What’s the deal with that celebration, though?  Excuse the potty talk, but it looked to me like Harden was taking a pretend dump on the floor.  Was he suggesting that he’d just taken a dump on Robert Sacre?  If so… I’m not sure how I feel about that.

Throwback Poster of the Day: Shandon Anderson on Gerald Wallace…

One Response to POTD 1/8/13: James Harden on Robert Sacre