Could Jason Kidd & Kenyon Martin Be Reunited In New York? 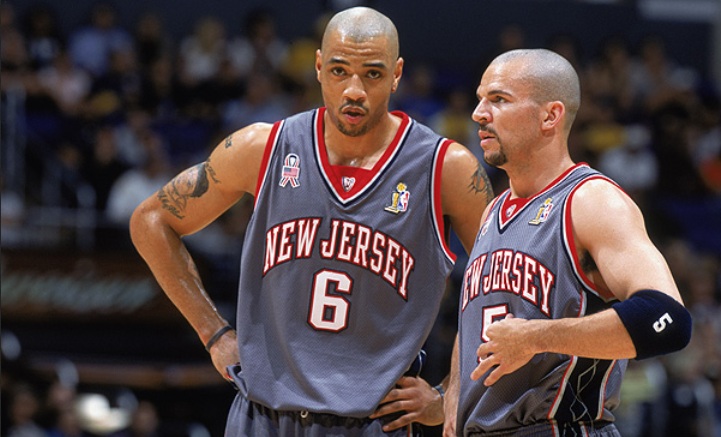 Kenyon Martin has been one of my favorite basketball players for a long, long time.  So, when I read a Yahoo Sports report stating that the New York Knicks are considering adding a second highly-charismatic forward in K-Mart to go along with ‘Sheed Wallace, I was excited for two reasons: firstly, Martin was still an explosive, athletic dunker with the Clippers last year, and I find it sad that some of the last leaps his knees will provide are being wasted as we speak.  I simply want to see the man back on an NBA court.  Secondly, the Knicks happen to be the employer of one Jason Kidd, Martin’s old running mate from their days with the Nets.  While the duo is obviously much older now (74 years of age between them) than it was when they were alley-ooping their way to multiple Finals appearances, its reassembly is still something I absolutely salivate over even the thought of.

From the aforementioned Yahoo report:

Martin has been open-minded about the possibility of accepting a 10-day contract to get the opportunity to prove his value to the Knicks, sources said.

Wallace has missed 12 straight games with what the Knicks call a “stress reaction” in his left foot. The uncertainty surrounding Wallace’s return has made the Knicks circle back on the possibility of signing Martin, sources said.

Wallace’s status is the “critical piece” to the Knicks signing Martin, one league official said.

Martin, 35, played the most reduced role of his career with the Los Angeles Clippers in his 12th season in 2011-12. The Knicks’ roster includes four former teammates of Martin that he’s has good relationships with: Carmelo Anthony, J.R. Smith, Marcus Camby and Jason Kidd.

Um… YES PLEASE! Based on Martin’s performance with the Clippers, I expect that you’d be surprised by how much of ^that these two would still be capable of pulling off.  As I said, Martin was still elevating like an elite leaper just a year ago, and no amount of physical deterioration is going to rob Kidd of his court vision.

Just don’t cut James White — we need him for the dunk contest.