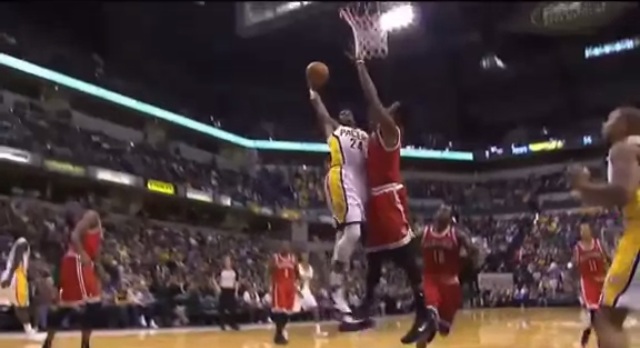 December 2012 was a month that Paul George probably wished would never end.  In 15 games George averaged a shade under 19 points per game on about 46% from the floor, and he also saw increases in his rebounds, assists, steals, and blocks.  It was was the best stretch of his career to date; he literally did everything at a high level, helping his Indiana Pacers to go 10-5.  As the calendar flips to 2013, PG looks to maintain his momentum by continuing to be aggressive.  His free throw attempts in December were nearly twice what they were in November, and if he keeps attacking like this he’ll be earning even more in January…

In the race for the shot blocking crown, Larry Sanders and Serge Ibaka have been running neck and neck all season long.  Sanders has a slight edge for the time being, yet this will be his first appearance on the posterized list.  Big ups to Paul George for breaking the ice.

Throwback Poster of the Day: Emeka Okafor crushes one in the face of DJ Mbenga…

One Response to POTD 1/5/13: Paul George on Larry Sanders