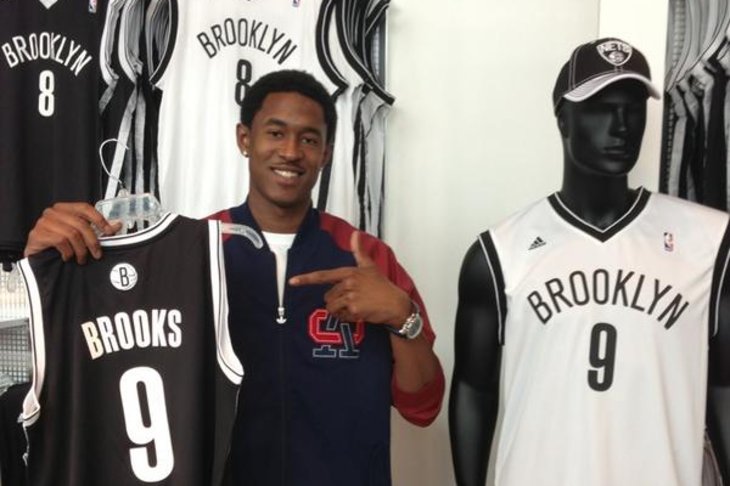 As the Nets destroyed the Kings on Saturday, Marshon Brooks got his first opportunity to play 20+ minutes in nearly a month.  Brooks, who displayed an impressive offensive arsenal as a rookie, has fallen out of favor in his second season due to a supposed lack of concern with the defensive end of the floor.  Some speculated that Brooks would get a second chance under new head coach PJ Carlesimo, but that hasn’t been the case thus far.  With the exception of blowouts, Brooks has essentially remained on the shelf.

And that brings us back to Saturday.  As I said, the Nets made easy work of the Kings, pulling out to a lead that nearly reached 20 points in the middle of the second quarter.  Brooks had already heard his name called by that point, and upon checking in he immediately got to doing what he does.

MarShon put his first shot up within 18 seconds of entering the game.  He’d taken five more by halftime.  Of the six shots, he made all but one.  According to the play-by-play, his lone miss came on a “nine-foot two-point shot” that was blocked by James Johnson.  A “nine-foot two-point shot” could be a lot of things, but whatever it was, I highly doubt it was as excessively-difficult as the 20-foot attempt that Brooks fired a little later on…

Video via The Brooklyn Game.

Now, I realize that this shot was going to be difficult no matter what Brooks did; he was put in a compromising position upon receiving the ball a yard beyond the three-point line with 4.9 seconds on the shot clock.  However, why not just take one leisurely dribble into a pull-up three?  While that too wouldn’t have been a high-percentage look, at least it’s potentially worth an extra point.  Certainly that would’ve made more sense than what MarShon did, which made no sense at all.  He literally made four pointless dribble moves in as many seconds, each of which made the shot worse.  Why on earth would any logical basketball player do something like that?