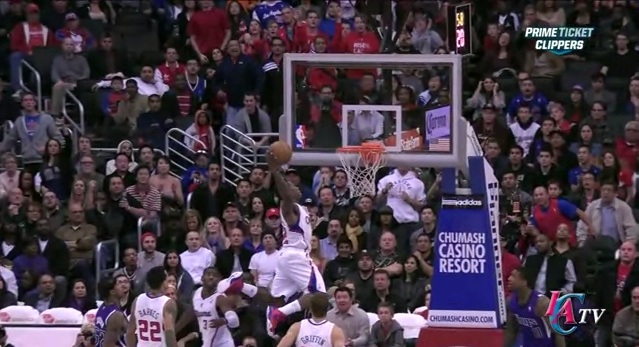 Pound for pound, Eric Bledsoe might be the finest athlete in all the NBA.  At six-foot-one, 195, the man known as Mini LeBron has a playing style more stereotypical of someone seven or eight inches taller than himself (hence the nickname).  Amongst the league’s entire crop of guards — ones, twos, starters, non-starters… everybody — Bledsoe is second only to 6’10″ Paul George in blocks per game.  George, who paces all guards with an average of .89 rejections per game, leads Bledsoe by just eight hundredths of a block despite being a tall, long, slam dunk contestant who plays nearly 36 minutes per game.  As for Bledsoe, he sees about half that much time with an average outing that lasts just over 18 minutes.  On a per-minute basis, Bledsoe obviously destroys the competition when it comes to shot blocking.  Take a look at this swat he had against Thomas Robinson on Friday…

Comparing a play by a dude seven feet tall to a play by a dude six feet tall is a bit of an apples to oranges situation, but the block of the year currently belongs to either Eric Bledsoe or JaVale McGee.  I could make a solid case for either player, but I’d rather just call it a tie.  This was just one of Bledsoe’s three blocks in the game, by the way.  If I’m not mistaken, they all happened in a span of 10 minutes or so.

Oh, and when it comes to slam dunking, Eric Bledsoe destroys the competition there, too.  Watch this:

Pretty nasty, but maybe you were expecting more.  I mean, sure… that was very, very impressive for a man of Bledsoe’s stature, but I just claimed that he “destroys the competition.”  Even taking his height into consideration, a standard fast-break jam doesn’t make a short dude a better dunker than, say, Russell Westbrook.  Here’s the thing, though… what you just saw was Bledsoe’s second-best dunk.  Not of the year, or of his career… but of Friday night’s game.

In order to illustrate just how ridiculously-monumental the play you’ve just seen truly is, allow me to break it down like this:

As I said before, Dwight’s lob against the Celtics was not only deemed alley-oop of the year by NBA.com, but is generally regarded as one of the greatest alley-oop slams EVER.  Seeing as Eric Bledsoe, a point guard, essentially duplicated it… wouldn’t that make his lob against the Kings one of the best of all-time, too?

Aside from Vince Carter’s one-hander against the Clippers, Gerald Green’s windmill against the Nets, Stromile Swift’s “Inspector Gadget” dunk against the Nets, and LeBron’s hurdle over John Lucas III… I’m failing to come up with any alley-oop that I would say is definitively better than Eric Bledsoe’s.  I’d bring some others into the debate — Gerald Green’s off-glass slam against Toronto, for example — but, like I said, I can’t think of another specific lob that indisputably tops this one.

Incredible freaking jam by Eric Bledsoe.  I nearly soiled myself when I saw it on TV (thankfully, live).  Gerald Green threw down his own dunk of the year candidate on Friday, and Bledsoe’s slam probably tops it (though it’s hard to say for sure; I hate comparing different types of dunks).

Note: I think this goes without saying, but I hadn’t yet mentioned that the Clippers beat the Kings; 97-85 was the final score, but it was total massacre.  The Clipps would’ve won by 100 if they weren’t trying to one-up themselves on each and every possession.

DeMarcus Cousins was so demoralized he didn’t even come out of the locker room for the second half.  No, seriously, he really didn’t.