Andrew Bynum Update: Cleared For Increase In Activity, Has Yet Another New Hairdo 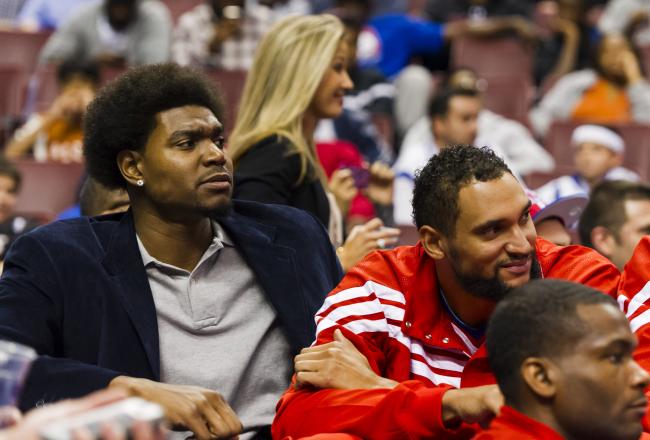 Andrew Bynum’s return to the court has been pushed back more times than Dr. Dre’s Detox album.  The saga began back in October, when Bynum was diagnosed with a simple bone bruise in his left knee.  The injury wasn’t supposed to be serious, and it was reported that he was being held out of preseason games on an indefinite, precautionary basis.  As the regular season crept closer and closer, however, the news gradually became less and less promising.  Bynum was not made available for Philadelphia’s season opener, nor was he back by Thanksgiving, as he said he hoped to be.  The most disappointing setback occurred in mid-November, when the fragile big man somehow managed to get injured while bowling.  To make matters worse, it became known that he was actually having problems with both knees.  It was at that point that many started to wonder if Bynum would ever return this season, and as of now, there is still no timetable.

Earlier today, Sixers GM Tony DiLeo spoke on Bynum’s situation.  For the first time in a long time, the news wasn’t all bad.  According to CSNPhilly.com, Bynum has finally been cleared to “increase his activity level.”

Sixers GM Tony DiLeo announced Friday night that Andrew Bynum remains out indefinitely, but did say he has been cleared for an increase in his activity level.

DiLeo referred to a “six-step” rehabilitation process for Bynum, who will now begin low-impact activities like riding a bike.

“His knees are healing. He is improving,” DiLeo said. “He has been approved to increase his activity level. Still there is no timetable. A lot depends on how Andrew reacts and his body reacts to the increased activity.”

While it’s a little unsettling that Bynum is just now beginning to take baby steps towards his eventual return, at least he’s taking them.  Apparently, to this point, he’s been able to do little more than walk.  If he responds well to a little cycling in late December, one would think he could be playing basketball come the springtime.

Also, Tony DiLeo wasn’t the only one who addressed the media today.  Andrew Bynum himself spoke with reporters, and in doing so debuted his latest hairdo — braids.  Having sported many different versions of a large afro for the duration of the season, this latest development comes as a bit of a surprise, and kind of makes him look like Sixers legend Allen Iverson.

Interesting choice, Drew.  In modern fashion and pop culture, Braids have essentially been replaced by dreads, and this is an unusual style.  That being said, I can respect a man who goes against the grain.  I think we can all agree that this look is a relative success in comparison to a few of his other ones, such as that baffling bowl cut or the “Frederick Douglass.”

Pretty sure this is the first time I’ve ever had to use the –Swag-O-Meter– to rate multiple haircuts in a 12-hour time frame.  What an amazing day!

One Response to Andrew Bynum Update: Cleared For Increase In Activity, Has Yet Another New Hairdo