Posted on February 2, 2013 by Stephen Coston 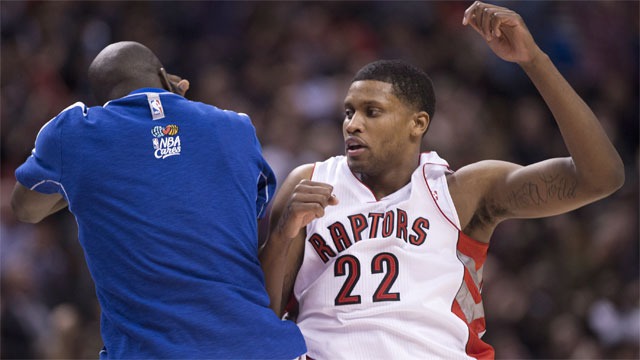 On Friday morning, Rudy Gay was still in Memphis. Physically, I mean.  Though he’s been a Toronto Raptor since Wednesday, Gay didn’t actually arrive in Canada until this afternoon, when he passed his physical examination and a crash course in Dwayne Casey’s playbook.  Hours later, he was showered with cheers from his new faithful when he got up off the bench to replace Landry Fields six minutes and 51 seconds into the first quarter.  Fittingly, the hectic pace of Gay’s frenetic day carried over into Toronto’s blowout victory over the Clippers.  It took him less than two minutes to get to the foul line, where he scored his first points, and not much longer to throw down his first alley-oop jam.  This type of transition play would become a theme for the Raptors — in racking up 23 points off turnovers and 14 on the break (seemed like more) they beat the Clippers at their own game.  Coincidentally, Gay’s final jump shot gave the Raptors their biggest lead of the night — 31 points — before they went on to win by 25.  Rudy led the way with 20 points on 8-16, and he looked damn good doing it; note the Carmine VIs.

One game certainly doesn’t change my negative opinion of the trade, but the Rudy Gay era is certainly off to a storybook start.  Based on what I saw tonight, this Toronto team has the potential to become a League Pass sensation.  Turns out Kyle Lowry, DeMaR DeRoZaN, Terrence Ross, Rudy Gay, and Amir Johnson (guy was a beast today; 19 points, 16 boards) run a mean break.  Who’da thunk it?

In other joyous Raptor news, Landry Fields made his first three-pointer since joining the team (he’d been 0-8 on the season).  The long-range score cost Colangelo and company a mere $3,506,097.56.  What a bargain!

Moral victory! The Clippers got their asses kicked, but 19,800 Canadians went home hungry after the Raptors fell two points short of the century mark, which is the free pizza threshold at the Air Canada Center.  Caron Butler assured that Jonas Valanciunas wouldn’t get a final shot off by executing a classic heel turn.

Congratulations, Caron; you’ve reduced yourself to the level of Hilton Armstrong.  For real though, faking a handshake and stealing the ball from an opponent who has respectfully opted to dribble the clock out has got to be one of the most outrageously unsportsmanlike actions that one can possibly perform.  Valanciunas would’ve been completely within his rights to commit a very hard foul.

For the third game in a row the Lakers built a huge early lead against a lottery team… and for the third game in a row they became involved in a tight contest down the stretch.  Though the Wolves never were able to recover completely from what had been a 29-point deficit, they did slice the Lakers’ advantage to just four about midway through the fourth quarter.  Fortunately for Los Angeles, Minnesota defends just as poorly as they do; with Pau Gasol (22/12) and Antawn Jamison (18/7) able to come up with a variety of easy scores on the interior, the Wolves simply couldn’t get over the hump.

Based on the past few games and their season as a whole, I believe the Lakers will continue to play improved basketball but will struggle to beat playoff-caliber competition.  The Lakers’ fatal flaw is their inability to defend, even when they try.  Don’t get me wrong, they defend better when they try, but they still don’t defend well enough.  Teams like the Hornets, Suns, and Wolves will miss (and, during this little five-game stretch, have missed) open shots.  As far as I can see, nothing the Lakers are doing is causing their opponents to suffer through multiple scoring droughts of two or three minutes; it’s simply something that happens to bad teams.  For what it’s worth, their offense has looked much better.  The free-flowing ball movement continued on Friday as the Lakers recorded 27 assists on 39 buckets.  For the fifth game in a row, Kobe had eight of them (this stretch remains unprecedented in his career).

Welp, Michael Beasley’s resurgence appears to have been short lived.  In a 109-99 come-from-ahead loss to the Mavericks, Super Cool was super cold as he misfired on 11 of 13 attempts from the floor.  Additionally, he committed a team-leading trio of turnovers (one of which was of the silly variety).  Beasley is definitely cut from a different cloth, but I’m pretty sure this isn’t what he meant when he said he’d be getting “back to Beast.”  In all seriousness, though, the timing of this dud is rather discouraging.  Beasley was coming off one of the best games of his life and had even been showing a bit of consistency under Lindsey Hunter (one more good outing and his points finally would’ve eclipsed his shot attempts).  Hopefully he can bounce back, but he’ll have to do so against some formidable competition.  Beginning tomorrow, the Suns play their next four on the road.  They’ll meet the Warriors, Grizzlies, Thunder, and Hornets, then return home to face the Thunder again.

In yet another come-from-ahead loss, the Milwaukee Bucks brought shame upon their epic throwbacks by getting progressively worse until they finally fell to the Knicks by a final score of 96-86.  The Bucks got off to a great start at The Garden, racking up 28 first-quarter points, but consistent regression ensued.  In the second, third, and fourth periods, the Bucks scored 25, 20, and 13 points respectively.  Meanwhile, the Knicks located easy baskets down the stretch as they scored 10 of their 22 fourth-quarter points in the paint.  Carmelo Anthony’s 25 led all scorers and extended his 20-point game streak to 31.  Tyson Chandler ripped 20 rebounds for the first time since the Mavericks’ championship run and Amare Stoudemire contributed 17 off the bench.  STAT, who exercised his physical prowess against Milwaukee’s lightweight frontcourt, has scored 14 or more in seven consecutive games.

The Miami Heat did not avenge their January 8th loss to the Pacers. As a matter of fact, they got smacked even harder; 102-89, to be precise.  It’s been apparent all year long that the regular season bores the reigning champs, but I thought this was a game they’d be able to get up for what with the recent history between these clubs.  I suppose it means nothing to the Heat unless it’s the playoffs.  Fortunately for them, I sincerely believe this is a rare instance in which the switch can truly be flipped at moment’s notice.

How ’bout David West? 30/7/5 is nice, but peep the FG column — D-West went 12-15 from the floor (!!!).  Indiana’s old reliable was able to achieve such efficiency by putting in yeoman’s work in the painted area, where two thirds of his shots were taken.  Miami actually started their “big” lineup (Haslem at the four, Battier off the pine) to combat Indiana’s great size, but West still had no trouble in exploiting their lack of muscle.

As the Sixers beat the Kings 89-80, this was Andrew Bynum’s hair: 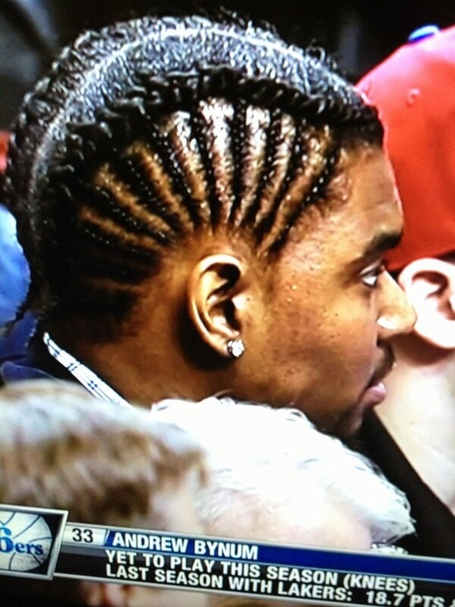 Another distinct style from the Iverson collection, this is essentially a gangsta twist (pun intended) on his french braids from back in December.  This has been your Andrew Bynum follicle update.

In Brooklyn, the Chicago Bulls trotted out a starting lineup of Nate Robinson, the ghost of Rip Hamilton, Luol Deng, Taj Gibson, and  Nazr Mohammed.  They lost, but only by four points.  Something tells me that Gerald Wallace, who recently called getting blown out by the Heat “typical Nets basketball,” probably isn’t exactly thrilled by the fact that the Nets needed Andray Blatche and MarShon Brooks to come in and score 20 points in the fourth quarter to bring Brooklyn back from down three at the end of three.  Taj Gibson, on the other hand, called the tough loss “good” for the Bulls.  In the sense that they once again proved an ability to compete despite being without 60% of their starting lineup, he’s absolutely right.  I’d definitely argue that the Bulls’ moral victory seems more impressive than the Nets’ actual victory.

Ty Lawson and Corey Brewer had 6 of Denver’s 14 steals as the Nuggets forced the Hornets to cough it up 21 times in a 113-98 victory.  Lawson, Brewer and company racked up 32 points off those those 21 turnovers, as well as 32 points on the break and 62 in the paint.  Lawson, who was criticized early in the season for playing far too passively, appears to have turned the corner; he averaged 18 points per game in January (four more than he had previously) and scored 21 last night.  His shooting percentage (.479 in January) has had a positive correlation to his points and shot attempts, which demonstrates precisely why George Karl wants him doing things like this as frequently as possible.

Tayshaun Prince wasted no time getting acclimated to Memphis in an 85-76 victory over the Wizards.  Though he came in off the bench, the Palace Forum Prince played nearly 32 minutes, during which he scored 14 points on 7-11 from the floor.  Ed Davis, on the other hand, played just five minutes and scored his only two points at the free-throw line.  Austin Daye had a similar debut, scratching on a technical free throw in the second quarter for his only point in 4:45.  Already shooting Ts in his first game, though?  That’s kind of impressive, right?  Especially considering that the Grizzlies are the fourth-best foul shooting team in the league.

Box Score Observations: Thad Young had an incredible line — 23/15/2/2 STL — in the aforementioned Sixer victory.  Jeff Green led the Boston Celtics past the Orlando Magic with 17 points (his fourth straight game in double figures).  Tristan Thompson and Marreese Speights combined for 36 points, but the Pistons still ran away from the Cavs 117-99.  Brandon Knight and Kyle Singler dropped 20 apiece whilst Greg Monroe recorded an 18/16 double-double.  The Trail Blazers fell behind early but failed to make a comeback on the Jazz, who got 21 and 10 from Big Al Jefferson in an 86-77 victory.

Highlight Recap, Minnesota Timberwolves Edition: So good of you to actually make this dunk, Derrick Williams…

Highlight Recap, Everyone Else Edition: From Russia with lob. The Clippers did manage a highlight. JaVale McGee celebrates his teammates’ alley-oop conversion. Dion Waiters gets owned at both ends. Stacey King probably had an orgasm, but this is the Nets broadcast. One hell of a spectacular layup. Bird watching. Paul George dupes Mario Chalmers with his Euro step.  Ricky Rubio uses and abuses Steve Nash, and FINISHES! LeBron James goes full circle.  Gameday bucket DeMaR DeRoZaN go boom!