Chris Paul Drives To The Rack, Dunks In Light Traffic

Posted on December 2, 2012 by Stephen Coston 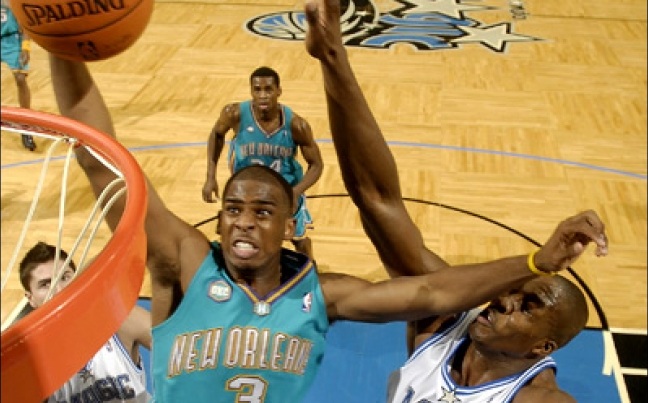 It’s long been a theory of mine that Chris Paul is good for precisely one dunk per season.  His traditional jam almost always occurs after a steal… when he takes a look in the rear view and finds a defender in hot pursuit.  At that point, he speeds it up a little bit, gathers himself, and extends upward with the right hand.  Paul hasn’t slammed one home with any degree of ferocity since he sneaky-dunked on Dwight Howard during his sophomore campaign, but to his credit he always manages to avoid getting hung (sometimes by the skin of his teeth).  Truth be told, the vast majority of Paul’s dunks aren’t anything to write home about — it’s just the novelty of it that makes them exciting.

As you likely recall, Paul completed his annual dunk for ’12/13 during the third quarter of a recent victory over the San Antonio Spurs.  It was the exact sort of dunk I described above — on the break, uncontested, off of a steal (just like the one he had against the Warriors last season, his first as a Clipper).  As part of the ritual I was sure to get hyped.  I exaggerated in regards to the size of the stuff, sent out a few caps-locked tweets, and shared it with you the next morning.  I think I even called it “the annual Chris Paul dunk,” figuring the fun was over until next year.

Turns out that there had been a minor oversight on my part: Chris Paul actually dunked twice last season.  I’d forgotten about his two-hander in Denver, a jam that bucked the one-handed, once-a-year trend that I thought had been established.

So… exactly what makes any of this relevant, you ask?  Well, Chris Paul dunked on Saturday night.  Not only did he dunk, but he did so in a half-court scenario, further disproving all of my theories on Chris Paul’s dunking habits.

Sometimes it’s fun to be wrong!