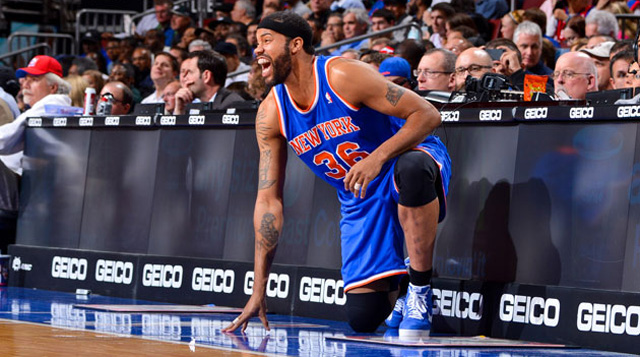 Before the Knicks lost their composure and the Grizzlies quickly blew the game open with a 31-point third quarter, New York and Memphis had been involved in a thrilling first half.  As Carmelo Anthony provided 9 first-quarter points, Zach Randolph kept the Grizzlies in the lead by dominating the boards at both ends of the floor.  The battle became increasingly heated as it progressed into the second quarter, and tempers reached their boiling point when JR Smith and Jerryd Bayless exchanged some pleasantries about four minutes before halftime.  That was basically the extent of all physical confrontation, but jaws continued to flap like a flag in the wind.  Despite the inability to make out much of what was being said, it was clear even via ESPN’s television broadcast that the amount of trash being talked was enough to create a landfill.  Not surprisingly, it was Rasheed Wallace whose mouth was most active of all.  ‘Sheed’s verbal onslaught was fueled by his best game in years — a 13-point, 4-rebound, 3 block performance off the bench — and he was especially vocal about his match up with Rudy Gay, who was unable to stop him on the low block.

The following is a list of things Rasheed said on Friday night.  He got around to shouting at just about everybody, including many of the 17,516 fans in attendance.  I’ve only cited reliable sources, so rest assured that these are real words spoken by the one and only ‘Sheed Wallace (not that you wouldn’t believe that he’d say just about anything).

And as for you, fan, he’ll never be too old to beat yo’ ass.

All of this was made even more awesome by the fact that ‘Sheed was walking the walk.  As I mentioned before, he had a fantastic game.  For the most part, he was able to fight off the allure of the three-point arc and set up shop on the block, where he scored with ease.  To see him doing it at 38… it actually brought back the feelings of frustration that almost embodied him in the past.  As outstanding a career as he had, how great could Rasheed have been had he been able to reign in his emotions and apply himself in a disciplined manner on a nightly basis?  To see him appear so capable in a such a hard-fought contest at the age of 38… it simply demonstrates just how talented he’s always been.