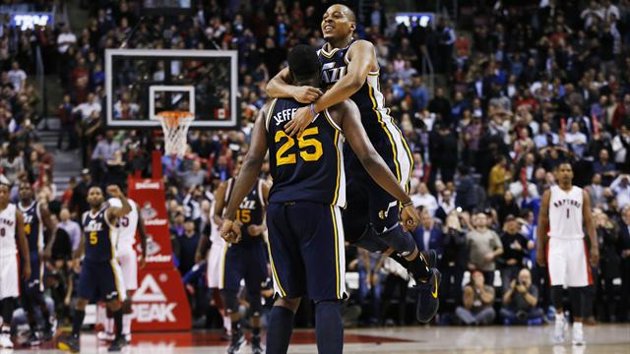 The Utah Jazz have some big decisions (pun intended) to make going forward, but the unmatched depth of their frontcourt continues to pay dividends for the time being. In Toronto, Paul Millsap, Al Jefferson, and Derrick Favors basically made all the plays throughout an exhilarating triple-overtime marathon that saw 277 total points get scored. The madness began when Jefferson knocked down a game-tying three-point shot to knot the game at 104 with 2 seconds to go in regulation. Al was wide open for the shot, but for good reason — he was just 1-25 on career three-point attempts prior to this shot…

Note: Al Jefferson should probably sign with Toronto this offseason, as the Air Canada Center seems to bring him luck.

As you can see, the Jazz went big in order to incorporate all three of Jefferson, Favors, and Millsap down the stretch. While this may surprise some of you, Millsap has slowly transformed from a scrappy hustler into one of the more skilled and versatile fours in the game. He’s also got a penchant for hitting big shots, and he got plenty of opportunities to do so against the Raptors. Millsap nailed a three-pointer in each overtime, making him 8-12 from distance on the season. His 34 points were a team high, and they came on just 16 shots. Millsap was a factor at the defensive end, too. Utah wouldn’t have been able to play the lineup that they did throughout crunch time if not for Millsap’s ability to move his feet on the perimeter, where not only is he capable, but actually very good. This understated strength of his game was demonstrated when he was asked to prevent DeMaR DeRoZaN, who finished with a game-high 37, from scoring what would’ve been a game-winner at the end of OT #1. Impressively, Millsap forced the hyper-athletic wing to settle for a spinning jump shot that had virtually no chance to be made.

Had DeRoZaN been able to get around Millsap, he probably would’ve encountered Derrick Favors at the rim. In super-clutch fashion, Favors had three of his four blocks in the fourth quarter/overtime. One of them came on the final possession of regulation when he stepped out to the elbow area to stifle a potential game-winning jump shot by Terrence Ross. Though he comitted one bad foul on a long Bargnani jumpshot, Favors also excelled in his individual match up. As he finished the game with 15 points on 6-12, Bargnani failed to score a basket in the final 35 minutes.

Jefferson, Millsap, and Favors ultimately combined to score 44 of Utah’s 58 points in the fourth quarter and all three OTs. They also acconted for 32 rebounds, 7 blocks, and 5 assists in the win.

I pretty much called this while I was watching the game with my dad. I actually predicted that Lucas would miss, but still… I called John Lucas for three!

Shout-out to DeMaR DeRoZaN on his career-high 37-point night. He was basically the only Raptor who experienced any success in making plays for himself down the stretch (take this one, for example). DeRoZaN has actually had a really solid season thus far… he’s averaging career bests across the board on a respectable 45% from the floor.

Okay, so that wasn’t exactly on par with some of his 360s from the past… but it still made me feel happy in a nostalgic kind of way. Richardson’s fast-break display was just one of his many buckets (20 points), and one of many spectacular finishes by players from both teams. Jrue Holiday and Monta Ellis converted some nifty layups, but Brandon Jennings takes the cake with this nonsensical wrong-hand reverse. Jennings, who was likely fired up over the fact that Jrue Holiday got a $41 million extension and he didn’t, exploded for 33 points on 21 shots (also had 5 rebounds, 8 assists, 4 steals, and 2 blocks). He really got going at the end of the second quarter when he scored 10 consecutive Bucks points.

Prior to laying a 13-point egg in the fourth quarter, the Sixers kept themselves in this game with their three-point shooting. Dorell Wright and Jason Richardson had seven combined makes through three quarters, but from that point forward Philly was brick city.  They missed all their threes in the fourth and went on to lose by nine.

If Larry Sanders could figure out how to stop fouling he’d probably lead the league in rebounding and shot blocking. Sanders grabbed another nine rebounds (his average) and swatted one shot (averages 2.5) despite limiting himself to just 17 minutes by hacking five times. Sanders is 7th in the league in rebound rate (couldn’t tell you exactly what that is, but it sounds like a measure that backs up my point) and spares Milwaukee of Samuel Dalembert’s stupidity when he’s able to stay on the court.

Rajon Rondo came up a rebound shy of a triple-double (20/9/10), but he kept his streak of 10-assist games alive as he found Brandon Bass for a dunk in the final minute of the fourth quarter. Oddly, Chicago elected not to foul despite being down by 4 with something like 25 seconds to go. Maybe the Bulls are fans of Rajon Rondo? Everyone else is… but based on Boston and Chicago’s recent history, that seems unlikely. Maybe they have something against John Stockton, whose mark was passed by Rondo last night (Magic Johnson retains the ultimate record for now).

The Celtics have beaten two .500 teams since inserting Jason Terry into the starting lineup. Terry has made 10 of 17 shots and is averaging 14 PPG in the two games.  I assume he’ll continue to start all games not against Washington.

Things that 0-8 teams do: blow 11-point fourth-quarter leads. I’m of course referring to the Pistons, who led the Thunder by double digits with 11 minutes to go… and trailed by a bucket with 8 minutes to go. Detroit was held scoreless for over four minutes to begin the fourth and missed 15 of their first 16 shots in the quarter. Following the game, Lawrence Frank cited his team’s inability to adjust to OKC’s switching on screens. I cite Scott Brooks’ decision to stick with Kevin Durant and Russell Westbrook for a combined 88 minutes. Against the Pistons, Scott? C’mon son. Have a little shame.

LeBron James was unstoppable as he led Miami from behind to beat Houston 113-110. James drilled 5 of 8 threes in the second half as he scored 32 of his 38 points, including 18 of his team’s last 25. His run was highlighted by a thirty-foot bomb that brought the Heat to within one, and then the killer crossover/layup that put them in the lead for good. LeBron exercised his dominance in many facets of the game as he scored or assisted on 14 of Miami’s last 21 field goals and stifled James Harden’s last-ditch effort to tie the game at the buzzer (Harden, a fine scorer, looked like a small child trying to iso his big brother).

In all seriousness, though… don’t be mad at Jeremy Lin.  All he did was sign on the dotted line.

Nikola Pekovic was dominating the Mavericks (20 points on 8-13) until he sprained his left ankle by stepping on Vince Carter’s foot. The Timberwolves, who are off to a great start at 5-2, went on to win the game without their leading scorer, but will be without four of five starters if Pekovic misses any time. How Vince Carter’s foot survived being stepped on by Nikola Pekovic, I have no idea. Must’ve been wearing his steel toe Nikes or something.

In other injury news, The Sixers are now saying Andrew Bynum’s knee will keep him out until January. Must be one hell of a bone bruise.

Box Score Observations: DeShawn Stevenson and Kyle Korver made 6 of 10 threes to lead the Hawks past the Blazers 95-87. JJ Hickson racked up 19 points and 18 boards. The Phoenix Suns took 94 shots to Denver’s 76 as they beat the Nuggets 110-100. All five Phoenix starters (as well as Markieff Morris and Shannon Brown off the bench) scored 10 or more. Denver got 14 and 11 from Kenneth Faried. Jrue Holiday nearly had a triple-double in Milwaukee with 25 points, 8 turnovers, and 6 assists. Luol Deng posted 26 and 11 in Chicago’s loss to Boston. Russell Westbrook tooled on Brandon Knight as he went for 33 and 10.