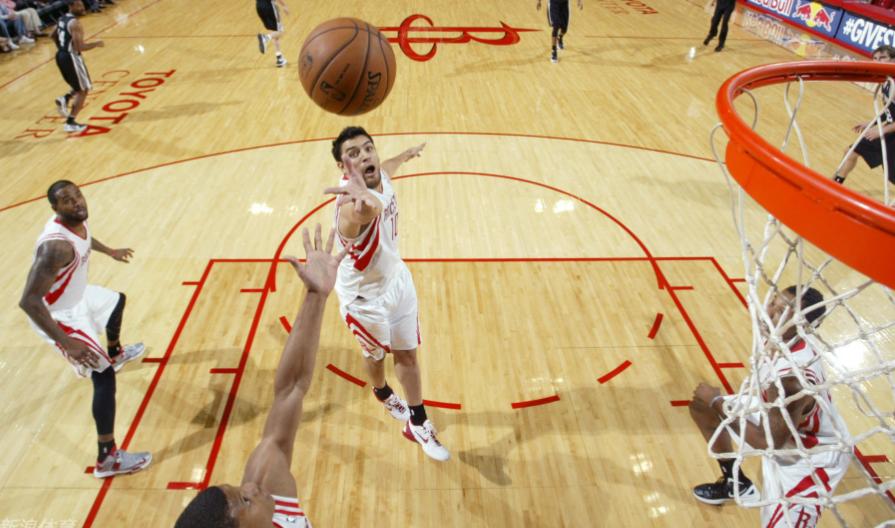 Just three games were on yesterday’s preseason schedule… one that was on before I woke up, one that wasn’t televised, and the one that I watched between the Rockets and the Spurs.  The Spurs took the easy victory, 116-107, as they pulled ahead early and maintained some kind of lead throughout.  Great ball movement amongst regular rotation players helped San Antonio build the early advantage, and guys like Eddy Curry (5-5, 10 points), Wesley Witherspoon (6-9, 17 points) and Corey Joseph (5-9, 12 points) were able to maintain it.  Houston’s Jeremy Lin struggled mightily (1-10), and Kevin Martin took the day off (literally, not figuratively).  Rookies Scott Machado, Jeremy Lamb, and Donatas Motiejunas had some outstanding moments, as did free-agent signee Omer Asik… but overall, it was a rather uneventful affair.  And that, my friends, is why I give to you the following video of Carlos Delfino.

As you can see, Delfino came through with the play of the day, and one of the plays of the preseason, probably.  It’s a good thing he did, too, because I’m not sure what else I could’ve written about this morning.

Hopefully Delfino’s got a few more tricks up his sleeve.  It’d be a shame if he used up his best highlight in the preseason of a contract year.