From Draft Day To The Title, My Top 10 LeBron Moments 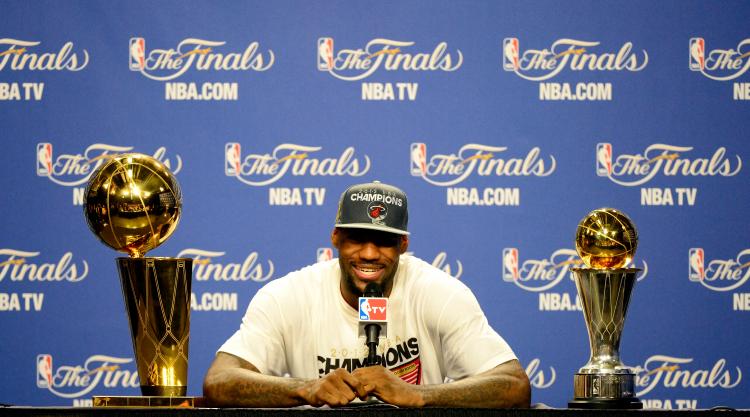 First of all, I’d like to announce that yes, I am alive.  I hate the fact that the blog has been dead over the past few days, especially since there’s currently so much excitement surrounding LeBron James’ first title, but it’s kind of funny… sometimes I can have a million things to say, yet I can’t convert them into a coherent post.  It makes little sense, I know… but it happens from time to time.

Anyway, I’ve decided that the best way for me to break out of this slump is to construct a list.  I like to make lists in these situations because of their self-organizing nature, and hopefully this one will help to jump start my brain.  Summertime is when I’ve got to be extra creative, so it’d suck to see my mind go on an extended vacation right now.

#10: May 27, 2007: Monster dunk on ‘Sheed Wallace: Before he lept clear over the head of John Lucas for an alley-oop jam, I always considered this the best dunk of LeBron’s career.  While I must admit that jumping over a dude’s head for a lob is one of the most incredible things I’ve ever seen a man do, I still think LeBron’s one-handed smash over Rasheed is my personal favorite of his many dunks.  It’s probably the most memorable, too, as it came in the first win of his coming of age series—the ’07 Conference Finals, when he was able to knock the defending-conference-champion Pistons off their perch to achieve his first Finals berth.

#9: February 4, 2009: 52-point triple-double vs Knicks: This was just a fun week to be a basketball fan.  Meaningless regular-season games against a notoriously-bad defensive team be damned, watching Kobe Bryant light it up for 61 only to be one-upped by LeBron James two nights later made for a couple of exhilarating winter days.  I forgot that my dude Al Harrington went off for 39, too.  What I didn’t forget is the league’s lame-ass decision to go back and revoke one of LB’s boards.  How the hell can you backtrack, look at the film, and give LeBron’s rebound to Ben Wallace?  Can we order a thorough examination of Chris Paul’s assists throughout his time with the Hornets?

#8: 2012 Finals, game four: Three-point dagger: Dwyane Wade and Mario Chalmers had to step up and score a couple more buckets to finish this one off, but LeBron’s one-legged, cold-blooded, reputation-shattering three-pointer was definitely the standout crunch-time moment from the crucial victory that put Miami up 3-1 in the series.  As he did throughout the 2012 postseason, LeBron had answered the call when his team needed him most.

#7: 2011 Semifinals: Dethroning of the Celtics: LeBron may not have won the championship in his inaugural run with the Heat, but he did absolutely f@cking destroy his arch nemesis—a Celtics team he’d never been able to overcome—in five brief games. He left his mark on the series in the deciding game five as he dropped 33 points, including the game’s final 10.

#6: February 20, 2009: 55 points @ Milwaukee: This particular game will always be a favorite of mine.  I watched it live, but my decision to tune in had nothing to do with LeBron James.  You see, back in ’09 I was Charlie Villanueva’s #1 fan.  That may seem a little strange now, but he actually averaged 16 and 7 that season (in under 27 minutes a night, too).  Call me crazy, but CV seemed to have a little Nowitzki in him.  Unfortunately, Black Dirk never panned out… but this game did see him drop 26 before being ejected for choking Zydrunas Ilgauskas.  As for LeBron, he scored nearly as many (16) in approximately two minutes.  So much f@cking win in this game… I can still see my younger self going absolutely bonkers on the basement sofa.

#5: May 22, 2009: Game-winner vs Orlando: The series didn’t end well for the Cavaliers, but Lebron certainly wasn’t at fault—you may recall that he averaged 38.5 PPG through the six-game defeat.  His individual dominance culminated in the closing moments of game two as he sunk an unforgettable three-point shot in the grill of Hedo Turkeyglue.

#4: 2012 Finals, game two: Clutch bank shot: With Miami facing a potential 0-2 hole, Dwyane Wade has committed a horrendous turnover resulting in a Russell Westbrook dunk, a one-possession game, and a 15-point lead lost. The ball finds its way into LeBron’s hands, and it’s his time to put up or shut up. Much to the chagrin of his band of detractors, he puts up.

#3: 2012 Playoffs: 40 @ Indiana, 45 @ Boston: I’ve chosen to combine these two games into one moment because I can’t decide which was better.  I assume most would roll with the 45-pointer at the Garden, but I’m not so sure that the 40-point, 18-rebound, 9-assist performance wasn’t LeBron’s finest of his title run.  Remember, it was his brilliant playmaking ability that ignited an ice-cold Dwyane Wade, who ended up going off for 30 after a 3-10 start.  Also, had James not answered Lance Stephenson’s choke taunt in this game there likely would’ve been no game six against Boston.  I think this semifinals explosion against Indiana was as pressure packed as any game of James’ career… I mean, imagine if he’d allowed Miami to be sent packing in the second damn round?  Bosh or no Bosh, that would’ve been the media sh!t storm to end all media sh!t storms.

#2: May 31, 2007: 48 points @ Detroit: You know what really stands out about this performance?  Take a look at his final 29 and tell me what you see.  How about four driving dunks (and multiple driving layups, including the game-winner)?  Remember, this is a Conference Finals game against a championship-caliber Pistons team that always hung its hat on its defense… and this is a 22-year-old kid repeatedly taking Tayshaun Prince to the rack as if it was a casual game of one-on-one on the nine-foot goal.  The array of step-back jumpers was mind blowing, but the ease with which he was carving up that defense down the stretch… this kid was a grown f@ckin’ man.

Love him or hate him, you ought to respect what LeBron James has just accomplished.  Being the first megastar of the information age, James has faced more criticism, more scrutiny than any athlete in the history of sports.  Somehow, he’s managed to keep improving, keep his head screwed on straight, and keep his eye on the prize.  LeBron’s title symbolizes perseverance, a value we should all be able to appreciate.

That and the fact that this almost certainly won’t be the last time you’ll be forced to watch him hoist the Larry O’Brien trophy.  Learn to love it, folks… learn to love it.