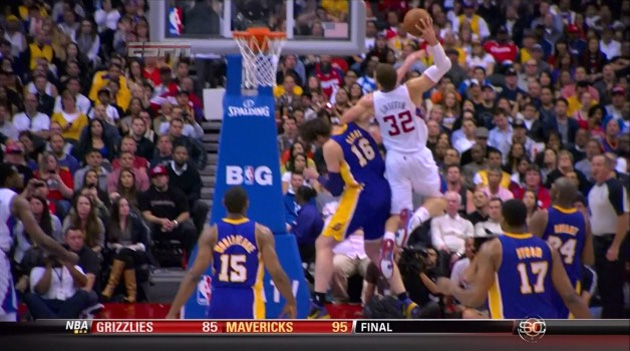 Have you ever wondered what it’s like to be Mozgov’d by Blake Griffin?  Well, now there are three people who can offer you a description of the experience.  According to Pau Gasol, Griffin’s latest victim, it’s impossible to see it coming.  It happens quickly, and the pain doesn’t begin until after it’s all over.

“You don’t really see what happened,” Gasol said.  “It was quick, a hit-and-run kind of thing, right?  The ball went in, I was on my a–, I woke up, I stood up and told the referee I had a f—ing forearm on my face, on my throat, and that’s something that needs to be looked at.  But it happened too quick.  I didn’t realize.”

And since you don’t really see what happened, you have to go back and watch it.

“I’ll probably watch it, just because,” Gasol said with a smile.  “I don’t really have a great desire of watching it.  But my teammates told me it was a pretty impressive play.”

Clearly, Pau Gasol’s teammates are not Kevin Durant.  That’s all part of the acceptance and recovery process, though.  Each Mozgov victim must either accept what happened or spend his life in an eternal state of saltiness, like Kendrick Perkins.

Gasol was rattled for the remainder of the game.  He was out there committing double fouls, desperately trying to play it off while his shame shone through in the form of his agitated play.  However, I expect that he’ll make a full a full recovery.  His sensible comments give promise of mental stability.