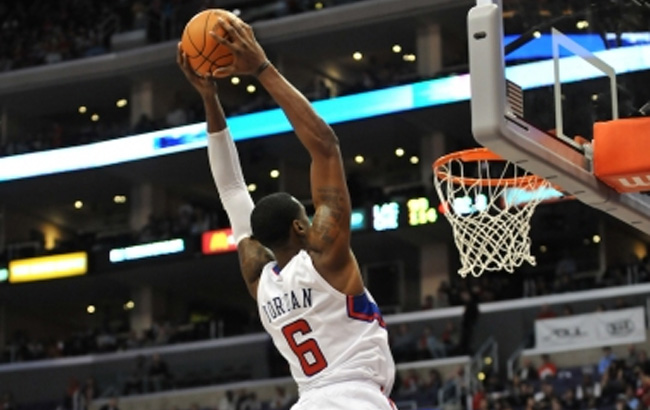 It’s official: DeAndre Jordan is Lob City’s–and the NBA’s–premier in-game dunker.  It’s been that way since the season began, but I didn’t fully realize it until I watched DeAndre throw down six ferocious slam dunks against a Toronto Raptors frontcourt that is vulnerable as ever.  Jordan got busy with one hand, two hands, frontwards, backwards, off of one foot, off of two feet… basically, in just 25 minutes of playing time, he put down a spectacular dunk of nearly every variety.

With his 16 points and 16 rebounds, call him King DeAndre.  He mercilessly rules over his Lob City court as Blake Griffin and Chris Paul play second and third fiddle.  Jordan may not be most responsible for LA’s 9-5 record, but he’s the one cranking out the bulk of the highlights, and that’s what Lob City’s all about.  If they just so happen to win some ball games in the process?  That’s cool… Blake and Chris can have credit for that.

Dunking isn’t the only field in which Jordan excells.  The King of Lob City also happens to be the association’s leading shot blocker.  Actually, it looks like he’s currently in a tie with Javale McGee of the Wizards, who are apparently an NBA team.  I thought they’d been collectively sent down to the D-League.  Anyway, that’s not the point.  The point is that DeAndre’s an awesome shot blocker, and he’s got a unique strategy.  Watch carefully as he tosses this Leandro Barbosa floater.

Did you notice what he did there?  Yeah, he took two swipes at that shot–one with each hand.  By attempting to block shots in this way, DeAndre not only gives himself two chances to deflect the shot, but also an opportunity to re-direct the ball if he gets it on the first swipe.  For instance: exhibit A.  The first time I saw him do this I thought to myself WTF… that was like… a helicopter block!  I figured it was just something he did that one time, but apparently this is a shot-blocking tactic that he plans to utilize often.  I love it.

You know, the Clippers are in desperate need of another servicable big off the bench, but I hope they can’t even find one.  I like watching DeAndre play too much.  It’s gotten to the point where I’m disappointed when he leaves the game even if Blake stays in!  DeAndre has taken power dunking to another level this season.  He’s quick off of the floor like Dwight, and he’s devestating like Shaq.  He’s got the body control of a small forward, and he’s got the arms of an orangutan.  The best dunker in the NBA plays for the Clippers, but he’s not Blake Griffin.

Tommy Heinsohn used to drive me crazy.  Over the years I’ve realized that he’s tolerable if you simply take him for what he is: a grumpy old homer who can’t help but feel that the Celtics are always being cheated.  That being said, it’s awfully rare that I can co-sign the old man.  Yesterday afternoon, though, Tommy had a gem.  Violet Palmer, the worst official in the history of professional basketball (yes, worse than the guy that put money on games) made a bogus foul call on Marquis Daniels.  Heinsohn watched the replay, grunted, and simply said, “well that’s Violet ‘you ain’t no flower’ Palmer.”

Roy Hibbert scored 8 of his 18 in the fourth quarter as blood dripped from his broken nose.  It was a gutsy performance by he and the Pacers, who recovered from a seven-point fourth quarter defecit.  At the 7:45 mark, Hibbert’s rampage began.  He scored three straight Pacer buckets on a string of hook shots that brought Indy to within one, then assisted on a Darren Collison three-pointer that tied the game at 86.  The Pacers would fall behind once again, though, after Danny Granger was whistled for fouling Matt Barnes with just two seconds on the shot clock.  It was clearly a clean block, and I figured this would be it for the Pacers.  It’s demoralizing to play tough defense for 22 seconds and give up two points, let alone give them up on a bogus call.  Like the busted nose, Hibbert didn’t allow this unfortunate turn of events to keep he or the Pacers down.  He came through with yet another score in the paint, and with some help from Paul George, Danny Granger, and Darren Collison he was able to close out an impressive 98-96 win at Staples Center.

Hibbert’s 18 came on 9-13 as Andrew Bynum went 6-12 for 16 of his own.  It was another unimpressive showing from Bynum, who missed some pretty basic shots and obviously failed to contain Hibbert.  Bynum has had his share of struggles on the offensive end over the past few weeks, and I question whether or not his head is in the game.  Kobe Bryant could’ve used a little help last night as he carried the team with 33 points.  He took 30 shots, but at no point did I feel like he was forcing them in this game.  Someone had to put the ball in the basket, and it wasn’t going to be the enigmatic Bynum or the passive (litterally, he had 10 assists) Pau Gasol.

Miami is no longer undefeated without Dwyane Wade.  The Heat struggled to put the ball in the hoop as they were beaten by the Bucks 82-91.  So, can we stop talking about how the Heat are a better team without Wade, now?  His offensive talents certainly would’ve come in handy for a team that shot 37% from the floor last night.

Box Score Observations: Mickael Pietrus made a pair of three-pointers as he scored 14 on 5-8.  Thanks in part to his efforts the Celtics were barely able to beat the Washington Wizards.  Paul Pierce went for 34/8/10.  John Wall continues to play better… he had 27/10/7.  All four PF/Cs that saw minutes in Toronto’s 91-103 loss to the Clippers were unable to collectively out-score DeAndre Jordan.  They only out-rebounded him by two, and he returned the favor by out-blocking them by the same amount.  Chauncey Billups had 14 assists, but he’s still an asshole.  He shot 1-9 as Mo Williams dropped 26 off the bench.