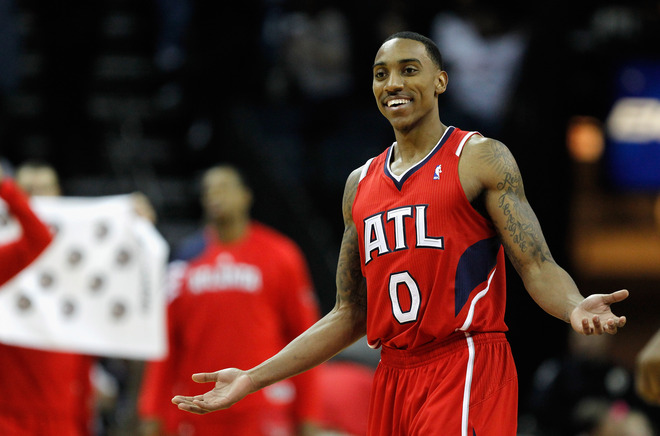 The Atlanta Hawks have played four overtimes in the first two games of a back-to-back-to-back.  At least the Bobcats zoned up late and helped them escape from Charlotte with a win (102-96).  I can’t figure out why the ‘Cats decided to go zone during parts of the fourth quarter and overtime.  The Hawks aren’t exactly prolific in the halfcourt and are prone to settling for outside shots anyway.  If you want the Hawks to shoot from the perimeter just lock down for 24 seconds and they’ll do it.  The zone allowed Marvin Williams a couple of wide open looks from three-point range (which he knocked down) and cost the ‘Cats a few big rebounds.  Speaking of rebounds, BJ Mullens had 5 of those in 24 minutes.  He also set a new career high in scoring (17) for the third game in a row and kept DJ White’s ass planted on the bench during crunch time.  I’m telling you, this goofy-lookin’ bastard is a player.  He may look like Ammo, but he’s the anti-Ammo.

The Hawks, who are presumably gassed, move on to play the Bulls at the highlight factory this evening.  My main man Ivan Johnson, who went scoreless in his encore, will have to step his game up and provide good minutes if the Hawks want to avenge that disaster of a loss in Chicago.

I haven’t heard much talk about Dwight Howard thus far.  Let’s give the man some credit because he’s playing really well.  Dwight may or may not be interested in a future with the Magic, but he’s doing an un-Carmelo-like job of putting next season on the back burner and playing some ball.  Dwight put up 28/15 in a tough loss to the Bulls (7-1) last night, and he’s averaging 20/16 on the season.  His points are down a little from last year, but his boards, assists, and blocks are up.  Dwight has gone out there every game and been the same ol’ Dwight, refusing to let distractions effect his play.  Orlando is now 5-3, which isn’t bad considering the supporting cast surrounding Superman Jr.  I know Ryan Anderson has been doing numbers, but how many teams start the season 5-3 with Ryan Anderson as their second best player?

Blake Griffin says Lob City isn’t what the Clippers are about.  Well that’s lame.  Embrace it, Blake!  Be about it!  There’s no need to resent the fact that flash is currently your team’s calling card.  Spectacular basketball can also be winning basketball, my friend.  I’m pretty sure one of the greatest teams of all-time is known as “Showtime.”  To embrace Lob City is to recognize the strengths of your squad.  To fight the moniker is to argue the obvious strengths of your roster.  Get out there, toss lobs, dunk balls, and win games.  Fans love Lob City, so get wins as Lob City.  With athletes like the ones on this team it’s the practical way to play.

Kobe Bryant took over at Staples, scoring 39 points and dishing 7 assists as the Lakers beat the Dubs 97-90.  What happened in the second half was Kobe’s greatness, which I don’t need to tell you about.  What happened in the first half was both unexpected and interesting.  It didn’t last, but the Warriors had held the Lakers to 35 points and 38.6% shooting.  Utilizing a 2-3 zone anchored by Kwame Brown, the Warriors were able to completely eliminate Andrew Bynum’s impact on the offensive end.  The Lakers were forced to the perimeter and missed the majority of their jumpers, resulting in a four-point deficit that could’ve been much larger had Monta Ellis been able to get his sh!t together (Nate Robinson led the Warriors with 9 PTS at the half).  Anyway, Kwame did an excellent job of keeping Bynum away from the basket all night long (the zone was a great team effort, but it wouldn’t have worked nearly as well without Brown’s strength), and I want to make sure this man gets a little credit for the work he put it.  Keeping a forearm in the back of an opposing big man is a valuable yet unheralded job, and Kwame is one of the best in the league at getting it done.  Brown had 13 points and 6 boards last night, but more importantly he held Bynum to 9 points on 3-9 (I think at least two of those points were scored with Brown on the bench, too).  AB contributed big on the glass with 16 boards, and I’m not trying to say his game was all bad; I’m just trying to give Kwame some credit for his role in neutralizing a guy who’s been scoring at will thus far.  Kwame has had a really stong season with the Warriors to this point, and I’d even say he’s been worth $7 million.  Look at some of these names: Brendan Haywood, Kendrick Perkins, Drew Gooden… they’re all earning about the same salary as Kwame, yet he’s out-performed all of them.

TNT and ESPN need to make a trade.  I’m talking Jeff Van Gundy to Turner Broadcasting for both of the Millers and a few draft picks.  Van Gundy is too brilliant to waste his career with the pitiful supporting cast he’s got at ESPN… he needs to join a contender.  Seriously though, ESPN/ABC’s presentation of NBA games is really bad.  It’s geared towards the casual fan, which I understand, but TNT reaches out to the hard-core fans and they’re the ones winning all of the awards and sh!t.  Step your game up or trade Van Gundy to a better team, ESPN.

A few NBA teams will be wearing some awesome ABA throwbacks this season.  While I’m all for this and I can’t wait to see these uniforms in actions, I wish the NBA would bring back some jerseys from the ’90s.  How come those Bucks jerseys with the big deer are never brought back, or maybe even Houston’s pinstriped pajamas?  When the NBA does throwbacks they’re always crazy-old, and while the crazy-old unis are cool, I think some love should be shown to more recent classics as well.  It doesn’t have to be an antique to be awesome, NBA.

The Kings still suck, and DeMarcus Cousins still has a lot of growing up to do.  I’ve been seeing a lot of knee-jerk reactions since that comeback victory they picked up over the Bucks in their first game under coach Keith Smart.  DeMarcus and Tyreke both played really well, causing some folks to overreact.  In said victory over the Bogut-less Bucks, the Kings had just 16 assists to 19 turnovers and missed 17 of 21 three-point attempts.  While I give them credit for scoring 35 in the fourth and taking the W, it’s not like the problems of the Paul Westphal era have been resolved.  Bad teams often reel off a few victories after a coaching change.  I expect everything to be back to normal in Sacramento within a week or so.  This team’s flaws will continue to show as they’ll rely on one-on-one play throughout the season.  The loss of Chuck Hayes, one of their few players with a concrete understanding of how to play the game, won’t help.

Box Score Observations: The Knicks barely, and I mean barely eked out a 99-96 win over the Wizards, who remain undefeated.  They trailed big early on and had been completely reliant on Amare and Carmelo, who had 36 of the team’s 46 in the first half.  New York, you have a problem.  On the same day that I called them “best in the west,” Portland lost to the Suns by 25.  That would happen.  Anthony Morrow knocked down six triples as the Nets picked up a win over the Craptors.  Spencer Hawes (WTF gas gotten into this fool?) scored 16 points and gathered up 14 boards in a Philadelphia win over Detroit.  The Rubio/Irving match up didn’t leave me with anything to say.  Neither player reached 15 points or double-figure assists, and it was the Antawn Jamison show as Cleveland won 98-87.

Highlight Recap: I’m going to have to leave you with the top 10 today because I woke up late and don’t want to further delay the publishing of this post.  I don’t think it was an incredible night in the highlight department anyway.