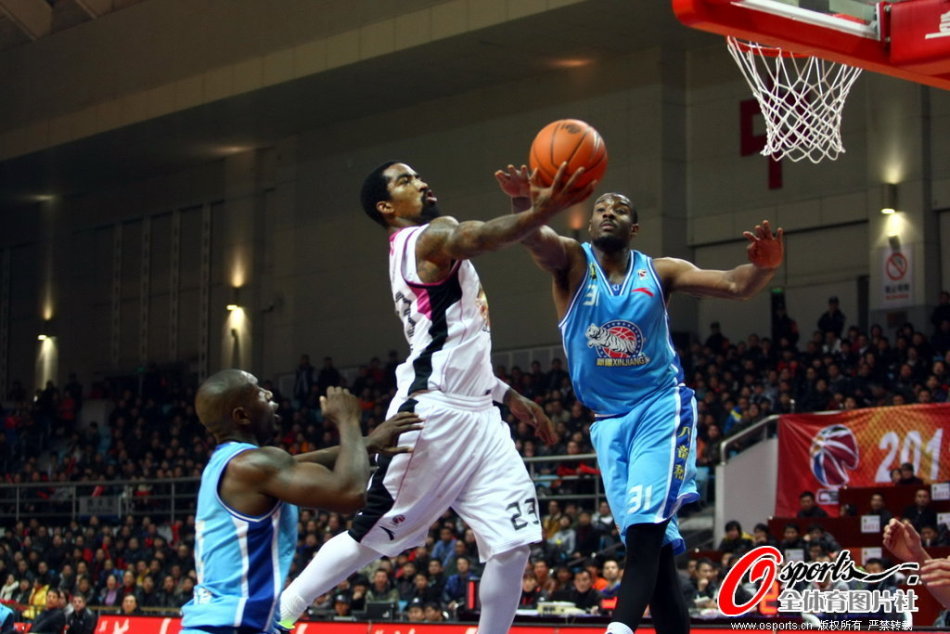 Zhejiang 114, Xinjiang 112: JR Smith had a very quiet first half, but finished just one rebound shy of a triple-double (24/9/12) and carried Zhejiang to a two-point win in overtime.  As for Xinjiang, if there’s such a thing as a good loss, this was it.  They put their two new imports, Gani Lawal and Tim Pickett, together for the first time, and finally, it looks like Xinjiang has themselves a pair of Americans who will produce at a high level on a nightly basis.  Lawal had 26 and 10 while Pickett scored a game-high 35, including the shot that put the game into OT and a clutch three-pointer on the previous possession.

Josh Boone came up huge in this game.  He scored the first two buckets of OT and finished up with a total of 25 points and 22 boards.  JR Smith was excellent down the stretch, scoring almost at will.  While Xinjiang got some questionable calls in their favor (and still gave the officials an earfull all night long), JR quietly accepted the decisions of the officials and made big shots.

Shandong 100, Jilin 99: Shandong overcame 34 points from Cartier Martin and picked up a close victory after last round’s painful defeat at the final buzzer.  Former Charlotte Bobcat Alan Anderson went off for 50 points on just 28 shots in his finest performance of the season.  He’s been a volume shooter all year long, but in this game he was feeling it and came through with stunning efficiency.

Foshan 97, Guangsha 96: Guangsha was fortunate to win with a buzzer-beating three-pointer last round, but there was no such luck today.  Despite 30 points and 10 boards from Wilson Chandler, Guangsha took a loss to previously 15th-ranked Foshan.  I wasn’t able to watch this one, but it appears that Guangsha could’ve benefitted from getting the ball to Peter John Ramos, who missed just 3 of 12 shots.  Chandler scored pretty well by getting to the line 12 times, but he needed 24 shots to score his 30.  This white guy I’ve never been able to identify led Foshan with 27.

Qindago 111, Liaoning 96: Lester Hudson and company are just two games under .500 with their third-consecutive victory.  Hudson posted another excellent all-around line of 33 points, 6 boards, and 12 assists.  Liaoning got just 3 rebounds from Josh Powell as they were beaten on the glass.

Guangdong 110, Tianjin 97: No surprises here; Guangdong stomped one of the league’s worst teams by 13 as Aaron Brooks had his best game yet.  Brooks followed up a 32-point effort in a huge win over Beijing with 40 points on 7-12 from distance.  Tianjin was led by Chinese baller Zhang Nan and his 25 points.

Dongguan 109, Beijing 85: The Beijing Ducks are clearly no longer the team that started the season with 13 wins in a row.  Since that 13th win, they’ve lost five of six.  Had Guangsha been able to beat Foshan, Beijing would’ve fallen to third in the standings.  Dongguan got game-highs in both points and rebounds out of Shavlik Randolph, who hit four three-pointers on his was to 31 and 11.  Stephon Marbury also had 31 to go along with 9 assists.  Randolph Morris struggled, going 6-17 from the floor.

Fujian 105, Jiangsu 84: Fujian got a well-rounded effort from five players who scored in double figures.  Anthony Roberson’s 34 led those players by a pretty wide margin, but hey, still a nice team win.  Jackson Vroman got back to his beasty ways for Jiangsu with 28 and 12.  Marcus Williams went 0-6 from three-point land.

Check back later, I’m about to try to track down some videos.