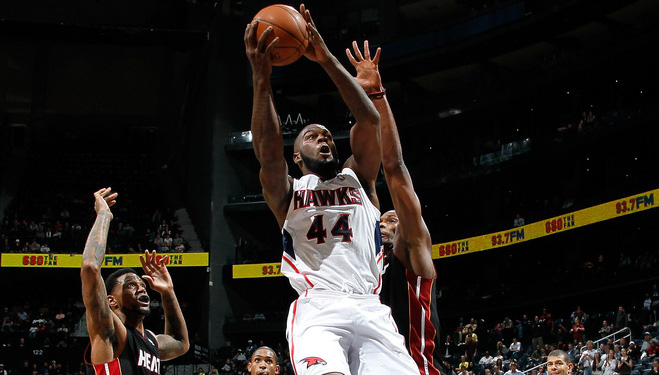 I can’t believe I’m about to kick off a story with a rap lyric, but f@ck it.  Jay-Z once said he’s “seen hoop dreams deflate like a true fiends weight.”  Of all the hip-hop lyrics that reference pro basketball, this may be the one that hits hardest.  Most basketball players, even the supremely-talented ones, never make it on the highest level.  Some lose focus, some struggle mightily in the classroom, and others fall victim to catastrophic injuries.  Many get caught up in drugs and the illegal life, and lots of guys simply get stuck in bad situations.  There are so many factors beyond raw basketball ability that go into the making of an NBA player, it’s a wonder that anyone ever pulls it off.  After being kicked out of a foreign league for disciplinary reasons, it appeared that Ivan Johnson could be the next hoop dreamer to become part of the unsettling picture that Hov’s words captured back in 2001.  Instead, Ivan suited up for the Atlanta Hawks tonight.  In an unexpected development, he checked into the game.  In an even more unexpected development, he made his presence felt.  No need to pinch youself, Ivan… this was real life.

My thoughts on Heat @ Hawks were ready to be typed out before the fourth quarter had even begun.  It looked like the Heat were well on their way to taking a Wade-less, LeBron-less victory, but no matter what happened I was going to take Atlanta’s lackluster effort and use it as a springboard to launch into a rant on their lack of action that has resulted in what seems to be a permanent middle-of-the-pack status.  That was until Ivan Johnson checked into the game and turned the snooze-fest into a triple-overtime affair that wiped the first half of a battle between the Lakers and Blazers right off of national TV.  Due to this surprising twist, my hand was forced.  My Hawks rant will have to wait.  Ivan Johnson put that sh!t on hold.

Ivan Johnson (born April 10, 1984) is an American professional basketball player for the Atlanta Hawks of the National Basketball Association.

That’s all I knew about the 27-year-old former D-Leaguer until about 11 PM.  I’d seen him play in one preseason contest against the Charlotte Bobcats, but he didn’t really make an impression.  Kemba Walker stole the show that night, and the only thing I remember thinking about Johnson was that he looks like a man I wouldn’t want to fight.  Standing at a reported 6’8 and weighing in at 230 pounds, he’s got the stature of a bruiser.  His heavily-tattooed arms, down-south-style beard, and nasty scowl complete the image.

Turns out I’m not the only one who immediately took note of his appearance.  Via the Atlanta Journal Constitution…

Johnson is an intimidating dude–the joke among Hawks staff was who would tell Johnson he was cut if the day came. He’s built like a linebacker and always seems to look angry. One day in practice Johnson came barreling down the lane with the ball and Tracy McGrady wisely stepped aside.

Johnson has a volatile temperment, too…

Johnson was banned by the Korean Basketball League last year after what an official described as “a record of frequent misconducts” culminating with an obscene gesture at a game official. Johnson also was reportedly run off from Oregon for “anger management” issues and last season was benched by the Erie BayHawks after earning too many technical fouls.

The inability to control his emotions has proven to be an obstacle in his long journey to the NBA, but tonight his edge turned out to be exactly what the doctor ordered for an Atlanta team that appeared to be content to go through the motions.  I’m telling you, the first 30 minutes of this game were so uninteresting that the most entertaining aspect had been listening to Charles Barkley’s constant criticism of anything and everything associated with the Hawks.  Don’t get me wrong, they deserved it.  Upon Ivan’s entry, they trailed by 10 to a team who’s only ties to the actual Miami Heat were Chris Bosh and the letters H-E-A-T written across the front of their jerseys.  It had been a sad effort to that point, but Ivan Johnson, who was quite possibly the most unsuspecting player in uniform, would instantly turn it all around.

Johnson entered the game with 4:30 to play in the third.  Within 30 seconds he’d committed an offensive foul, but hey, it was a sign of activity.  By the end of the period he’d scored 4 points and grabbed a rebound.  Oh, and the Hawks suddenly had a lead, which they just so happened to take on a pair of Ivan Johnson freethrows.  His energy had sparked a 12-0 run, and he was just getting started.

Johnson scored the first five Atlanta points of the fourth quarter, and at this point he’d become not just a spark off the bench, but the biggest contributor of the night.  It wasn’t just his scoring punch and his hustle, but his physical presence that made him such a factor.  Everyone who came within arm’s reach of Johnson was bodied.  He didn’t body guys in a way that caused him to pick up stupid fouls (although he did end up fouling out), though.  It was a subtle thing he did to make dudes think twice about getting physical.  I loved it, and so did Charles Barkley and Reggie Miller, who were forced to stop ragging on the Hawks to rave about this fearless rookie who came out of nowhere and brought a whole new dynamic to the game.

Ivan went on to make key contributions in the first and second overtimes, finishing with 13 points, 4 rebounds, and 6 fouls.  He was forced to watch from the bench as Chris Bosh and the Miami squad finally put the finishing touches on a 116-109 victory, but no matter; his name came up in Bosh’s post-game chat with Craig Sager, which speaks for the incredible impact he was able to make in just 21 minutes of play.

It’s been a long time coming for Johnson, who promised his now-deceased mother that he’d continue to work towards his goal of playing in the NBA.  I suppose his dream actually came true as few took notice; back when he survived the final cuts of training camp, or when he first entered a regular season game just over a week ago.  Although those will remain memorable milestones in Johnson’s basketball journey, I doubt that he dreamed of simply making the cut, or sitting at the end of the bench until the lead was big enough that he could be trusted not to blow it.  Ivan Johnson most certainly dreamed of doing what he did tonight–leaving his mark on an NBA game, and earning the respect of his peers.

“As you get older your dream starts to fade after a while. You have just got to keep pushing, man. That’s what I kept doing…I have been working so hard to get here over the years. Now that I’m here, ain’t no messing it up.”

To watch a hard-working man’s efforts pay off right in front of your eyes… it’s an incredible thing facilitated by NBA basketball that isn’t talked about as often as it should be.  I feel so happy for Ivan Johnson right now it’s like I’ve known him all my life, yet I only became aware of his existance last month.  It’s stories like this one that keep me pushing towards my own goals.  If it wasn’t for Ivan Johnson’s inspirational performance I’d be asleep right now.  Instead, I’m awake at 4:01 AM authoring the 733rd post in this blog’s history.  I’m really no different from Ivan Johnson, except I write about basketball rather than play it, and I haven’t kept pushing for long enough just yet.

Hopefully I don’t end up a part of Jay-Z’s lyric.  I’d rather be the Ivan Johnson of blogging.