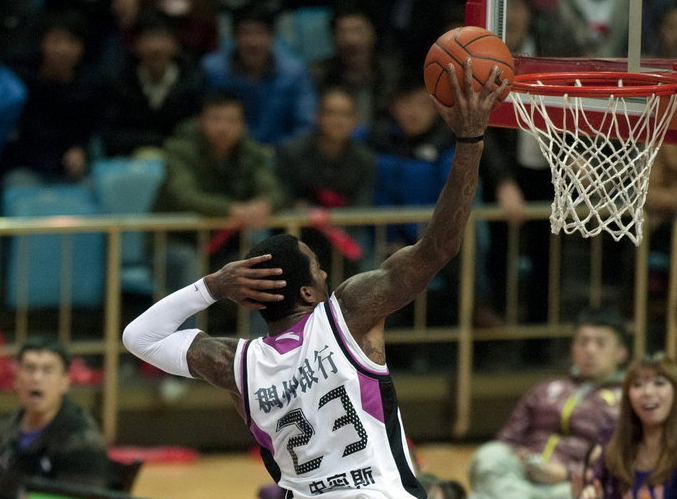 Zhejiang 103, Foshan 96: As well as JR Smith has performed lately, I think he could be even better if he’d stop taking so many jumpers.  I’m sure he didn’t want to, but in this game he was forced to resort to something other than the three-pointer to avoid a three-game losing streak.  JR missed all five of his long-range attempts today, most of which came pretty early in the game.  With Zhejiang down three with a minute and 37 seconds to go, JR decided to take the ball from the backcourt straight to the rack. The result was a spectacular and-one poster dunk, and was fouled in the process.  He hit the freethrow to make it 96 all.  Foshan was unable to score on the ensuing possession, and JR was foolishly fouled after grabbing a rebound.  He made two more, putting Zhejiang up 98-96.  Next, Smith stole a pass and took it the other way for an uncontested slam that made it 100-96.  Foshan failed to score the rest of the way as JR hit a couple more freethrows to make it 9 of the game’s last 10 for him.  He had a total of 38 on 13-24.  A small crowd chanted his named as he waved his arms and shouted excitedly during the closing seconds.

Zhejiang’s Josh Boone had a big double-double with 17 points and 19 boards.  Marcus Haislip led Foshan with 26.  There were 81 total freethrows taken in the game making it a little painful to watch up until the exciting ending.

Guangsha 126, Shanxi 112: Even though Marcus Williams and Charles Gaines sat for the entire first quarter, Shanxi was able to score 26 points.  Even that left them down four, though, and Guangsha was just getting started.  Chandler and Ramos got off to slow starts (combined to make just three of their first nine), but both played well down the stretch–particularly Ramons.  Peter John activated beast-mode a little before the midway point of the third quarter, which is when Guangsha started to run away with it.  Ramos finished with 34 points and 14 boards while Chandler put up 19/8.  Marcus Williams was good for Shanxi with a game-high 36 points on 13-16.  Charles Gaines did most of his damage (28/10) when the game was already over.  Gaines and Williams were noticably angry with the refs throughout the game.  I thought there were bad calls made in favor of both teams.

Guangdong 128, Dongguan 104: Aaron Brooks had one of his bigger statistical games of the season with 27 points, 6 rebounds, and 10 assists in this blowout victory.  James Singleton also had a big game with 24/10/5.  Brooks and Singleton haven’t put up numbers like some of the other NBA guys this season because Guangdong is such a good team with more depth than most of the other squads.  For Dongguan, Shavlik Randolph had 33/10 and Josh Akognon scored 34.

Beijing 105, Qindago 97: Qindago’s brief winning streak has come to an end, but Beijing’s 12-gamer has not.  Marbury’s 28/5/7 and Randolph Morris’s 30 helped the Ducks remain undefeated.  Lester Hudson began the game 1-10 from three, but finished 5-18 from range as he scored 31 points.  In just his second game with Qindago Olumide Oyedeji posted 22/17.

Liaoning 108, Fujian 94: Will McDonald was pretty beastly with his 39 points and 11 boards, but Fujian shot far too poorly (38%) to win this one.  Rodney Carney scored 35 for Liaoning.  Fujian actually won the second half by 10 points, but they’d fallen so far behind by halftime that it didn’t matter.

Shandong 99, Jiangsu 91: Marcus Williams had 30, Jackson Vroman 24, and my main man Hu Xuefeng 26, but they still lost to Alan Anderson and company by eight.  Anderson and Othello Hunter had 23 a piece while also combining for 28 boards.  Shandong won the fourth quarter 31-18.

Xinjiang 94, Jilin 89: The Flying Tigers overcame a game-high 29 points from Cartier Martin and escaped with a five-point victory.  Kenyon Martin continues to put up extremely pedestrian numbers (12/8) as Patty Mills continues to dominate (26/7/3).