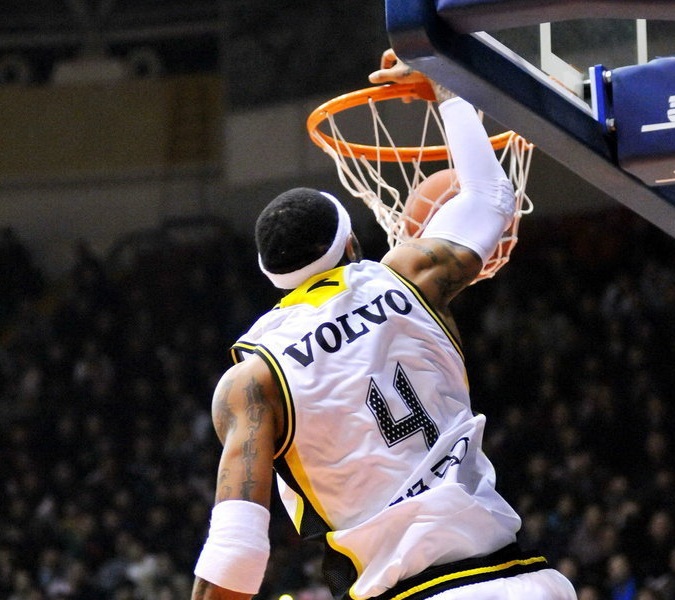 Those of you who have been following my CBA reports already know that Kenyon Martin has been a disappointment for the Xinjiang Flying Tigers thus far.  According to a report by ESPN’s Marc Stein, the team is strongly considering parting ways with the underacheiving power forward.  As a matter of fact, the article states that only serious sanctions threatened by the CBA have “stopped Xinjiang from making the move already.”  Via ESPN…

The Xinjiang Flying Tigers in China are giving strong consideration to releasing star forward Kenyon Martin, according to sources close to the situation.

If Xinjiang goes through with the move, it would be the test case for established NBA players who signed in China during the lockout to possibly return to the NBA sooner than expected.

Sources told ESPN.com that only the threat of serious sanctions from Chinese league officials for releasing a player of Martin’s stature in-season, including the potential forfeiture of games, has stopped Xinjiang from making the move already.

Based on new rules instituted for this season in China, teams there were told that they could only sign NBA free agents and could not grant out clauses to those players to come back to the States in the event of the lockout ending. For the high-profile American signees — Martin, Wilson Chandler, J.R. Smith and Aaron Brooks — that meant they were committing to staying through the end of the Chinese Basketball Association season in March before having the freedom to sign a new NBA deal.

Chinese teams were likewise threatened by serious sanctions, including forfeiture of games, if they opted to release a player in-season like sources say Xinjiang wants to do with Martin now. But sources say Xinjiang is sufficiently frustrated with the team’s slow start and is willing to test the rule and let him go.

If waived, Martin would still need to secure a FIBA letter of clearance from Xinjiang before he could join an NBA team, but there is a belief in Chinese basketball circles that the first release of an NBA player such as Martin could open the door to the returns of Chandler, Smith and Brooks as well.

It’s widely assumed around the NBA that Martin, Chandler, Smith and Brooks are all eager to get back to the States as soon as possible.

Xinjiang has the biggest budget in China even after signing Martin and recently bought former Portland Trail Blazers guard Patty Mills out of a deal in his native Australia to replace the injured Quincy Douby, a former first-round pick of the Sacramento Kings. Xinjiang is also one of the Chinese teams that negotiated with Los Angeles Lakers star Kobe Bryant earlier this summer.

It was initially thought that Xinjiang management, desperate to win a CBA championship this season, would be the last Chinese team to release its NBA import, but sources say that the Flying Tigers are pondering roster shakeups after a sluggish start to the season.

This certainly doesn’t strike me as any sort of surprise.  Kenyon is averaging 14 points and 9.7 rebounds in 11 appearances, which, on his standards, would be great numbers in the NBA, but is certainly not what Xinjiang was looking for in a league where Josh Boone is an imposing presence in the paint.  When they inked Kenyon Martin to a $3 million deal they expected him to be a threat on offense and a monster on defense… and he has been neither.  I’ve watched a good portion of his games and he doesn’t look like the guy from the Denver Nuggets, let alone the New Jersey Nets.  He doesn’t move without the ball, crash the offensive glass, or patrol the paint on defense.  What he does do is take an average of one three-pointer a game, and he’s bricked every single one of ‘em.  It’s not just the numbers, either; it’s the wins and losses.  Eight and four doesn’t seem so bad, but consider the fact that Xinjiang lost one regular season game all of last season.  They came into ’11/12 feeling like it was championship or bust, and right now they feel that it’s going to be bust with K-Mart.

To sum all of that up, as the ESPN article points out, Xinjiang is certainly willing to write a big check or two, but they didn’t make Martin the highest-paid player in league history to miss jumpers and help quadruple last season’s loss total just weeks into the season.  So, despite his big-name status, I’m not at all surprised that they’d like to end the expiriment and send him on his way.  The problem?  It seems that the league doesn’t want him gone… so much so that they’ve threatened to make Xinjiang forfeit games if they do cut Martin loose.

I’m not exactly sure how the league can do that, but apparently they can.  I know all of the American players have no out clauses in their deals, but I never knew a team wouldn’t be allowed to waive their star import in the case that they were genuinely dissatisfied.  ESPN’s article states the following…

Chinese teams were likewise threatened by serious sanctions, including forfeiture of games, if they opted to release a player in-season like sources say Xinjiang wants to do with Martin now.

…but as far as I can tell there’s no rule in the CBA against waiving players at any time for any reason at all; it happens on a regular basis.  Gerald Green, Dan Gadzuric, Earl Clark, and others have already been sent packing this season alone.  Clark’s release was a mutual agreement, and Gadzuric’s was due to injury, but Green was simply let go out of the blue because his team (Foshan) wasn’t satisfied with his play (and he was putting up much better individual numbers than Martin is).  The same thing happened to former Cleveland Cavalier Dwayne Jones, who was a teammate of Wilson Chandler at the beginning of the season.  I’m not sure what part of Kenyon’s contract makes it any different to release him than it was for other teams to release one of their American players… but it all seems pretty sketchy, and like it could be based simply on what the league feels is best for it’s product.  If Jilin was to waive Cartier Martin tomorrow would they be threatened in this manner?  I have a funny feeling they wouldn’t, yet I don’t see the difference.  Kenyon just has a bigger name and plays for a more notable team.

Anyway, talk of Kenyon’s potential release has brought about some speculation that it could open the floodgates for all of the other big-name NBAers to their way back to the NBA.  This I do not see happening.  The only reason there’s any talk of Kenyon’s release is beacuse he isn’t playing well.  JR Smith, Wilson Chandler, and Aaron Brooks are all earning their money.  Smith puts on a show every time he plays, Brooks has Guangdong in second place, and Wilson Chandler has put up some ridiculous statistics.  None of them appear to be at all disgruntled and their teams seem pleased with them, so regardless of what happens with Martin I wouldn’t expect to see any of those three back in the States until their CBA seasons have come to a close (sometime in March or April).

If Martin is waived he could be a guy who could give a big boost to a contending team, but it’s too early to talk about that.  He still needs to be let go and get FIBA clearance to sign a new deal.  I’m not saying it won’t happen, but if the CBA really plans to force Xinjiang to forfeit games then I’m thinking they keep him.

2 Responses to Will The Xinjiang Flying Tigers Waive Kenyon Martin?