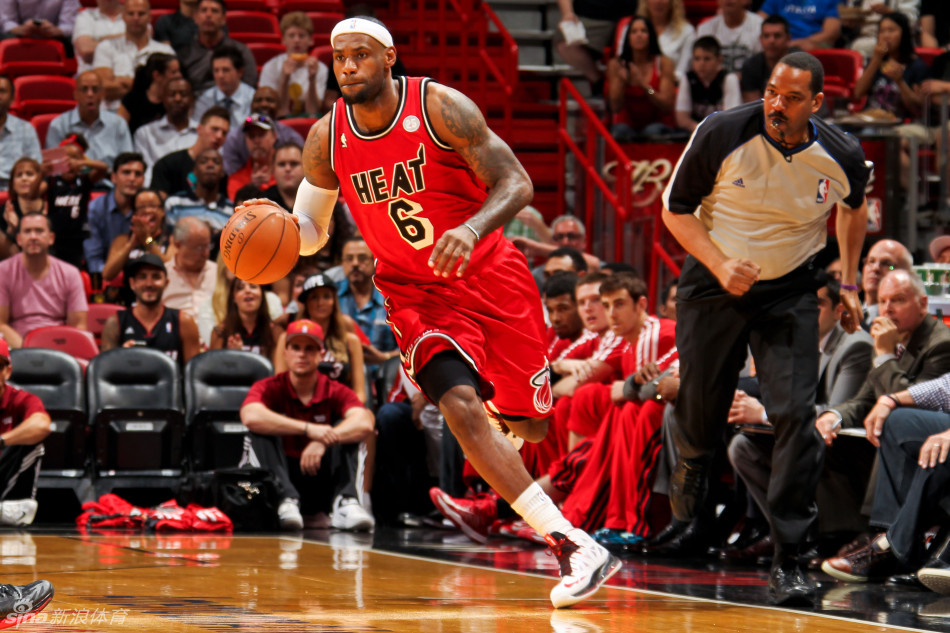 By scoring 30 points on 11-15 from the floor in a 117-104 victory over the Blazers, LeBron James established a new standard for individual efficiency in NBA basketball.  As you’ve probably heard, this was LeBron’s sixth consecutive game of 30+ points on 60+ percent from the floor.  Never before — not in the entire 67-year history of the National Basketball Association — has anyone been able to sustain such a scoring streak.  Not Michael, not Wilt, not Shaquille, not Kobe (let that sink in for a moment).  Never in my lifetime have I seen anyone play this sport at the level that LeBron James is playing it at this very moment.  That’s the only way I can put into words what he is doing.  Below are his highlights from Tuesday’s game as well as links to his complete highlights from the other five games composing the historic streak.

Fun Fact: This Heat victory was the 1,000th in their regular-season history.

Kobe Bryant appeared to have a predetermined agenda against the Suns, and that agenda did not involve shooting the basketball.  Bryant was shot-less with six assists and four turnovers at halftime, and though the Lakers led the Suns at that point… it hadn’t exactly been pretty.  Clearly, Bryant was forcing the issue as far as the passing.  Even when the Suns began to play him for the pass he refused to take a shot.  He turned down layups to dish off to Antawn Jamison and tried to toss lobs when he should’ve completed the play on his own.  He was out there lookin’ like Brandon Jennings trying to set the assist record in the McDonald’s All-American game, and the Lakers weren’t better for it.  They did manage to beat the Suns 91-85, but it required a 26-14 fourth quarter.  Bryant finished 1-8 with 4 points, 9 assists, and 8 turnovers.

The Suns dug their own grave in this one by ceding nine offensive rebounds in that aforementioned fourth quarter.  Give the Lakers credit, though — Antawn Jamison (19/10) and Dwight Howard (19/18) made concentrated efforts to crash the boards, and their hard work led directly to the Lakers’ 10 second-chance points, without which they wouldn’t have won.  The Lakers actually came up with three offensive rebounds on one possession before Kobe scored his first bucket, a layup around the two-minute mark, that essentially iced the game by putting LA up eight.

For Rudy Gay, all of those big-time shots that weren’t falling in Memphis have been falling in Toronto. His overall floor percentage is only marginally improved (went just 6-14 for 17 points vs Denver), but he’s suddenly batting 1.000 on game-winning jumpers. Teams may want to consider forcing Rudy to his left; he seems to feel quite comfortable taking a few dribbles to his right and pulling up along the baseline.

Ty Lawson had himself another huge night. As he did in Boston, Lawson finished with 29 points and 9 assists, except he did it in regulation this time.  Lawson’s penetration was the key to Denver’s offensive success (108 points, 70 in the paint, 52% from the floor) without Gallinari, Chandler, Iguodala, and McGee (played just five minutes); he scored seven (or possibly eight… ESPN’s shot charts never seem right) of his 12 field goals in the key as he used his strength to ward off defenders during impressive forays to the rack.  He missed a potential game-winner at the buzzer, but he had to shoot it more quickly than he wanted to due to a botched handoff from Anthony Randolph.

Speaking of Anthony Randolph, he had a season-high 16 points on 6-13 from the floor.  Randolph, along with Jordan Hamilton, Evan Fournier, and Timofey Mozgov, played significant minutes due to the various Nugget injuries.  He played very hard and reasonably well at the offensive end, but Denver’s defense certainly suffered without many of their rotation regulars.

John Lucas III made four three-pointers in the fourth quarter. He’s 9-11 from three in his last two games.

Kevin Durant really seems to be taking this “not nice” campaign to heart. Late in the fourth quarter of OKC’s 109-94 loss to Utah, Durant dropped his shoulder into a driving Alec Burks, resulting in the first flagrant foul of his six-year career.  Time for a neck tatt, Kevin!  In fairness, Durant had reason to be frustrated.  He dropped 33 points on just 16 shots, but his fellow frontcourtsmen were destroyed by the bigs of the Jazz.  Led by Al Jefferson, who had another outstanding game with 23 points and 7 boards, Utah’s four-man PF/C rotation gave Kendrick Perkins and Serg Abaka (he ain’t ’bout dis Salt Lake life) a combined 58 and 25.

For the lulz, watch Perkins complain about being cited for an elbow that even Dikembe Mutombo would’ve acknowledged:

Highlight Recap, Tyreke Evans Edition: I miss those days when ‘Reke was a 20-5-5 player.  We deserve more of this…