Charlie Villanueva Beats The Bucks With A Three-Point Dagger 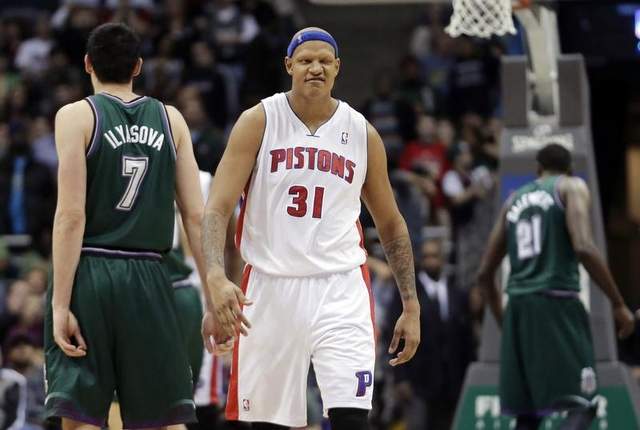 Back in the summer of ’05, Charlie Villanueva was selected seventh overall by the Toronto Raptors.  A versatile combo forward out of UConn, Villanueva was brought north of the border to join budding superstar Chris Bosh in a promising frontcourt for the future.  Though Charlie got off to a pretty solid start averaging 13 points per game on 46% from the floor and 33% from downtown, his first season in Toronto would be his last.  Just 36 starts into the then-22-year-old’s professional career, the Raptors shipped him to Milwaukee for TJ Ford and cash considerations.  The deal worked out similarly for both teams — Villanueva had one good season as a Buck, but he butted heads with coach Scott Skiles and ultimately left to capitalize on his strong play in free agency.  TJ Ford was a serviceable starting point guard for a couple of decent Raptor squads, but he was often injured and eventually shipped off to Indiana in exchange for the ghost of Jermaine O’Neal.

TJ Ford’s replacement was a young Spaniard by the name of Jose Calderon.  Ford had been sharing time with Calderon prior to being dealt, and it was Calderon’s impressive play that made Ford expendable.  In just his third season, Jose became a member of the exclusive 50/40/90 shooting club, finished fourth in the league in assists, and set an all-time NBA record by making 98.1% of his free throws.  That was in 2008.  Two weeks ago, Calderon was still running the point for the Raptors.  Having played more games for the franchise than anyone other Morris Peterson, Calderon finally left the Raptors as the primary piece in the deal that landed them Rudy Gay.  To say the least, Calderon proved himself a valuable asset over his seven and a half seasons in Toronto.  Though he was never drafted, he’s blossomed into the best player of the Raptors’ ’05 rookie class — coincidentally, the same one that spawned the aforementioned Charlie Villanueva.

And that brings us back to the present, in which Villanueva and Calderon are teammates once again.  This time, they’re Detroit Pistons.  Though their respective contract situations will likely break them up at season’s end, the two are making the most of their little reunion.  On Saturday night in Milwaukee, in their fourth game together as Pistons, Charlie and Jose combined to score 41 points on a remarkable 17-26 from the floor.  The two connected on seven three-pointers, including the one that won the game.

Note that Villanueva was working under the added pressure of a dwindling shot clock.  Considering the anxiety and emotion associated with playing against a former team, that’s one hell of a cold-blooded triple.  Though it came as something of a surprise from a guy who plays just 16 minutes a game, the Bucks should’ve known better than to leave their former friend, as he happens to be shooting an impressive 38% from beyond the arc this season.  It’s not like he hadn’t been a factor all game long, either; CV was already 3-6 from three and finished with an 18-point, 13-rebound double-double.

As I took this game in, I had forgotten all about the mutual NBA beginnings of Villanueva and Calderon.  Not until afterwards, when the two exchanged some friendly tweets, did I put two and two together.

So this is kind of fun, right?  With 39 points in his last two games, Charlie may be in for an increase in playing time.  As for Jose, he’s off to a fine start in Detroit, averaging 13 and 7 on 60% from the floor.  For what it’s worth, I find the Pistons to be one of the most watchable of the league’s lottery teams.  Sucks that Drummond is out four to six weeks, though.