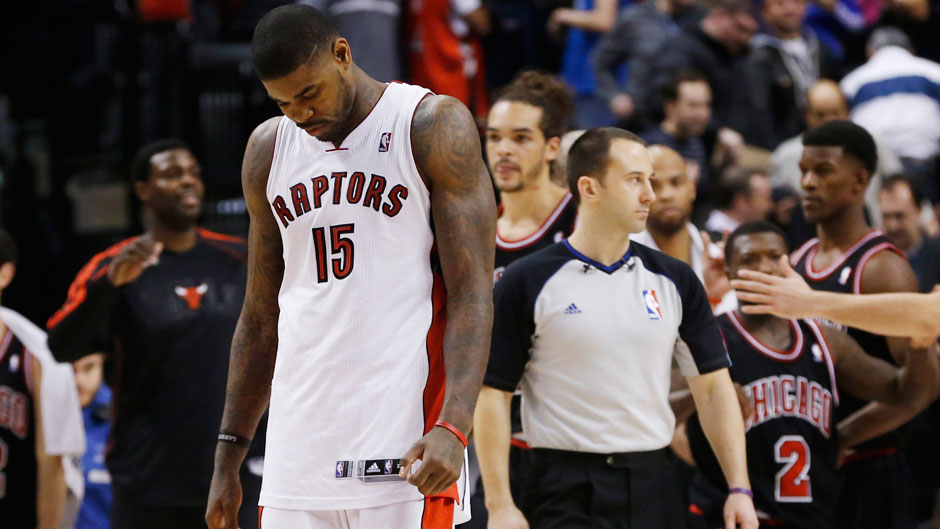 Currently on a four-game losing streak, the Toronto Raptors have suffered their share of painful defeats this season.  With overtime losses to the Bulls and Sixers on Wednesday and Friday, the Raptors have fallen to just 1-4 in overtime and 2-5 in non-overtime games decided by five points or less.  A poor record in close games — it’s a classic indicator of a bad team, and at 14-26 the Raptors are indeed a pretty bad team.  Maybe not quite as bad as their record indicates, however.

With one second left in overtime of Wednesday’s aforementioned loss to the Bulls, Amir Johnson put the ball on the floor and drove to the rack.  With the Raptors down just two, Johnson was hit on the arm by a reaching Joakim Noah as he ducked into the paint.  Wisely, Johnson made an obvious shot attempt as he fell to the floor.  His awkward floater came up a foot or two short, but that didn’t matter — Johnson would be headed to the foul line with an opportunity to tie the game and force a second overtime period.

Except Johnson never went to the free throw line.  Instead, the Raptors were given the ball out of bounds and Jose Calderon proceeded to brick a rushed three-pointer.  Considering that he had just one second to work with, Calderon did get a pretty nice look for the win… but I’m sure the Raptors would’ve preferred to take their chances on a pair of uncontested 15-footers.  Yesterday, the NBA acknowledged that they should’ve been given the opportunity to do so.  Via NBA.COM…

With one second remaining in overtime of the Chicago Bulls-Toronto Raptors game on January 16, officials called a foul on Chicago’s Joakim Noah as Toronto’s Amir Johnson gathered the ball while driving to the basket. The officials ruled the foul was on the floor but upon review at the league office, the video replay confirmed that the foul should have been called a shooting foul with Johnson receiving two free throws.

Now, this admission of wrongfulness from the league doesn’t necessarily mean the Raptors would’ve won the game even if the correct decision had been made by the officials.  Johnson, a 70% free-throw shooter, obviously would’ve needed to make both, and then the Raptors would’ve had to win the second overtime.  Neither occurrence is a given.  However, an obvious error was made and it cost the Raptors a fighting chance, if nothing else.  Clearly, that’s discouraging… especially when you consider the league’s admission of another crucial mistake in Toronto’s one-point loss to Charlotte on November 21st.  Via InsideHoops.com…

Too little, too late.

The NBA admitted on Thursday to missing a foul on the decisive play of Toronto’s loss to the Bobcats a day earlier.

“On the final possession of Charlotte’s 98-97 win over Toronto on Nov. 21, the game officials missed a foul by Charlotte’s Michael Kidd-Gilchrist against Toronto’s Andrea Bargnani on a jump shot. Bargnani should have been given two free throws and the clock stopped with approximately 2.4 seconds remaining in the game,” read the missive at NBA.com.

Credit the league for admitting the error, but it won’t do much for the Raptors.

At this point, Toronto must be feeling a little snakebit.  Officials will inevitably make mistakes against each and every team over the course of this 82-game marathon, but it’s unusual to see a team receive two acknowledgments of such crucial wrongdoing from the league office in a single season.  Unfortunately for the Raptors, a third could be on its way.

With eight seconds to go in the fourth quarter of Friday night’s game, Alan Anderson knocked down a pair of free throws to give his Raptors a four-point lead over the Sixers.  Spencer Hawes answered quickly with a two-point score, but all Toronto had to do was inbound the ball and make another couple free throws.  Had they done so, victory would’ve been all but assured.  Instead, they went on to lose in overtime.  With just five seconds left, the Sixers were able to get the ball back and score a layup to tie the game at 96.  The bucket was legit, but the “bad pass” that resulted in a Toronto turnover was more of a blatant pushing foul on Nick Young.

To be honest, it never should’ve come to this.  The Raptors had a 17-point halftime lead which they squandered by being outscored 29-13 in the third quarter.  However, they did bounce back to score 23 in the fourth, and I don’t think it was Alan Anderson’s intent to walk out of bounds and fall on the floor with five seconds left and his team up two.

To the Raptors’ credit, they seem to have focused all of their postgame reflection on the blown lead.  That’s probably a good plan, as it appears that they’re going to have to maintain big cushions throughout crunch time if they ever want to snap this losing streak.

One Response to League Admits Raptors Got Screwed, Screws Them Again