Posted on November 9, 2012 by Stephen Coston 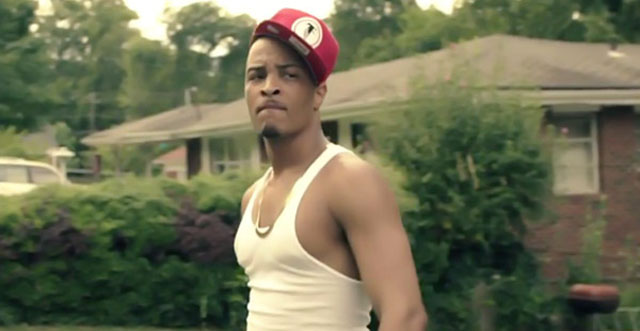 Everyone, there’s been a change of plans: forget everything I said in this week’s “Games To Watch” post and tune in to Fox Sports South to watch the Heat take on the Hawks at 7:30 Eastern tonight.  Not because it’s going to be a good game (the way Miami has been playing lately, it’s kind of doubtful), but because Atlanta (t)rapper T.I. will be taking Dominique Wilkins’ place next to Bob Rathbun for the first half.  Yes, a rapper is going to call 24 minutes of an actual NBA game on your television.  Via FoxSportsSouth.com…

During his debut, T.I. will participate in live game day coverage on SportSouth during the first two quarters of the Atlanta Hawks vs. Miami Heat game airing at 7:30 p.m.

In reality, this will be nothing like you and I hope it will be.  T.I. is 32 years old now, has one of those really bad TV shows on VH1, and apparently writes novels.  So, unfortunately, the odds that The Rubber Band Man shows up in a 3XL Dominique Wilkins throwback and frequently uses the word “shawty” are pretty low.  However, that doesn’t change the fact that a man who once rapped, “money, hoes, cars and clothes, that’s how all my #!@&%$ roll,” will be calling an NBA game tonight.  To me, that’s reason enough to check this out.