In Memory Of Mickael Gelabale’s Dreadlocks 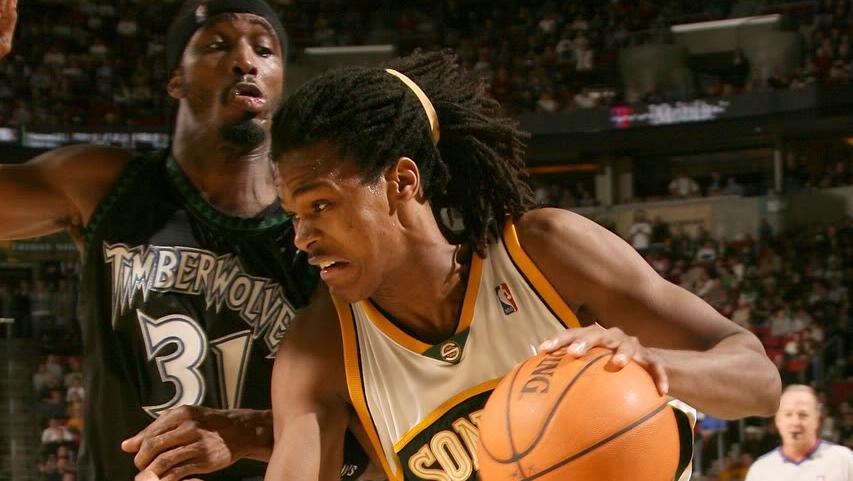 When watching the Olympic basketball tournament one of my most frequent exclamations is always something along the lines of “hey, I remember that guy!”

This year especially, what with the record number of participants with NBA experience, it’s been exciting to catch up with all of the former second-round picks, Summer League All-Stars, and other interesting characters who have made their way to London since enjoying a cup of coffee in the NBA.

This morning, whilst observing highlights of France vs Nigeria, I happened across a video of former Supersonic Mickael Gelabale assisting current Wizard Kevin Seraphin on a one-handed slam dunk.  A fairly impressive play by the 48th overall selection of the 2005 NBA draft, but neither the ball fake nor the wrap-around dish were what really piqued my interest.  As a matter of fact, what I couldn’t help but notice here had nothing to do with basketball at all—it was the absence of Gelabale’s dreadlocks, which once put those of Lil Jon (this was before Waka Flocka, kids) to shame.

Those who stayed up late to watch the second round of the 2005 NBA Draft (featuring Deputy Commissioner Adam Silver!) know.  Gelabale, who stuck around for his handshake and photo op, stormed the stage with hair so massive his Supersonics cap was forced to rest comically atop the pile of dreads.

It was a memorable balancing act by the hat, and an unforgettable moment in draft fashion history; exactly the type of thing that turns commentators into comedians and keeps diehard fans like me happily tuned in through the final couple of picks.

I guess that’s all.  With Gelabale’s remarkable dreads having gone the way of his 109-game NBA career it simply felt necessary to celebrate their legend.  Even if they didn’t leave you with such a lasting impression (or if you didn’t bother with the second round of the ’05 draft/the Supersonics circa ’05-’07) I think it’s clear that these dreads were of the epic variety.  In all seriousness, I’m not sure I’ve ever seen an object so large and unruly attached to any man’s head.

And here’s Gelabale jumping over a Sonics cheerleader, because that was his role.

One Response to In Memory Of Mickael Gelabale’s Dreadlocks