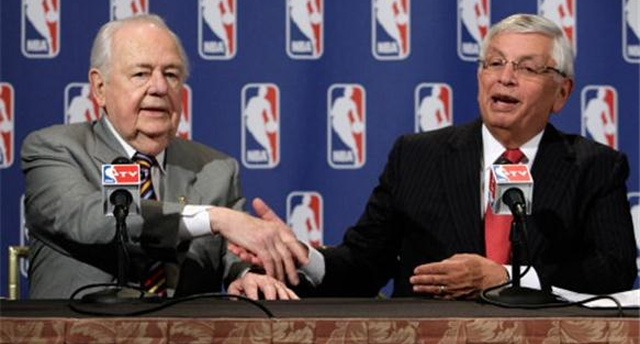 Break up the New Orleans Hornets! They’ve got a new owner (Tom Benson, the same guy who owns the Saints) AND their fourth win in six games.  As the Hornets beat the Jazz 96-85, Eric Gordon showed anyone who was watching why I called him the third-best shooting guard in the league coming into the ’11/12 season.  EJ repeatedly broke down the defense and passed the ball to open teammates (6 assists), and he basically put an end to Utah’s season with an individual 8-0 run that made it a 12-point game with two minutes to play.  Gordon finished with 25 on 11-18, but his impact on the game–particularly on the final six minutes–was much bigger than 25 points make it out to be.  Utah was trying to double him but he kept splitting the defenders, resulting in easy looks for both he and his teammates.  He simply took complete control of a one-point game and turned it into a double-digit victory.  Assuming he re-signs with the Hornets in the summer and stays healthy next season Gordon is going to open the eyes of a lot of fans and analysts.  His off-the-dribble game is fierce, he makes love to the pressure, and he even plays stellar defense.  Scorer, shooter, defender, facilitator… EJ is all of those things.

Did you click the link about New Orleans’ new owner? Yeah, he’s interested in a team name change.  I hope he reconsiders because Hugo The Hornet is my favorite mascot of all-time.

Gerald Green scored a game-high 23 points that included a dagger of a three-pointer as the Nets rolled into Philly and delivered the latest blow to the floundering Sixers (95-89).  I’d elaborate on Green’s performance, but 20-something points and a big shot has become his standard outing.  Seriously, he’s averaging 17 PPG in the month of April, during which the Nets have gone 3-3.  Green actually drew a double team in the high post midway through the second quarter, before he’d even made a basket.  It seems that he’s gotten the attention of his opponents.

Along with Green, Marshon Brooks, Kris Humphries, and second-round draft pick Jordan Williams excelled in this one.  Hump and Williams dominated the paint, collectively finishing with 31 and 18 while Elton Brand, Spencer Hawes, and Nikola Vucevic produced next to nothing.  Humphries’ game is essentially hustle, and he simply made Brand look old and slow.  As for Brooks, he was the game’s second-leading scorer with 22.  He did his best to fill in at back-up point guard, and although the job he did made me appreciate subtle contributors who simply get their team into the offense, Brooks did do an excellent job of bailing his team out when there was nothing doing and they simply needed a bucket.

I could go on and on about what a disappointing loss this was for the Sixers (they’ve fallen to 8th place due to a lost tie-breaker with the Knicks), but I don’t want to take away from what the Nets did.  Philly didn’t hand this to them.  New Jersey first had to bounce back from a rough second-quarter stretch during which they failed to score for what seemed like forever, then worked through rough patches every time Deron Williams took a seat.  Although Williams had an underwhelming performance statistically he’s the only non-D-League PG they’ve got, and when he leaves the floor guys like Brooks and Green are asked to manufacture offense.  They manufactured more than enough to get the Nets a win last night.  It was really anything but a simple choke-job from the Sixers; New Jersey scored on five of their last six possessions as they posted a 32-point fourth quarter.

On April 1st the Wizards fielded their youngest starting lineup in franchise history. They’ve stuck with the lineup–which consists of John Wall, Jordan Crawford, Chris Singleton, Jan Vesely, and Kevin Seraphin–for seven games and averaged 97.7 points per game with it.  Unfortunately, game number eight didn’t go so well.  The Wizards strolled into Madison Square Garden winners of two in a row, but things started off bad and finished… well, nearly as bad.  Washington scored just 13 points in the first quarter, then fell behind by 19 as they failed to make a basket in the first 4:40 of the second.  They actually went on to score 20 in that second quarter, making it their best of the game.  An 18-point third quarter followed by a 14-point fourth quarter resulted in a total of 65 points and a 38-point loss.  The Wiz shot 27.8% from the floor, 20% from three, and committed 21 turnovers to just 13 assists.  The Knicks didn’t post any eye-popping offensive numbers, but JR Smith’s 23 off the bench certainly stand out.  Mike Woodson continues to tell the media he’s got confidence in his streaky shooter, and that confidence is paying dividends right now.  You may recall that Smith hit the go-ahead three-pointer in the huge win over Milwaukee.

Led by Dexter Pittman and his 16 points, the Miami Heat bench dropped 46 on the Bobcats in a 105-82 victory.  I think the Heat desperately needed a game like this (read: a game against the Bobcats) just to get themselves out of the spotlight for a minute.  LeBron James and Chris Bosh both played well in limited stints and the role players were able to get the job done.  Miami will be back in everyone’s living rooms on Sunday as they play the Knicks on National TV.  Erik Spoelstra has insisted that all his team needs is one signature win to get back on track.  Coming off of an easy victory over the Bobcats and a much-needed day off… the table is set for that signature W.  I’m in agreement with Spoelstra here… I think a triumph at Madison Square could do a lot for the Heat.  They just need something to feel good about right now.

I think fatigue finally caught up with the Boston Celtics. After traveling up and down the map and beating quality teams like the Heat and the Hawks, the Cs hit the road for Toronto… where they shot 37% and failed to reach the 80-point mark for the first time since March 19th.  All of the big guns struggled (Pierce 6-15, Garnett 5-16, Rondo 3-7), Ray Allen sat out, and the bench produced next to nothing.  Still, Paul Pierce had a shot to tie the game with 20 seconds left.  It was way off–as were 15 of the 19 threes the Celtics took–but he had a shot.  The fact that they even got such a shot after playing so poorly… I’m not sure if that says more about their persistence or Toronto’s D-League-ness (The Raptors are missing the majority of their lineup).  Rajon Rondo’s double-digit assist streak does (miraculously) continue.  Rondo assisted on 12 of 30 Boston field goals to extend his run to 20 games.

I checked in on the Hawks and Magic last night and was disappointed to find Ivan Johnson MIA. Turns out he’s been fined for conduct detrimental to the team… conduct that also earned him a one-game suspension.  Johnson, a surprising 27-year-old rookie who’s past is full of similar troubles, had been able to keep his attitude in check to this point.  Hopefully ATL’s 109-81 victory over the Howard-less Magic will help Ivan and the Hawks move on (Johnson’s contract has a team option for next season).  Speaking of the Magic, they’ve slipped into sixth place, and it’s possible (although not likely; they’re three games up on the Knicks) that they could slide further.  Dwight Howard is out indefinitelty with back problems, meaning Orlando will be playing sub-.500 basketball for the time being.

Denver finished with a 21-13 advantage on the fast break, but the Lakers beat them 2-0 on the slow break as they took it 103-97.  Denver played a respectable game… they simply don’t have the size to compete with the Lakers (that’s always been the problem).  With Kobe sitting out the Lakers repeatedly went to Andrew Bynum, who delivered a game-high 30 points.  Paul Gasol contributed 14/10/6 and Matt Barnes exploded for 24/10 off the bench.  Andrew Bynum has now had 30 of something in two straight games.  The Lakers are 3-1 without Kobe Bryant and 1-0 without Mike Brown (missed last night’s game for personal reasons).

Box Score Observations: That Sacramento arena deal has fallen apart, as have the Kings.  DeMarcus Cousins and company lost their seventh straight, this one to the Thunder (89-115).  Kevin Durant went for 29 and 9.  Brandan Wright had another good game (13/8/3 BLK) as the Mavericks edged the Blazers 97-94.  Marcus Camby had 14 points, 18 rebounds, 4 assists, 2 steals, and 3 blocks, but the Rockets lost an important game to the Suns, 112-105.  Houston and Denver are now tied for 8th, leading the Suns by a single game.  The Bucks kept their season alive by beating Detroit 113-97.  Drew Gooden exploded for 26/5/8.  Brandon Knight posted 25/5/8 for the Pistons.  The Pacers beat the Cavs 102-83 in a game that featured no individual line worth reporting.

Highlight Recap: One of Rajon Rondo’s 12 assists resulted in this Avery Bradley alley-oop dunk.  Durant and Westbrook one-up Rondo and Bradley.  MarShon Brooks plays a little defense.  Serge Ibaka does what he does.  And my personal favorite, the killer cross from Jameer Nelson…

Ankles fear Jameer Nelson.  He’s fallen off drastically since his All-Star campaign, but he’s still got a nasty crossover.