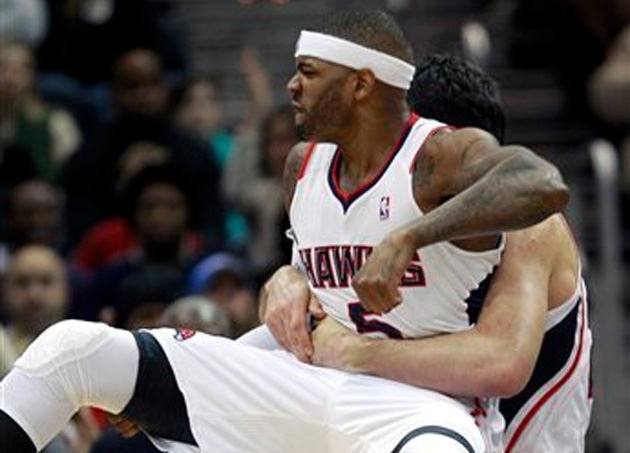 Josh Smith had an interesting game last night. I’m sure you’ve already seen what he did to Serge Ibaka, and heard that he scored 30 points and grabbed 12 rebounds as the Hawks upset the Thunder without the services of Joe Johnson or Al Horford.  Did you notice his 5 turnovers, one of which came with 42 seconds left, and the six jump shots that he missed, though?  It’s funny, because the Hawks absolutely DO NOT win this game without Josh Smith making the plays he made.  He was responsible for 13 of Atlanta’s 21 fourth-quarter points, as well as their last four rebounds of the game.  Hell, Smith was actually the only Hawk to make a damn basket in the final six minutes.  What if the Thunder had connected on two or three of the five shots they missed consecutively in the last minute and 30 seconds, though?  Well, in that case, Josh Smith puts in an excellent late-game effort, but his repeated failure to give the ball to a guard in transition (did this at least four times, resulting in turnovers or bad shots) is a big reason why the Hawks lose the game, and his shot selection once again comes into question.  I suppose you roll with the punches when forced to rely so heavily on Josh Smith to… basically do everything, and in this particular game it worked out swimmingly.  However, this is why Smith can be so frustrating at times.  Even in what was probably his best game of the year he made no fewer that seven or eight decisions that were downright poor.  Anyway, I’m done criticizing Josh Smith today… clearly, the positives easily outweighed the negatives last night.  He was an animal in the last few minutes.

Ivan Johnson is a man of few words, but he’s an excellent interview.  He has an impeccable way of making points in a very concise fashion.  Basically, his answer to everything is something along the lines of “hard work.”  Then he looks at the reporter like he’s gonna f@ck him up if he asks another question.  I think Ivan has officially become my favorite halftime/postgame interview subject.  That bumps Tony Allen into second place.

I love watching Hawks home games because I feel like I’ve traveled backwards in time… maybe about six or seven years.  Next time you get a chance, take a look at the fans at Phillips Arena.  As you scan the crowd, take note of the surprising abundance of all-over print, oversized fitteds, and baseball jackets.  It’s like ’06 in there.

Down three, six seconds left… what do the Cleveland Cavaliers do?  Run a play to free up Anthony Parker, of course.  It’s not like that Kyrie Irving guy has proven to be a pretty clutch player or anything.  It’s not like his ball-handling capabilities may allow him to get a better look than Anthony Parker with six seconds to work with.  Nah, it’s not like that at all.  Seriously though, for the first time since LeBron left Cleveland has a player who’s worth a sh!t in late-game situations, and they still run the old Anthony-Parker-for-three play.  Why?  F@cking Parker can’t dribble, rendering him completely useless unless there’s not a soul within 15 or 20 feet when he catches the ball.

Funny moment from Cavs/Wizards: Shelvin Mack drives baseline and attempts a crazy one-handed dunk over a couple of Cavaliers.  I’m not sure if he just missed it or if the ball got deflected, but it was a pretty impressive take either way.  Says Austin Carr, massive Cavs homer: “This is the pros, baby!  Maybe in college, blah blah blah.”  Before Carr even has time to wrap up his drivel, Tristan Thompson attempts a basic two-handed slam… and gets stuffed from behind by Jan Vessely.  Carr didn’t speak for the next three possessions.

Kevin Love’s 42 points and 10 rebounds are a good indication of how thoroughly he dominated the Blazers for all 43 minutes and 17 seconds he spent on the court.  Love became extra ruthless, though, after Joel Pryzbilla decided it would be a good idea to make some sort of statement.  Seeing as Portland was losing and Pryz was being tooled on, I’m not sure exactly what the statement meant… but with nine minutes left he knocked Love on the floor and stepped over him Iverson-Lue style.  Love made the technical freethrow… then dunked in Przybilla’s face… then scored again… and the Blazers got blown out, 122-110.  Przybilla finished with 3 points and 6 rebounds.  Normally I’m an advocate of the edge that Pryz brings, but this was just stupid as sh!t.  The Blazers were within six when it happened and trailed by 13 about a minute later.  Stay in your lane, Przybilla.  Kevin Love isn’t afraid or you.

Remember how Lamar Odom was going to play in the D-League? Well, apparently there was a change of plans.  Odom returned directly to the Mavericks after missing the previous four games for personal reasons, but Dirk didn’t bother to pass him the ball.  As a matter of fact, Dirk didn’t pass anyone the ball… I’m not mad at him, though.  Nowitzki finished the game with 0 assists, but he had 40 points in a 102-96 W over the Jazz.

Can anyone tell me why the back of his jersey says “Sabonis?”

“During our relationship, Mr. Sterling consulted me on issues he was considering almost every day including, among others, whether he should hire Alvin Gentry to coach the Los Angeles Clippers (although I had no experience in such matters), how he should respond to requests by players for the Los Angeles Clippers for increases in their compensation (Mr. Sterling and I often had dinner at the Arena Club with agents for a number of players),” said Castro.

In 2003, Sterling described Alexandra Castro under oath as .. “.. a prostitute … she was a total freak and a piece of trash.”

Later in the same deposition, Sterling elaborated on the nature of their relationship.

Box Score Observations: Dwight Howard scored 28 points and grabbed 14 rebounds as Orlando beat Milwaukee.  The Magic and Bucks have played 4 times in less than a month, with Orlando winning all four contests.  Pwnage.  The Pacers are on a six-game winning streak… they beat the Hornets by a lot.  David West had 14/13 in his return to the Hive.  Seven different Grizzlies scored in double figures as Memphis pulled away late and beat Detroit 100-83.  OJ Mayo hit what was essentially the early dagger from about four or five feet behind the three-point line.