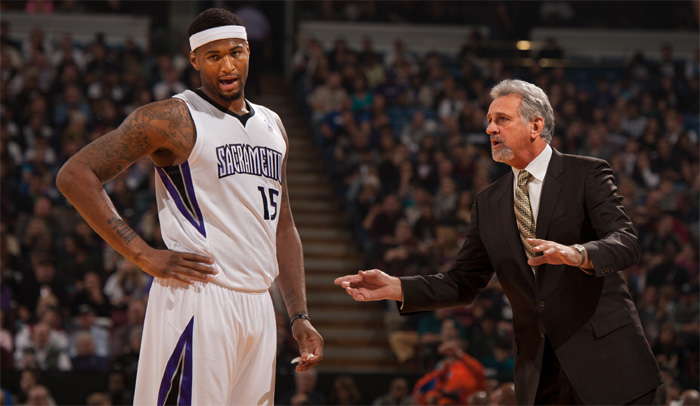 The Sacramento Kings have decided to fire coach Paul Westphal after a turbulent 2-5 start.  The Kings won their first game of the season, an upset over the Lakers, but just about everything has gone wrong from that point on.  Westphal had been unable to get his young Kings team to buy into his system, and DeMarcus Cousins had to be asked to stay away from a home game against New Orleans after making a public complaint about the coach’s offense.  Aside from the aforementioned victory over the rival Lakers, the entire season has been an utter disaster that calls for major changes.  Via CBSsports.com…

The Sacramento Kings announced the firing of head coach Paul Westphal Thursday, according to a release from the team.

“I want to thank Paul for all of his effort on behalf of the Kings,” said general manager Geoff Petrie. “Unfortunately, the overall performance level of the team has not approached what we felt was reasonable to expect. I wish him the best in his future endeavors.”

Assistant Keith Smart, who was the head coach of the Warriors last season, will take over interim duties for the Kings.

This is a move that had to be made because Westphal had completely lost control of this youthful team.  That being said, I don’t think a coaching change will bring about any drastic improvements.  The Kings are bottom three in a variety of offensive and defensive categories including assists, points allowed, and opponent field goal percentage.  Last night they lost by 27 in Denver despite 25 turnovers by the Nuggets, not to mention the absense of Nene.  Their 16 assists to 16 turnovers and 2-21 three-point shooting speak volumes about the major issues that Keith Smart will be trying to fix.  This is a team full of me-first players who don’t seem to understand the importance of sharing the basketball.  Their attitude is all wrong, and that problem starts with prized center DeMarcus Cousins.

Rather than take any responsibility for Sacramento’s poor play this season, Cousins has elected to place the blame squarely on his coach.  After a loss to the Knicks, DeMarcus told reporters that he and the other struggling Kings players were simply “doing what coach say[s].”  While this clearly wasn’t the case–as I’m sure Kings management is aware–they want to appease their young, talented lottery pick.  By being a brat, for lack of a better word, he kind of forced his team’s hand.  So, Westphal is out just seven games into the season, and that’s largely because of Cousins.

DeMarcus, this type of sh!t flies when you’re in your second year with a team that’s put a lot of it’s eggs in your basket, but you’re going to have to grow up eventually.  I guarantee this is the last head coach the Kings will fire due (in part) to your immaturity.  Next time they’ll send you packing.